It was created to power Yahoo's critical applications like Yahoo Mail, Yahoo Finance, Yahoo Sports etc. Then, in 2016, it was open sourced under the Apache Software Foundation.

Pulsar is a multi-tenant, high-performance solution for server-to-server messaging. It's composed of a set of brokers and bookies along with an inbuilt Apache ZooKeeper for configuration and management. The bookies are from Apache BookKeeper which provide storage for the messages until they are consumed.

In a cluster we'll have:

To better understand this, let's have a look at the architecture diagram from the documentation: 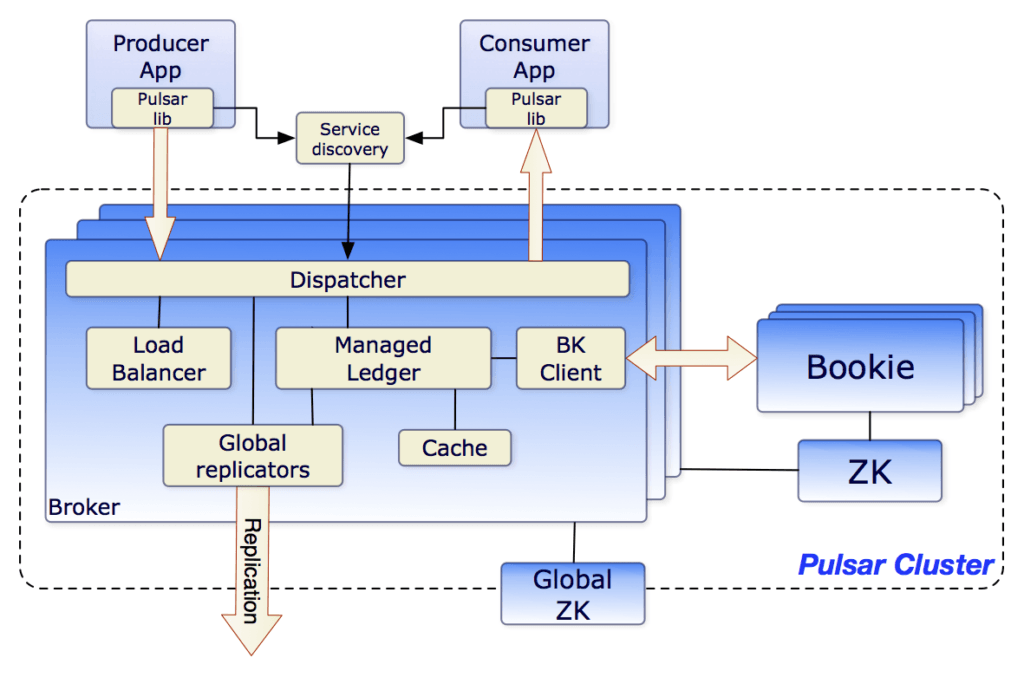 Let's start with a quick look at some of the key features:

Now, let's discuss some of the key features in detail.

The framework provides a flexible messaging model. In general messaging architectures have two messaging models i.e. queuing and publisher/subscriber. Publisher/Subscriber is a broadcast messaging system in which the message is sent to all consumers. On the other hand, queuing is a point to point communication.

Pulsar combines both concepts in one generalized API. The publisher publishes the messages to different topics. Then these messages are broadcasted to all subscriptions.

The consumers subscribe to get messages. The library allows consumers to choose the different ways to consume messages in the same subscription which includes exclusive, shared and failover. We'll discuss these subscription types in detail in the later sections.

Pulsar has inbuilt support for deployment in different environments. This means we can use it on standard on-premise machines, or deploy it in a Kubernetes cluster, Google or AWS Cloud.

It can be executed as a single node for development and testing purposes. In this case, all the components (broker, BookKeeper, and ZooKeeper) run in a single process.

The library provides out of the box support for geo-replication of data. We can enable replication of messages between multiple clusters by configuring different geographical regions.

Message data is replicated in near real time. In case of network failure across clusters, the data is always safe and stored in the BookKeeper. The replication system continues to retry until the replication is successful.

The geo-replication feature also allows the organization to deploy Pulsar across different cloud providers and replicate the data. This helps them to avoid the use of proprietary cloud provider APIs.

After Pulsar reads and acknowledges the data, it guarantees no data loss. Data durability is related to the number of disks configured to store the data.

Pulsar ensures durability by using bookies (Apache BookKeeper instance) running in storage nodes. Whenever a bookie receives a message, it saves a copy in memory and also writes the data to a WAL (Write Ahead Log). This log works in the same way as a database WAL. Bookies operate on database transaction principle and ensure that data is not lost even in case of machine failure.

Apart from the above, Pulsar can also withstand multiple node failures. The library replicates data to multiple bookies, then sends an acknowledgment message to the producer. This mechanism guarantees that zero data loss even in case of multiple hardware failures.

Now let's see how to set up a single node cluster of Apache Pulsar.

Apache Pulsar is available as a binary distribution. Let's start by downloading it:

When the download is complete, we can unarchive the zip file. The unarchived distribution will contain bin, conf, example, licenses and lib folder.

After that, we need to download the inbuilt connectors. These now ship as a separate package:

Let's unarchive the connectors and copy the Connectors folder in the Pulsar folder.

To start a standalone instance we can execute:

5.1. Setting up the Project

We'll start by adding the pulsar-client dependency to our project:

Let's continue by creating a Producer example. Here, we'll create a topic and a producer.

First, we need to create a PulsarClient which will connect to a Pulsar service on a specific host and port, using its own protocol. Many producers and consumers can share a single client object.

Now, we'll create a Producer with the specific topic name:

The producer will send 5 messages:

Next, we'll create the consumer to get the messages created by the producer. The consumer also requires the same PulsarClient  to connect with our server:

Here we've created the client with a Shared subscription type. This allows multiple consumers to attach to the same subscription and get messages.

In the above example of the consumer, we have created a subscription with shared type. We can also create exclusive and failover subscriptions.

The exclusive subscription allows only one consumer to be subscribed.

On the other hand, a failover subscription allows the user to define the fallback consumer, in case one consumer fails, as shown in this Apache diagram: 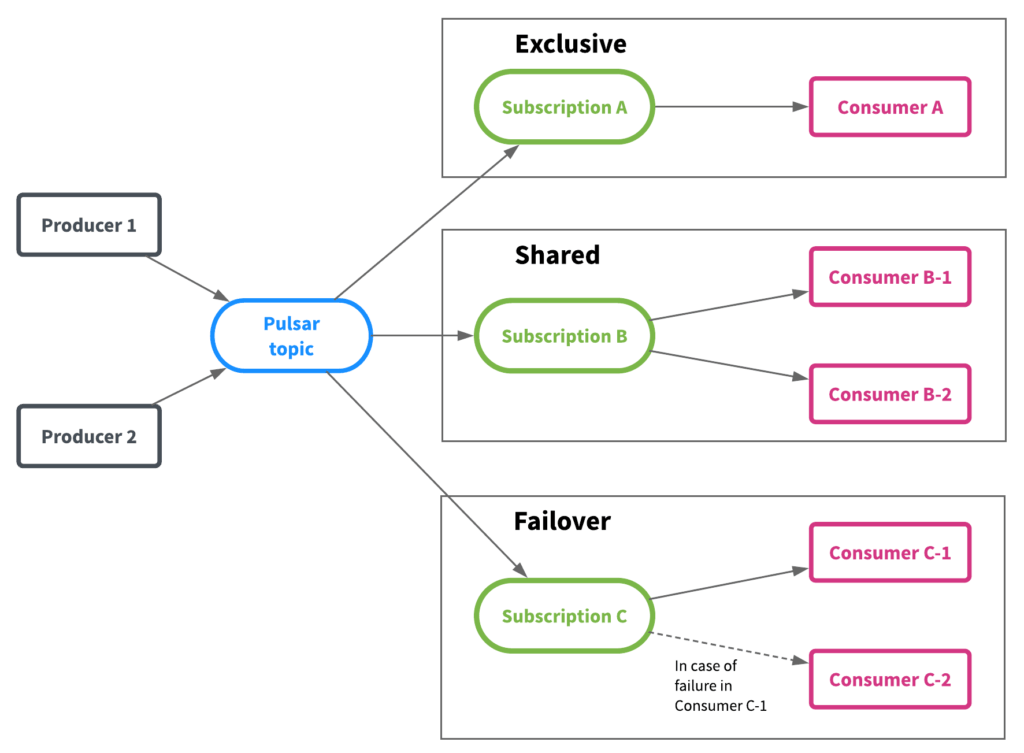 In this article, we've highlighted the features of the Pulsar messaging system such as the messaging model, geo-replication and strong durability guarantees.

We also learned how to set up a single node and how to use the Java client.

As always, the full implementation of this tutorial can be found over on Github.