In this tutorial, we'll compare two of the most popular NoSQL databases – MongoDB and Couchbase. We'll look at the architecture, the list of features, the data model, querying, and how each handles partitioning.

SQL databases have been around since 1970 and have been the de facto databases for quite some time. One of their purposes was to reduce data duplication, as storage wasn't cheap in those days. Horizontal scaling implied lots of maintenance effort for SQL databases, but one could scale vertically by buying a more powerful server.

NoSQL (Not only SQL) databases came around the late 2000s and allowed for easier horizontal scaling. We could now distribute our data on many not-so-powerful machines as computing power was getting cheaper and cheaper. Data here is not stored in tables but in documents (usually in JSON format), and the schema wasn't rigid as in the case of SQL databases.

One of the first NoSQL databases is MongoDB. Its simple setup and ease of use have kept it at the top for quite some time. However, there are new contenders like Couchbase, which comes with easy scaling and high performance.

Let's have a look at the architecture of a MongoDB deployment: 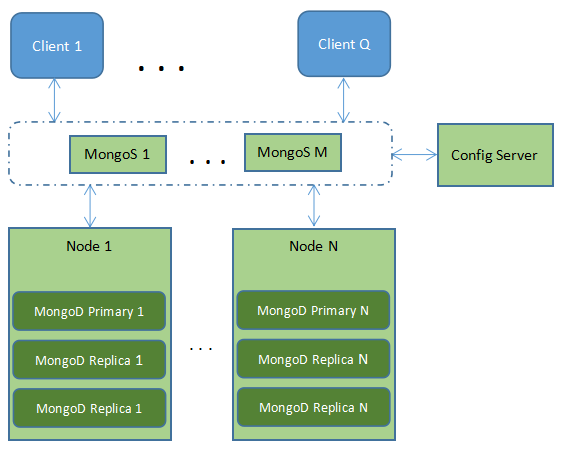 Here, each of the nodes contains a replica set with one primary and two secondary replicas.

Each replica has its own MongoD service, which manages data, index, and query. The MongoS components act as distributed query routers and processors.

Now let's have a look at the Couchbase deployment architecture: 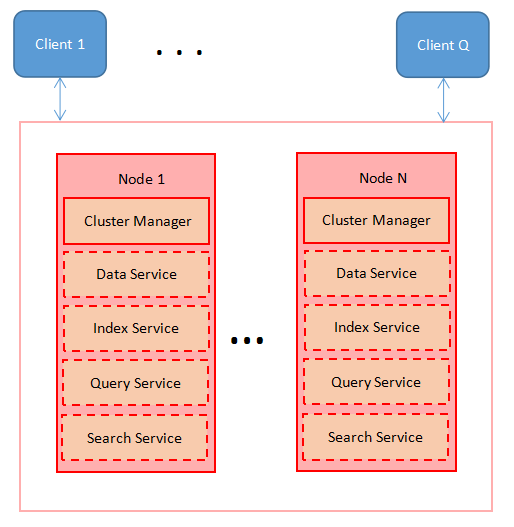 Each node in the Couchbase deployment has a mandatory Cluster Manager. The other service components, namely Data, Index, Query, and Search, can be present or not.

For Couchbase, data is stored in Buckets which are partitioned between the nodes using automatic hashing.

There's no need for a config server, as metadata management is built into the database by design. Scaling out is just a matter of adding more nodes.

Unlike SQL databases, in the case of NoSQL, the data model is not enforced. The documents aren't required to have the same schema. We have the freedom to model each relation however we see fit.

Let's take a look at the modeling of relationships between entities:

The decision of which entity should be embedded in the other and the choice to embed either entities or ids is a key design decision. We take this decision after carefully considering how applications will use our database.

For querying, MongoDB has its proprietary query language, while Couchbase uses N1QL, a language that resembles SQL. Let's take a STUDENT collection for exemplification and see how each database handles the usual command-query operations.

Next is the UPDATE operation in SQL, MongoDB query language, and Couchbase N1QL:

And here's the last of the basic operations – DELETE. Let's see it in SQL, MongoDB query language, and Couchbase N1QL:

We can get an in-depth look at MongoDB queries using Spring Data in our Spring Data MongoDB tutorial.

Partitioning is a key feature of any NoSQL database, and these two make no exception.

MongoDB doesn't partition its data by default. Instead, it keeps all data on a single node. MongoDB does horizontal scaling by splitting the data into subsets (shards), and we can distribute each subset on a different node. The config server manages the configuration for the deployment cluster.

There's no config server in Couchbase. Instead, each node has its Cluster Manager service and can run any of the Data, Index, Query, and Search services. This way, we can achieve great flexibility by distributing computing power where it's needed.

In this article, we explored the similarities and differences between MongoDB and Couchbase.

To sum things up, MongoDB is a great way to start our journey into the NoSQL world. It has a great community around it, and MongoDB University offers lots of training for developers.

On the other hand, Couchbase supports SQL queries and promises great performance and easy scaling.

>> CHECK OUT THE ARTICLE
Persistence bottom

An intro to Spring Data, JPA
and Transaction Semantics Details with JPA
Get Persistence Right with Spring
Download the E-book
Comments are closed on this article!
res – Persistence (eBook) (cat=Persistence)

Download the E-book
Course – LSD (cat=Persistence, !others) – B (ACTIVE)