In this article, we’ll learn about process states in Linux. Particularly, we’ll learn about each of the five different states of a Linux process during the various parts of the lifecycle. Furthermore, we’ll also look into different tools we can use to read the state of each process in our system.

In Linux, a process is an instance of executing a program or command. While these processes exist, they’ll be in one of the five possible states:

To visualize the lifecycle of the process, we can model it in a finite state machine: 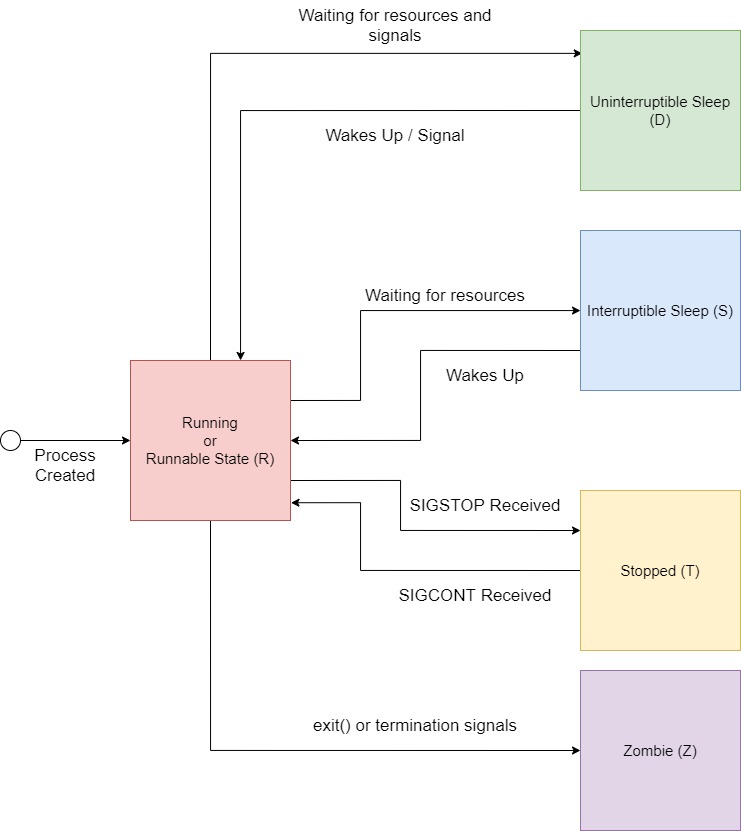 For any Linux process, their starting point is the moment they are created. For example, a parent process can initiate a child process using the fork() system call. Once it starts, the process goes into the running or runnable state. While the process is running, it could come into a code path that requires it to wait for particular resources or signals before proceeding. While waiting for the resources, the process would voluntarily give up the CPU cycles by going into one of the two sleeping states.

Additionally, we could suspend a running process and put it into the stopped state. Usually, this is done by sending the SIGSTOP signal to the process. A process in this state will continue to exist until it is killed or resumed with SIGCONT. Finally, the process completes its lifecycle when it’s terminated and placed into a zombie state until its parent process clears it off the process table.

When a new process is started, it’ll be placed into the running or runnable state. In the running state, the process takes up a CPU core to execute its code and logic. However, the thread scheduling algorithm might force a running process to give up its execution right. This is to ensure each process can have a fair share of CPU resources. In this case, the process will be placed into a run queue, and its state is now a runnable state waiting for its turn to execute.

Although the running and runnable states are distinct, they are collectively grouped into a single state denoted by the character R.

During process execution, it might come across a portion of its code where it needs to request external resources. Mainly, the request for these resources is IO-based such as to read a file from disk or make a network request. Since the process couldn’t proceed without the resources, it would stall and do nothing. In events like these, they should give up their CPU cycles to other tasks that are ready to run, and hence they go into a sleeping state.

From a running or runnable state, we could put a process into the stopped state (T) using the SIGSTOP or SIGTSTP signals. The difference between both signals is that we send the SIGSTOP is programmatic, such as running kill -STOP {pid}. Additionally, the process cannot ignore this signal and will go into the stopped state. On the other hand, we send the SIGTSTP signal using the keyboard CTRL + Z. Unlike SIGSTOP, the process can optionally ignore this signal and continue to execute upon receiving SIGTSTP.

While in this state, we could bring back the process into a running or runnable state by sending the SIGCONT signal.

To display process state using ps, let’s run the ps command to include a column that tells us the state of the process:

The first letter of the value under the STAT column indicates the state that the process is in. For example, the process with PID 2234 is currently in an interruptible sleeping state, as denoted by the character S. Besides that, we can also observe that process 2237 is currently in the running or runnable state.

In Linux, the top command-line tool displays the process details in a real-time fashion. It shows different aspects of the system, such as memory and CPU usage of individual processes. To see the process state, let’s run top in the terminal:

The /proc pseudo filesystem contains all the information about the processes in our system. Hence, we could directly read the state of a process through this pseudo filesystem. The downside of this approach is we’ll first need to know the PID of the process before we can read its state.

To obtain the state of a process, we can extract the value from its pseudo status file under /proc/{pid}/status. For example, we can get the state of the process with PID 2519 by reading the file /proc/2519/status: