The start-up of a Linux operating system follows a step-by-step process. This process starts with the power on or by running a command in the terminal: 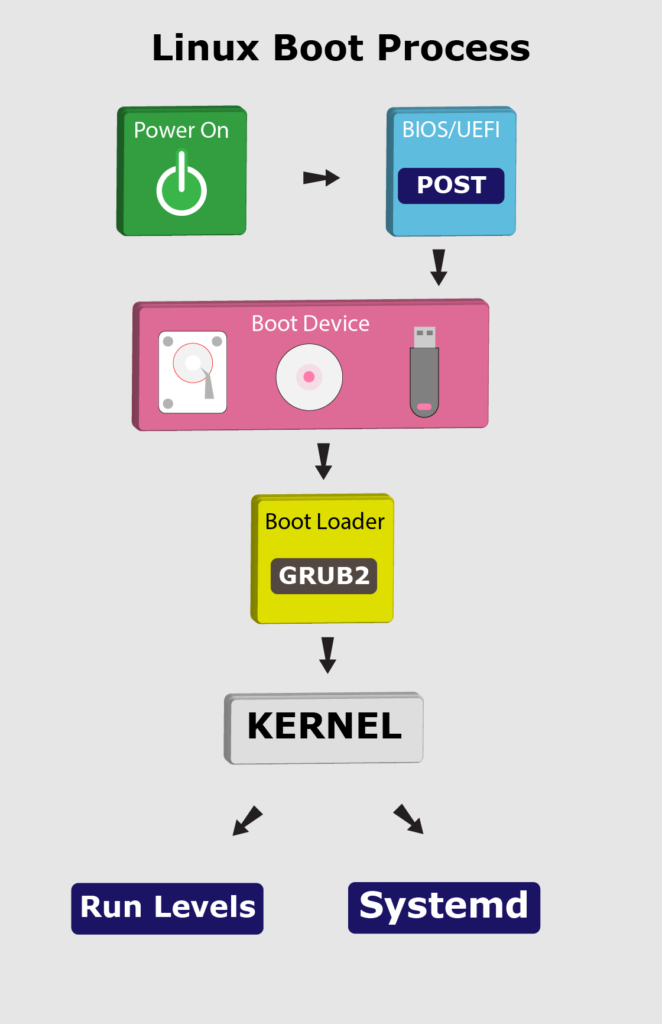 In this tutorial, we’ll go through the booting steps of a Linux system.

First, the BIOS (Basic Input/Output System) or UEFI (Unified Extensible Firmware Interface) program kicks in once the system powers up. Usually, the BIOS contains all the code to gain initial access to the main machine devices:

However, most of these devices will have dedicated device drivers taking over once the system boots fully.

BIOS and UEFI are firmware interfaces that computers use to boot up the operating system (OS). Yet, the two programs differ in how they store metadata on and about the drive:

Next, the BIOS or UEFI runs the power-on self-test (POST). The POST does a series of tasks:

Further, if this test finds any error, it commonly shows an error message on the screen. In case the test fails to detect the RAM, POST triggers a beeping sound.

Finally, if the system passes the POST, it signals the start-up process to the next stage.

Now, the BIOS or UEFI has run the POST to check the state of the machine. Moving on, the BIOS/UEFI selects a boot device depending on the system configuration. Usually, there’s a default boot order:

Of course, we can configure the BIOS or UEFI to choose the boot device in any order. Whatever their order, the computer looks for the boot loader in these devices one by one.

In fact, a BIOS system has the boot loader located in the first sector of the boot device; this is the MBR. It takes up the first 512 bytes on the disk. On the other hand, a UEFI system stores all startup data in an .efi file. The file is on the EFI System Partition, which contains the boot loader.

For example, we can use fdisk to check the system partition on our machine:

The following are some of the available boot loaders for a Linux system:

In general, once the computer finds the boot loader on a device, it will run it. Consequently, this loads a larger and more complex program which eventually starts our operating system.

Let’s highlight some of the boot loaders in use with Linux.

Initially, LILO (Linux Loader) was one of the most widely used Linux boot loaders. However, it has lost favor because it has no support for multi-boot environments and for UEFI. Also, it has limited support for new filesystems.

Officially, the developers of LILO halted its development and support in December 2015. Hence, the Linux Loader is old and mostly obsolete.

Equally, SYSLINUX is a boot loader for the Linux operating system, which runs on a FAT filesystem, typical for a Windows system. In short, its goal is to ease the process of installing Linux for the first time.

In addition, SYSLINUX can support Btrfs and XFS filesystems with some constraints.

Despite the many choices, almost all (non-embedded) modern Linux distributions use GRUB (GRand Unified Boot Loader) because it’s very feature-rich:

Presently, GRUB2 has replaced its past version (GRUB), which is now known as GRUB Legacy. Importantly, we can check for the GRUB version in our system using the following command:

Now, let’s see what GRUB2 does in the boot process:

Notably, the GRUB configuration file is located at /boot/grub by default:

Initially, GRUB Legacy had three stages in the boot process:

However, with GRUB2, these stages don’t exist anymore. Instead, it contains various *.img files that serve similar functions.

At this point, GRUB2 inserts the kernel into memory and turns control of the system over to the kernel.

After going through BIOS or UEFI, POST, and using a boot loader to initiate the kernel, the operating system now controls access to our computer resources.

To reiterate, the kernel initiates the init process, which starts the parent process. Here, the parent of all Linux processes is Systemd, which replaces the old SysVinit process. Following the booting steps, Systemd performs a range of tasks:

Indeed, these and other tasks allow users to interact with the system. Lastly, Systemd uses the /etc/systemd/system/default.target file to decide the state or target the Linux system boots into.

For instance, the target value for a desktop workstation with a graphical user interface (GUI) is 5. This value stands for run level 5 which is graphical.target. Also, the run level for a server without a GUI is 3 because the default target is multi-user.target.

In addition, we can change the target (run level) while the system runs. This change entails that only services and other units defined under that target will now run on the system.

For example, to switch to run level 3 from run level 5, we can run the following command:

Then, to take the system to run level 5, let’s run the command:

This command returns the run level to graphical.target, equivalent to level 5 for GUI.