In this tutorial, we're going to get acquainted with the mechanics of the Counting Sort and then implement it in Java.

Counting sort, as opposed to most classic sorting algorithms, does not sort the given input by comparing the elements. Instead, it assumes that the input elements are n integers in the range [0, k]. When k = O(n), then the counting sort will run in O(n) time.

Please note, then, that we can't use the counting sort as a general-purpose sorting algorithm. However, when the input is aligned with this assumption, it's pretty fast!

Let's suppose we're going to sort an input array with values in the [0, 5] range:

For example, since 5 appears 3 times in the input array, the value for the index 5 is equal to 3.

Now given the array C, we should determine how many elements are less than or equal to each input element. For example:

So if we keep computing the summation of n consecutive elements in C, we can know how many elements are less than or equal to number n-1 in the input array. Anyway, by applying this simple formula we can update the C as the following:

Now we can use the auxiliary array C to sort the input array. Here's how the counting sort works:

In order to sort the sample input array, we should first start with the number 5, since it's the last element. According to C[5], there are 11 elements are less than or equal to the number 5.

Similarly, we can find the right spot for the next element which is 0:

If we keep iterating in reverse and move each element appropriately, we would end up with something like:

First off, given an input array of elements and the k, we should compute the array C:

And here's how the countElements method works:

Also, we can verify that the countElements method works as expected:

Now that we can calculate the frequency array, we should be able to sort any given set of numbers:

Here's how the sort method works:

Similarly, we can verify that the sort method works as expected:

Counting Sort, on the other hand, does not sort the input by comparing the input elements, so it's clearly not a comparison sort algorithm.

Let's see how much time it consumes to sort the input:

If we assume k=O(n), then counting sort algorithm sorts the input in linear time. As opposed to general-purpose sorting algorithms, counting sorts makes an assumption about the input and takes less than the O(n log n) lower bound to execute.

A few moments ago, we laid a few peculiar rules about the mechanics of counting sort but never cleared the reason behind them. To be more specific:

Let's iterate from the beginning to better understand the first rule. Suppose we're going to sort a simple array of integers like the following:

In the first iteration, we should find the sorted location for the first 1: 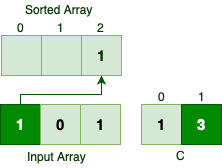 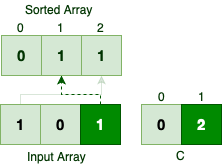 The appearance order of elements with the same value is different in the input and sorted array, so the algorithm is not stable when we're iterating from the beginning.

What happens if we don't decrement the C[i] value after each use? Let's see:

Both occurrences of number 1 are getting the last place in the sorted array. So if we don't decrement the C[i] value after each use, we could potentially lose a few numbers while sorting them!

In this tutorial, first, we learned how the Counting Sort works internally. Then we implemented this sorting algorithm in Java and wrote a few tests to verify its behavior. And finally, we proved that the algorithm is a stable sorting algorithm with linear time complexity.

As usual, the sample codes are available on our GitHub project, so make sure to check it out!

Learning to build your API
with Spring?
Download the E-book
1 Comment
Oldest
Newest
Inline Feedbacks
View all comments
Comments are closed on this article!
res – REST with Spring (eBook) (cat=Java)