In this tutorial, we’ll present a general overview of hostname in the computer network. We’ll also discuss the characters that are allowed to be used in a hostname. With its help, we can uniquely identify a device on the Internet.

A hostname is a name assigned to any networking device. The main purpose of setting a hostname is to give them an identity on the Internet so that the networking devices can communicate and exchange data with each other. It’s a part of a fully qualified domain name (FQDN). An FQDN uses the Domain Name System (DNS) in order to be identified uniquely over the local network.

Let’s look at the structure of the FQDN: 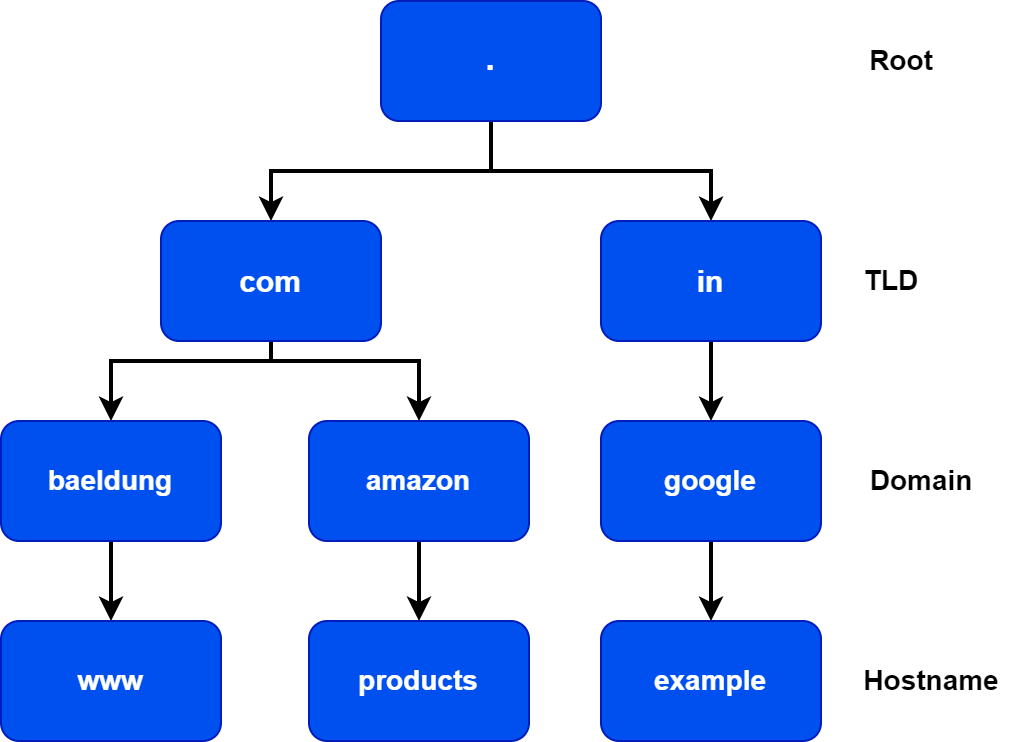 An FQDN starts with a hostname followed by a domain and a top-level domain (TLD).

The syntax for the hostname was first standardized and documented in DoD Internet Host Table Specification. A hostname contains a text string. Each element in a hostname is limited to

characters. There’s a limitation in the size of a hostname as well. A hostname can contain a maximum of

characters, including the dots.

The text string in a hostname must be from ASCII characters. It includes the upper or lower case (A to Z or a to z), digits (

A hostname also shouldn’t end with a period or a dot symbol. When a hostname is an FQDN, we may use the dot symbol as the last character. Finally, there’s no provision of spaces in the hostname.

A good hostname contains theme names and real words in order to increase readability. It’s not a good practice to use a lengthy text or some person’s name for the hostname.

Let’s now see some examples of hostnames. In the URL “drafts.baeldung.com”, “drafts” is the hostname. We can observe it contains all lower case alphabet and follows the rules we discussed.

In modern day-to-day life, we mostly use our mobile devices to open web pages. An example of a web address specifically designed to browse via a mobile phone is “m.fxbkex.com”. Here, “m” is the hostname, and it denotes a mobile device-friendly web address.

Various mail servers use the protocol name as their hostname. For example, “smtp.gmail.com” represents Gmail. Here, “SMTP” is the hostname as well as the name of the protocol used in sending emails by Gmail.

In this short article, we discussed the basic concept of hostname in networking. We presented the standard rules we need to follow when setting a hostname with some examples.