In our daily lives, we have several signals to start and finish a conversation with people. For example, we can handshake a person with which we want to communicate. Moreover, we can friendly say goodbye to another person with waves of a hand, or simply turn our backs to someone and go away.

Similarly, computers have different signals to coordinate communication in a network. For instance, if computers communicate using the Transmission Control Protocol (TCP), SYN, ACK, FIN, and RST messages act as these communication signals.

In this tutorial, we’ll particularly study two communication signals from TCP: FIN and RST. First, we’ll briefly review the communication over TCP, pointing out the messages used to start and finish a communication. So, we’ll in-depth explore the FIN and RST messages, investigating scenarios where they are employed. Finally, we’ll compare FIN and RST in a systematic summary.

TCP operates in the fourth layer (transport) of the OSI model. So, it provides host-to-host communication to several devices and their applications. Furthermore, TCP is a connection-oriented protocol. It means that devices communicating over TCP must establish a connection. Connections, in turn, are established through a handshaking process and enable the connected devices to exchange messages.

To establish, manage, and close a connection, TCP uses control messages that act as signals to the devices:

In this way, a typical communication over TCP starts with a three-way handshake process. This process employs SYN and ACK messages to establish a connection between a client and a server. Thus, the connected entities can exchange messages.

Moreover, the entities acknowledge (ACK) each received message to each other. When the communication ends, a connected entity sends a FIN message to close the connection. So, a FIN handshake process begins. However, if some problem happens with the connection, an entity can abort it by sending an RST message.

A FIN message gracefully requests the termination of a TCP connection. If we compare the connection to a conversation, a FIN message represents an entity declaring: “I said everything I had to say to you. Now, I will listen to you until you say everything you have to say to me”. In technical terms, however, a FIN message triggers a process called FIN handshake.

Let’s consider that a client has connected and communicated with a server. At some point, the client signals to close the connection gracefully. Thus, the FIN handshaking begins:

The following image depicts the previously described steps of a FIN handshake process: 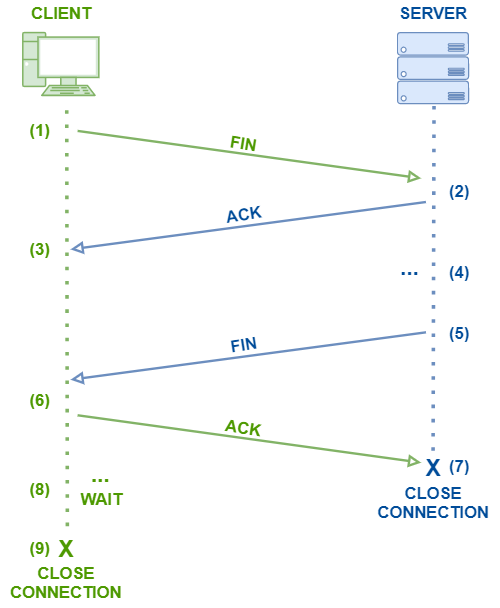 At last, it’s relevant to highlight that the FIN handshake consists of a pair of two-way handshakes: the first one initiated by an entity that sends the first FIN message (step 1); and the second one beginning when the other entity sends a second Fin message (step 5).

Let’s consider the generic scenario of a client communicating with a server. Eventually, an event occurs in the server, and it can’t respond to client messages. So, the server must inform the client through an RST message as follows:

The following image exemplifies the previously outlined steps of aborting a TCP connection: 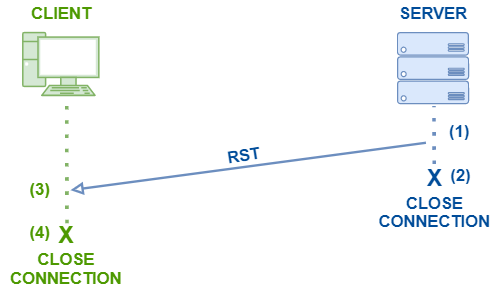 Some particular scenarios in which RST messages can be employed are:

The FIN and RST messages, at a high level, have the same objective: close a TCP connection. However, the termination process and the typical scenarios where these messages are employed differ in multiple aspects.

First, the FIN message triggers a graceful termination, making the connected entities agree to close their connection. The RST message, in turn, closes a connection immediately, requiring no agreement from the other connected entity.

In this way, there are scenarios where closing a connection with FIN or RST is most suitable. In general, when a TCP connection is considered normal (successfully established and the message exchanging occurs with no anomalies), a FIN message is the better option to close it. The FIN process guarantee that the connected entities send and receive all the required messages.

Aborting a connection with RST, in turn, is the better option when, for instance, connection errors raise or an entity receives anomaly messages. In this way, the RST process avoids catastrophic errors and security compromising from occurring.

The following table summarizes the differences between FIN and RST:

We can conclude that FIN and RST play a relevant role in TCP, enabling entities to close connections coordinately in common scenarios or aborting them when they represent some risk.