In this article, we’ll discuss the problem of finding all the simple paths between two arbitrary vertices in a graph.

We’ll start with the definition of the problem. Then, we’ll go through the algorithm that solves this problem.

Finally, we’ll discuss some special cases. We’ll focus on directed graphs and then see that the algorithm is the same for undirected graphs.

Let’s first remember the definition of a simple path. Suppose we have a directed graph

is the set of vertices and

is the set of edges. A simple path between two vertices

is a sequence of vertices

that satisfies the following conditions:

The problem gives us a graph and two nodes,

, and asks us to find all possible simple paths between two nodes

For example, let’s consider the graph: 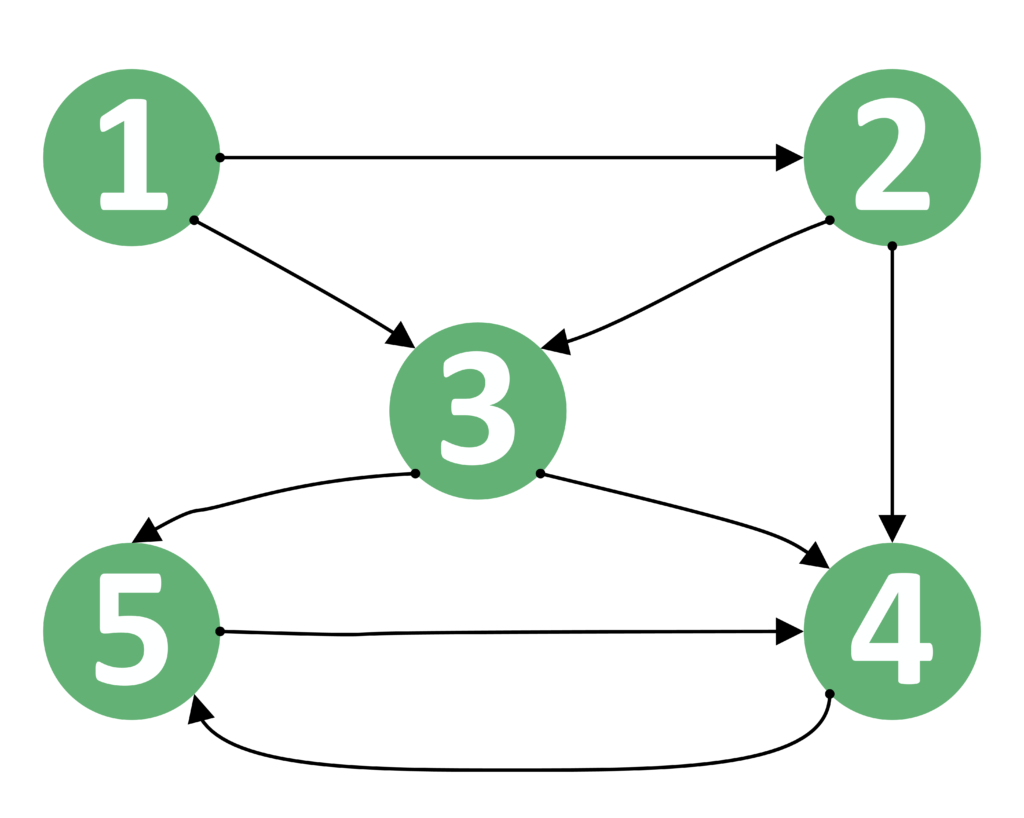 As we can see, there are 5 simple paths between vertices 1 and 4:

Note that the path

is not simple because it contains a cycle — vertex 4 appears two times in the sequence.

The basic idea is to generate all possible solutions using the Depth-First-Search (DFS) algorithm and Backtracking.

In the beginning, we start the DFS operation from the source vertex

Hopefully, we’ll be able to reach the destination vertex

. When this happens, we add the walked path to our set of valid simple paths. Then, we go back to search for other paths.

In order to avoid cycles, we must prevent any vertex from being visited more than once in the simple path. To do that, we mark every vertex as visited when we enter it for the first time in the path. Hence, when we try to visit an already visited vertex, we’ll go back immediately.

After processing some vertex, we should remove it from the current path, so we mark it as unvisited before we go back. The reason for this step is that the same node can be a part of multiple different paths. However, it can’t be a part of the same path more than once.

Let’s take a look at the implementation of the idea we’ve just described:

First of all, we initialize the

values, indicating that no nodes have been visited yet. Also, we initialize the

lists to be empty. The

First, we check whether the vertex

has been visited or not. If so, then we go back because we reached a cycle. Otherwise, we add

to the end of the current path using the

Second, we check if vertex

is equal to the destination vertex

. If so, then we’ve reached a complete valid simple path. Therefore, we add this path to our result list and go back.

However, if we haven’t reached the destination node yet, then we try to continue the path recursively for each neighbor of the current vertex.

Finally, we remove the current node

from the current path using a

as unvisited to allow it to be repeated in other simple paths.

We’ll consider the worst-case scenario, where the graph is complete, meaning there’s an edge between every pair of vertices. In this case, it turns out the problem is likely to find a permutation of vertices to visit them.

For each permutation of vertices, there is a corresponding path. Hence, the complexity is

is the factorial of the number of vertices.

This complexity is enormous, of course, but this shouldn’t be surprising because we’re using a backtracking approach.

However, in undirected graphs, there’s a special case where the graph forms a tree. We’ll discuss this case separately.

Remember that a tree is an undirected, connected graph with no cycles.

In this case, there is exactly one simple path between any pair of nodes inside the tree. Specifically, this path goes through the lowest common ancestor (LCA) of the two nodes. In other words, the path starts from node

, keeps going up to the LCA between

, and then goes to

For example, let’s take the tree shown below: 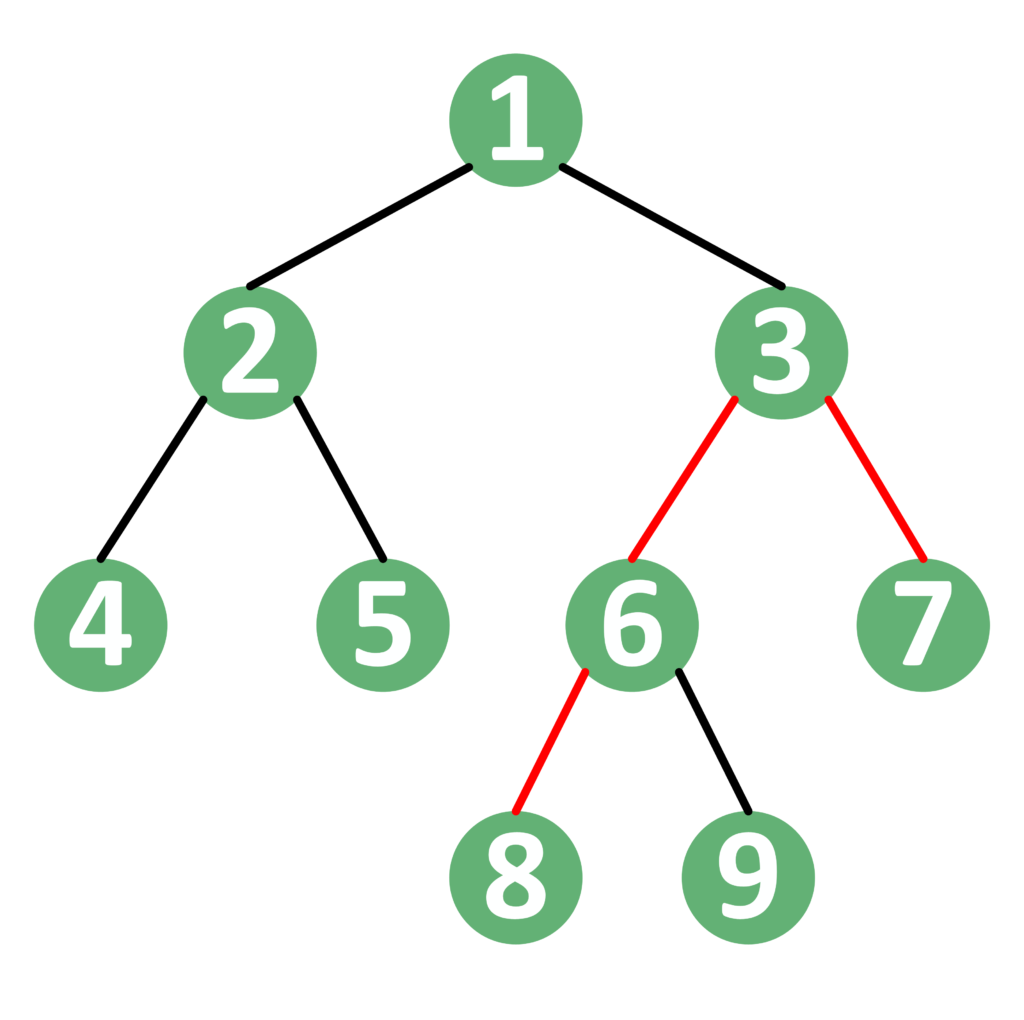 In the general case, undirected graphs that don’t have cycles aren’t always connected. If the graph is disconnected, it’s called a forest. A forest is a set of components, where each component forms a tree itself.

When dealing with forests, we have two potential scenarios. For one, both nodes may be in the same component, in which case there’s a single simple path. The reason is that both nodes are inside the same tree.

For example, take a look at the forest below: 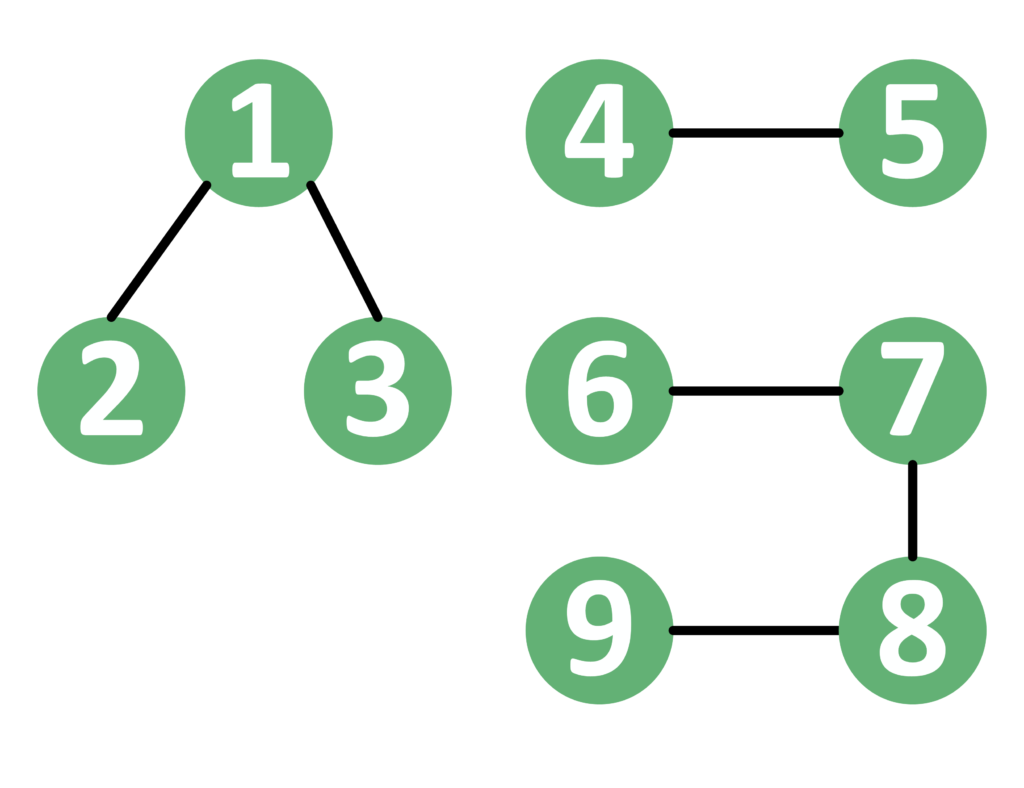 In this graph, there’s a simple path between nodes 2 and 3 because both are in the same tree containing nodes {

}. However, there isn’t any simple path between nodes 5 and 8 because they reside in different trees.

In this tutorial, we’ve discussed the problem of finding all simple paths between two nodes in a graph.

In the beginning, we started with an example and explained the solution to it. After that, we presented the algorithm along with its theoretical idea and implementation.

Finally, we explained a few special cases that are related to undirected graphs.