In this tutorial, we’ll explain the problem and provide multiple solutions to it. In addition, we’ll provide a comparison between the provided solutions.

In this problem, we’re given a weighted, undirected graph. The task is to find the shortest path that starts from a source node

and ends at a goal node

. In addition, the problem requires that the resulting path visits certain nodes, in any order.

Let’s take the following graph as an example: 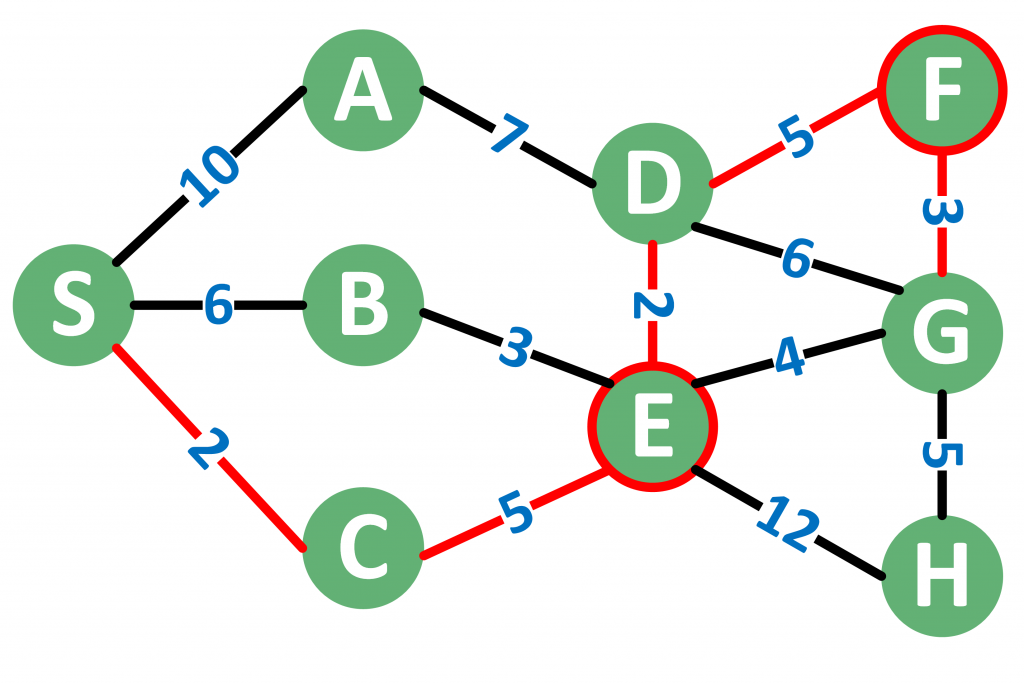 We’ll assume that the source node is

and the goal node is

. Also, the nodes that we must visit are

. We need to find the shortest path for this graph.

We can notice that the shortest path, without visiting the needed nodes, is

with a total cost of 11. However, since we need to visit nodes

, the chosen path is different. We choose the path

nodes. For example, we have another path

, with a total cost of 19. However, we didn’t choose this path since it has a larger cost.

The first solution that we’ll present is a modification to Dijkstra’s algorithm. In our case, it’s not enough to only store the distance of a node from the source. Instead, we must consider the must-visit nodes.

Suppose we arrived at some node

Therefore, we need to update the

array that holds the distance of each node from the source. Instead of being a

array, we need the array to be

. The first dimension will correspond, as before, to the node itself. However, the second dimension will represent a bitmask that can tell us which nodes have already been visited.

Let’s scroll back to the example graph shown above. Suppose the nodes we need to visit are

to have index 0 inside the bitmask, and node

When we reach a certain node, we’ll consider the value of the bitmask. For example, suppose the bitmask had value “01”. In this case, it means we have already visited

, and “11” corresponds to visiting both

Therefore, each node will have many shortest paths from the

node. Each of these shortest paths is the shortest one when visiting a specific set of the needed nodes. We can use the bitwise operators to easily modify the bitmask.

In the end, the final answer will be stored inside the cell of the

array that corresponds to the

node and has all the bitmask’s bits equal to one.

Take a look at the algorithm of the described approach.

As we can see, the

function creates a new node with the given node id, bitmask, and cost.

First, we initialize the

Next, we perform multiple steps. In each step, we get the node with the lowest cost from the queue. If we’ve found a shorter path to this node, we simply continue to the next node.

Otherwise, we iterate over all the neighbors of node

. For each neighbor, we calculate the new bitmask. In case

is not a must-visit node, the bitmask stays the same. Otherwise, we set the bit corresponding to node

bitmask has all its bits equal to zero except the

bit, which equals one.

After that, we calculate the new cost. If the new cost is better than the stored one, we update the

Finally, we return the distance for the

node with a bitmask that has all its bits set to one. The

bit equal to one. By subtracting one, we get the needed bitmask.

The complexity of the described approach is

is the number of vertices,

is the number of edges and

is the number of nodes that we must visit.

node, and the must-visit nodes. Firstly, we need to calculate the shortest path between each pair of the important nodes.

Thirdly, for each permutation, we check the cost of this option. Each option means starting from the

To calculate the shortest paths, we have two options:

Let’s take a look at the implementation of the described approach.

First, we calculate the shortest paths using one of the methods mentioned in the previous subsection. Next, we calculate all the possible permutations of must-visit nodes.

After that, we perform multiple steps. For each permutation, we iterate over all the nodes inside it and calculate the answer. Between every two consecutive nodes, we take the calculated shortest path. When we finish, we calculate the shortest path from the last node to the

is the number of nodes that we must visit and

is the factorial of

. The reason for this is that the number of different permutations is

and we need to iterate over each permutation to calculate its cost.

, which is good in case the graph doesn’t have a lot of edges.

The complexity of using the Floyd-Warshall algorithm is

, which is useful when the graph has a small number of nodes.

Let’s have a quick comparison between the described approaches.

As we can see, all algorithms calculate the needed shortest path.

However, the main idea is to find the algorithm that is able to calculate it with the lowest complexity.

The factors to consider when choosing an approach are

In this tutorial, we presented a modified version of the shortest path problem that must visit certain nodes. Firstly, we gave an example of the described problem. Secondly, we presented multiple solutions to solve the problem.

Finally, we showed a simple comparison between the discussed solutions and illustrated when to use each approach.