There is still no proof of the problem whether

In this tutorial, assuming that

, we’ll learn how to prove the

-Completeness of the problem. Also, we’ll take real algorithmic problems and prove that they are

Let’s classify the decision problems – problems that have the “Yes” or “No” answers.

The problem belongs to class

if it can be solved in polynomial time.

Similarly, the problem belongs to class

if it can be solved in non-deterministic polynomial time. Intuitively, this set of problems is considered to be “hard” problems. Technically, we can’t solve them in polynomial time. However, their “runtime” might be a polynomial.

Reduction of a problem

is a conversion of inputs of problem

to the inputs of problem

. This conversion is a polynomial-time algorithm itself. The complexity depends on the length of the input.

then every “Yes” – input of

converts to “Yes” – input of

converts to “No” – input of

with the reduction algorithm. However, the alternate is that we can also prove that every “Yes” – input of

converts to “Yes” – input of

, instead of working with no inputs. We’ll implement our own reduction algorithms later in the article.

Important to know, the polynomial reduction is a transitive relation. It means, that if problem

. It can be achieved by applying algorithm

first to the inputs to the problem

. Then we’d get the inputs to the problem

and can apply algorithm

to convert those inputs to the input to problem

-Hard if every problem from

polynomially reduces to it. We may assume that

-Hard problems are at least as hard as any problem in

-Complete if it belongs to

, and every problem from

polynomially reduces to it.

As we may notice, every

-Hard. But not every

-Complete. The example of

-Hard but not the

-Complete problem is the Halting Problem. This problem is hard but doesn’t belong to

. Boolean satisfiability (SAT) is the first problem from

that was proven to be

-Complete. We can also find the 3SAT problem definition while reading about the Cook-Levin theorem.

3. Algorithm to Prove That a Problem Is NP-Complete

-Complete problems are the ones that are both in

So, to prove that problem is

-Complete we need to show that the problem:

. A certificate is an answer to our problem. Verifier is a polynomial algorithm that can tell us whether the answer to the problem is “Yes” or “No”.

For instance, let’s take the Hamiltonian Cycle problem. The certificate to the problem might be vertices in order of Hamiltonian cycle traversal. We can check if this cycle is Hamiltonian in linear time. It is called verification. So, the problem belongs to

. Moreover, it can be proven that the Hamiltonian Cycle is

-Complete by reducing this problem to 3SAT.

To show that the problem is

-Hard, we have to choose another

-Hard problem and reduce the chosen problem to ours. Importantly, every

-Complete. Thus, we can also reduce any

Remember, the relation of polynomial reduction is transitive. Therefore, we can reduce just one problem, not all the problems with 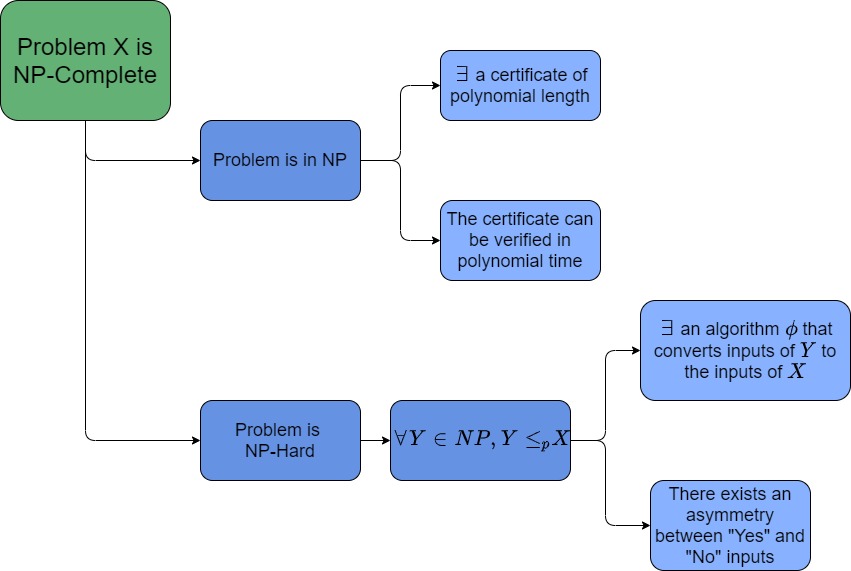 As mentioned, firstly, we have to prove that the problem is in

class. If we cannot prove that, then we cannot move further. The

When we choose a certificate, it must have a polynomial length. So, if the input to our problem is

, but the length of the certificate is

, then we can’t verify this certificate. A verifier algorithm must have polynomial time complexity based on the length of the certificate.

After we checked that our problem is in

, we have to prove that the problem is

-Complete class of problems is the intersection of

-Hard problem, we know that every problem from

polynomially reduces to it.

We should also remember, that the reduction algorithm must convert “Yes” – and “No” – inputs of chosen

-Complete problem to the equivalent “Yes” –  and “No” – inputs of our problem.

Let’s see two examples of proving that the problem is

Here is the 4SAT problem definition:

“Given a Boolean formula, which consists of

clauses, each clause is a disjunction of 4 literals or their negations.  Is there an interpretation of variables such that every clause is satisfied?”

. Suppose the formula has

input variables. It means that the answer and our certificate is an interpretation of

variables. They might be set to true or false. Moreover, we can check whether the formula is satisfied at a linear time. As a result, we verify our certificate in polynomial time. So, the problem is in

Secondly, we have to prove 4SAT is

-Complete, and reduce 3SAT to 4SAT.

Our reduction gadget will be an algorithm, which converts inputs of 3SAT to the inputs of 4SAT.

Given an input 3SAT formula

, we construct the input formula

of 4SAT by expanding each clause with the new variable:

If a given clause

can be either true or false. Thus, if

is satisfied. Let the satisfiable interpretation of

consists of assignments of each variable.  Then

must be true under

have different values. If variable

is false and vice versa. So,

must be true under

Finally, we’ve proved 4SAT is in

-Hard. Therefore, we can say that 4SAT is

In graph theory, the Independent Set is a problem of finding a set of vertices of size

in a graph, such that no two of which are adjacent.

Let’s prove this problem belongs to

. The certificate of the problem might be a set of chosen vertices. We can check in polynomial time whether any two of them are adjacent or no. Therefore, the problem is in

5.2. Reduction of 3SAT to Independent Set

Suppose we have a 3SAT input formula, consisting of

Let’s now reduce the 3SAT to Independent Set by building a graph, which would have an independent set of size

if and only if the given formula is satisfied. To do it, for each clause, we create a triangle graph and add the edges to all pairs of vertices, which consist of the variable and its negation:

If a given formula is satisfied, then at least one variable in each clause is true. Let

be a set of such true variables. The formula consists of

is the size of

, and the set of corresponding vertices in a built graph is independent and has a size of

Next, if the graph has an independent set

, we know that it has one node from each “clause triangle.” We can set chosen variables to true. This is possible because no two are negations of each other, and the boolean formula will be satisfied.

We’ve proved already that the Independent Set problem is in

-Hard. Therefore, we can say that the Independent Set is