Prime numbers have always been an interesting topic to dive into. However, no one has been able to find a clean and finite formula to generate them. Therefore, mathematicians have relied on algorithms and computational power to do that. Some of these algorithms can be time-consuming while others can be faster.

In this tutorial, we’ll go over some of the well-known algorithms to find prime numbers. We’ll start with the most ancient one and end with the most recent one.

Sieve of Eratosthenes is one of the oldest and easiest methods for finding prime numbers up to a given number. It is based on marking as composite all the multiples of a prime. To do so, it starts with

as the first prime number and marks all of its multiples (

). Then, it marks the next unmarked number (

) as prime and crosses out all its multiples (

). It does the same for all the other numbers up to 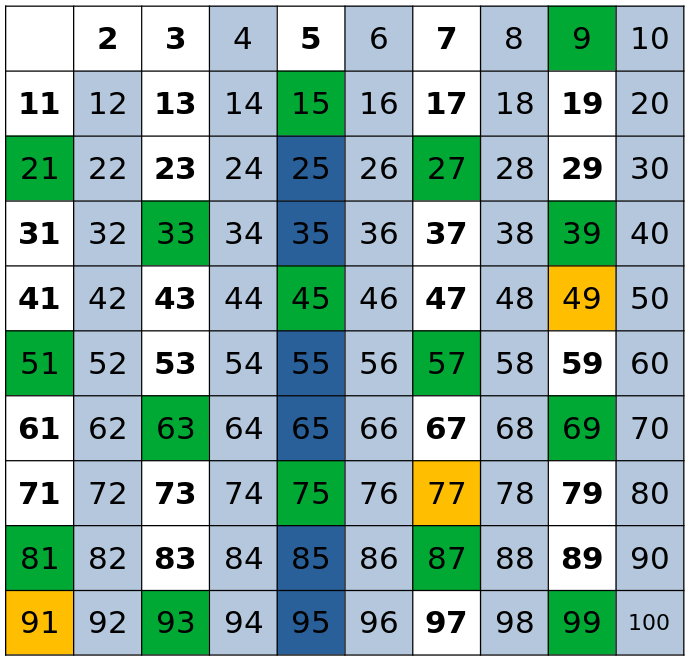 However, as we can see, some numbers get crossed several times. In order to avoid it, for each prime

, we can start from

to mark off its multiples. The reason is that once we get to a prime

in the process, all its multiples smaller than

have already been crossed out. For example, let’s imagine that we get to

have already been marked off by

. As a result, we can begin with

We can write the algorithm in the form of pseudocode as follows:

In order to calculate the complexity of this algorithm, we should consider the outer

loop and the inner

loop. It’s easy to see that the former’s complexity is

. However, the latter is a little tricky. Since we enter the

number of times, with

being the current prime number. As a result, we’ll have:

In their book (theory of numbers), Hardy and Wright show that

. Therefore, the time complexity of the sieve of Eratosthenes will be

This method follows the same operation of crossing out the composite numbers as the sieve of Eratosthenes. However, it does that with a different formula. Given

, first we cross out all the numbers of the form

. After that, we double the remaining numbers and add

. This will give us all the prime numbers less than

. However, it won’t produce the only even prime number (

Here’s the pseudocode for this algorithm:

We should keep in mind that with

as input, the output is the primes up to

. So, we divide the input by half, in the beginning, to get the primes up to

loop, which runs for

times, and the inner

loop, which runs for less than

This looks like a lot similar to the complexity we had for the sieve of Eratosthenes. However, there’s a difference in the values

can take compared to the values of

in the sieve of Eratosthenes. While

could take only the prime numbers,

can take all the numbers between

. As a result, we’ll have a larger sum. Using the direct comparison test for this harmonic series, we can conclude that:

As a result, the time complexity for this algorithm will be

Sieve of Atkin speeds up (asymptotically) the process of generating prime numbers. However, it is more complicated than the others.

First, the algorithm creates a sieve of prime numbers smaller than 60 except for

. Then, it divides the sieve into

separate subsets. After that, using each subset, it marks off the numbers that are solutions to some particular quadratic equation and that have the same modulo-sixty remainder as that particular subset. In the end, it eliminates the multiples of square numbers and returns

along with the remaining ones. The result is the set of prime numbers smaller than

We can express the process of the sieve of Atkin using pseudocode:

It is easy to see that the first three

loops in the sieve of Atkin require

operations. To conclude that the last loop also runs in

time, we should pay attention to the condition that will end the loop. Since when

, which is a multiple of a square number, are greater than

, we get out of the loops, they both run in

time. As a result, the asymptotic running time for this algorithm is

Comparing this running time with the previous ones shows that the sieve of Atkin is the fastest algorithm for generating prime numbers. However, as we mentioned, it requires a more complicated implementation. In addition, due to its complexity, this might not even be the fastest algorithm when our input number is small but if we consider the asymptotic running time, it is faster than others.

In this article, we reviewed some of the fast algorithms that we can use to generate prime numbers up to a given number.