There are various optimization algorithms in computer science, and the Multi-Verse Optimization Algorithm (MVO) is one of them.

In this tutorial, we’ll take a look at what this algorithm means and what it does.

Then, we’ll go through the steps of the MVO algorithm. Finally, we’ll use a numerical example to demonstrate the solution to an optimization issue using MVO.

2. What Is the Multi-Verse Optimizer?

MVO is a population-based algorithm and a meta-heuristics algorithm based on the concepts of the multi-verse theory. As implied by the name, Seyedali Mirjalili introduced this approach for solving numerical optimization issues in 2015. The MVO algorithm is a physics-inspired technique, in particular, it’s inspired by the three main concepts of the multi-verse theory: white holes, black holes, and wormholes.

The term multi-verse stands opposite to the universe and challenges the notion of uniqueness, which refers to the existence of additional worlds in addition to the one in which we all live. So, there might be duplicates, not only of objects but also of me, you, and everyone else.

Although a white hole has never been observed in our world, the big bang may be regarded as a white hole and maybe the primary component in the formation of a universe. In addition, it is known in the cyclic model of the multi-verse theory that white holes (big bangs) are generated where parallel universes collide. Here’s an example of white holes:

Black holes, which have been discovered on several occasions, act radically differently from white wholes. With their tremendously strong gravitational pull, they attract everything, including light beams. The image below represents an example of black holes:

Wormholes are holes that link various sections of the universe. They operate as time/space travel tunnels in the multiverse approach. Items may move instantly between any two corners of a universe or even from one universe to another via these tunnels. Here’s an example of wormholes:

3.4. Rules of Universes in MVO

Let’s take a look at the principles that we apply, during the optimization process, to the universe of MVO:

Let’s divide the search procedure, which is used by a population-based algorithm, into two parts: exploration and exploitation. In order to explore search spaces through MVO, we use the ideas of a white hole and a black hole. Wormholes, on the other hand, help MVO exploit the search spaces.

Each solution is equivalent to a universe, and each variable in that world is an object. Furthermore, we apply an inflation rate to each solution that is proportional to the solution’s associated fitness function value.

We employ a roulette wheel mechanism to describe the mathematical model of the white and black hole tunnels, as well as the movement of objects across universes. The roulette wheel table, which is a game of chance, contains

. The color of number

is green and the others colored with

black. The graph below presents the roulette wheel: 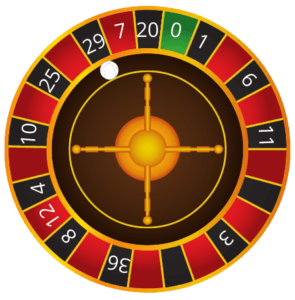 So, we use the roulette mechanism to choose one universe among all for the white holes. At each iteration, we´ll sort the universe according to their fitness value (inflation rate) and select one using roulette.

According to multi-verse theory, we have more than one universe:

The model below shows the mathematical model that we can use for the selection of one universe using the roulette wheel selection mechanism:

is a random value in the interval

Using this mechanism universes can exchange objects with each other without any disorganization.

As we said before, the wormholes act as tunnels in between the black hole and white hole. So, let’s assume that each universe has wormholes to assure the exchange randomly of objects through space. The wormholes randomly change objects without consideration of their inflation rates. Let’s now suppose that wormhole tunnels are always established between a universe and the best universe (to provide local changes to each universe). Let’s discover the formulation of this mechanism:

variable of the fittest universe created,

random numbers in the interval

The equations below represent the

Let’s now take a look at the implementation of the MVO optimizer and its tile complexity.

The algorithm below represents the multi-verse optimizer:

As we can see in the algorithm, the population size (number of universes) and the maximum number of iterations are needed as inputs in order to get the Best Universe and its Fitness value as the output of the algorithm.

We start by initializing the parameters {

} and the population size

}. Then, we evaluate each solution by calculating its value using the fitness function. After evaluating each solution in the population, we assign the best solution according to its value. Afterward, we update the parameters

In order to select one universe among N, we use the roulette wheel selection mechanisms as a white hole. Then, we use a wormhole as a tunnel for object exchange between different universes. We repeat the overall operations until the stopping criteria are matched, which means we will check the current iteration until we reach the maximum number of iterations to return the best global solution.

), the number of universes (

), and the number of objects (

). So, the equation below represents the time complexity of this algorithm:

In more detail, we employ the QuickSort algorithm in every iteration, which has the complexity of

in the worst case.  In addition, we use the roulette wheel mechanism for every variable in every universe over the iterations, which has the complexity of

in the worst case. Let’s reconstruct the time complexity of the multi-verse algorithm using the complexity of Quick Sort and roulette wheel mechanism:

To understand the multi-verse optimizer algorithm, we use a numerical example.

. Afterward, we initialize all the parameters using a random set of values:

Here’s the initial position for the four universes (

Here’s the fitness function in order to compute the fitness value for each universe and select the Best Universe:

Let’s calculate the fitness value for each universe in the current population using the fitness function:

is the best solution for the first iteration. Let’s move forward to update the parameters of

We need to select one universe among N by using the roulette wheel selection mechanism as a white hole based on the mathematical model below:

is chosen at random from the interval

. So, to elect one among all for the white hole, we apply the two rules below:

In other words, the fitness value with the highest value represents the only white hole. At each iteration, we’ll sort the universe according to the fitness value. The table below depicts the choosing of one white hole as the second universe, while the other universes are black holes: 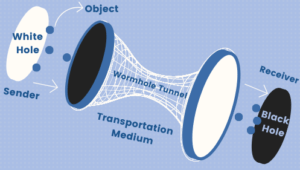 So, the wormholes act as time/space travel tunnels between different universes based on the mathematical model below:

are chosen at random from the interval

. This means the best universe formed with the

Let’s now check the maximum iteration and the current iteration then we repeat the steps above until reaching the criteria. After the repetition of the loop, we got the best optimum value

as the best universe.