We can formulate a reinforcement learning problem via a Markov Decision Process (MDP). The essential elements of such a problem are the environment, state, reward, policy, and value.

A policy is a mapping from states to actions. Finding an optimal policy leads to generating the maximum reward. Given an MDP environment, we can use dynamic programming algorithms to compute optimal policies, which lead to the highest possible sum of future rewards at each state.

Dynamic programming algorithms work on the assumption that we have a perfect model of the environment’s MDP. So, we’re able to use a one-step look-ahead approach and compute rewards for all possible actions.

In this tutorial, we’ll discuss how to find an optimal policy for a given MDP. More specifically, we’ll learn about two dynamic programming algorithms: value iteration and policy iteration. Then, we’ll discuss these algorithms’ advantages and disadvantages over each other.

. Then, we iteratively evaluate and improve the policy until convergence: 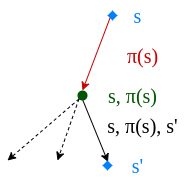 by calculating the state value function

is the reward generated by taking the action

is a discount factor for future rewards and

is the transition probability.

In the beginning, we don’t care about the initial policy

being optimal or not. During the execution, we concentrate on improving it on every iteration by repeating policy evaluation and policy improvement steps. Using this algorithm we produce a chain of policies, where each policy is an improvement over the previous one:

Since a finite MDP has a finite number of policies, the defined process is finite. In the end, converging an optimal policy

and an optimal value function

In value iteration, we compute the optimal state value function by iteratively updating the estimate 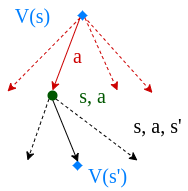 We start with a random value function

Hence, we look-ahead one step and go over all possible actions at each iteration to find the maximum:

Instead of evaluating and then improving, the value iteration algorithm updates the state value function in a single step. This is possible by calculating all possible rewards by looking ahead.

The value iteration algorithm is guaranteed to converge to the optimal values.

in a reinforcement learning environment. They both employ variations of Bellman updates and exploit one-step look-ahead:

In policy iteration, we start with a fixed policy. Conversely, in value iteration, we begin by selecting the value function. Then, in both algorithms, we iteratively improve until we reach convergence.

We use MDPs to model a reinforcement learning environment. Hence, computing the optimal policy of an MDP leads to maximizing rewards over time. We can utilize dynamic programming algorithms to finding an optimal policy.

In this article, we’ve investigated two algorithms to find an optimal policy for an MDP. Policy iteration and value iteration algorithms work on the same principle. We’ve discussed their advantages and disadvantages over each other.