In this tutorial, we’ll take a closer look at the divide and conquer-based efficient sorting algorithm known as Merge sort. To begin, we’ll examine two distinct Merge Sort approaches, top-down and bottom-up in-depth, both of which are vital.

Later, we’ll go over the implementation of bottom-up and top-down approaches and how they work. To summarize, we’ll show how to use specific merge sort algorithms using simple examples, as well as their time and space complexity.

As the name implies, this approach begins at the top of the array tree and works its way down. Consequently, halving the array, making a recursive call, and merging the results until it reaches the bottom of the array tree. The term “recursive approach” also applies to the top-down merge sort method.

Top-down merge sort begins with an array of inputs. It divides the input array in half. Further, it calls merge sort recursively on the array’s halves. Finally, we merge the array halves into a final result array, which returns the merged output array.

This recursive method’s base case is if the length of the array to sort is indivisible into two, in which case no recursive call to sort or merge the array halves is required.

To better understand how Top-down merge sort works, consider the example shown below: 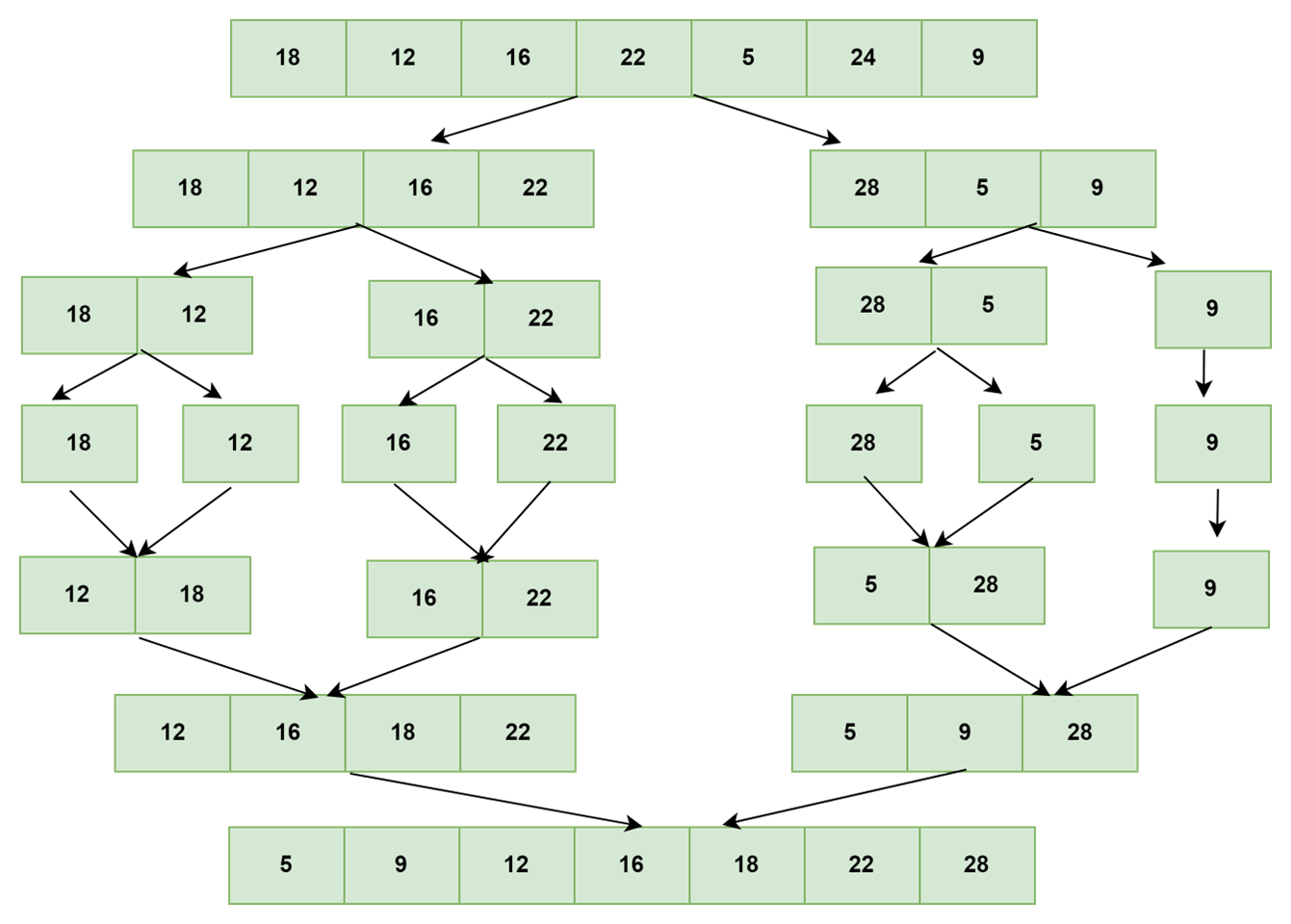 In fact, the merge sort divides an array into subarrays and merges them recursively. Furthermore, the dividing process is repeated until a sub-sequence with a single item is obtained.

Afterward, a single-item sequence is easily sorted. The entire process is finished during the merge stage, which joins two sorted lists to create a single array with sorted items. The merging process turns out to be quite simple to put into action.

In a nutshell, recursion is a method employed in the top-down merge sort approach. As it descends from the top of the tree, it divides the array in half, makes recursive calls, and merges the outcomes until it reaches the bottom.

Merge Sort always divides the array into two halves, and it takes linear time to merge the two halves, so its time complexity is

When merging two sorted arrays into a single array, we need space to store the merged result.

space in total because the arrays we’ll be combining have

items. However, because we’re using recursion calls and this additional array will be copied

times, the space complexity, in this case, is

The Bottom-Up merge sort method employs the iterative technique. It starts with a single-element array and then merges and sorts two nearby items. The merged arrays are merged and sorted again until there is only one unit of the sorted array left. In other words, recursion is not used in the bottom-up implementation. It starts at the bottom of the tree and works its way up by iterating over the pieces and merging them.

passes, the time complexity is

, and the space complexity is

due to the use of an auxiliary array in the merge routine. We reduced the space complexity in this version, making it superior to the recursive one.

This article discussed one of the most widely used sorting algorithms, merge sort. We went over the two merge sort approaches in depth. To better understand their implementation, we explain top-down and bottom-up approaches with examples and algorithms.

Finally, we presented the time and space complexity of both approaches. As a result, readers will have a clear grasp of merge sort approaches and their potential applications.