In this tutorial, we’ll introduce one of the algorithms of finding the lowest common ancestor in a directed acyclic graph. Also, we’ll talk about its time complexity.

Moreover, we’d see the difference in the algorithms of finding the lowest common ancestor in an undirected tree and in a directed acyclic graph. We assume having a basic knowledge of graphs and Big-O notation.

Let’s briefly remember the main definitions of a directed acyclic graph (DAG). A pair of vertices

is an edge. Furthermore, this edge has a direction from

is not reachable from

The DAG is a graph, which contains no directed cycles. It means, that there is no vertex

, such that we can find a path from

and reach this vertex again.

The interesting thing is that we can build a DAG, but the corresponding undirected graph may or may not contain a cycle: 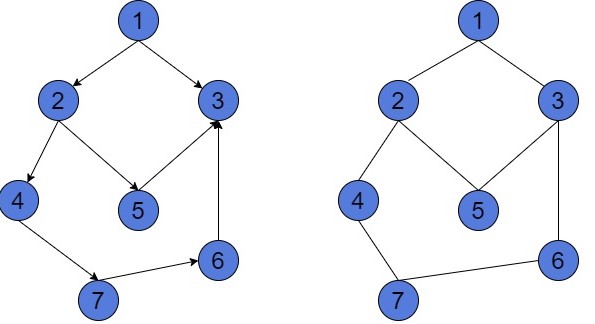 The graph to the left is DAG. It contains no directed cycles. To prove it, we may have a look at each contour and see this is not a cycle. For instance, the contour

is not a cycle, because the edge

doesn’t exist in this graph. We have only edge

. Similarly, we can prove that the other contours aren’t cycles.

However, if we’d remove the orientation of vertices, we’ll get the undirected graph to the right. This graph contains 3 cycles

. This happens because edges are undirected. And for every connected pair of vertices

we may assume that both edges

But, we can also build a DAG, such that the corresponding undirected graph will be acyclic: 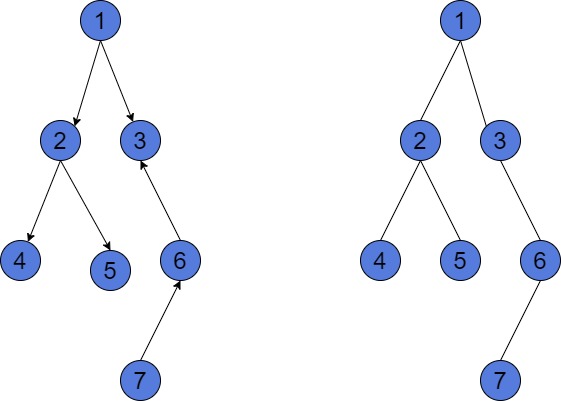 Both graphs in the picture are acyclic. The condition of an undirected graph of

vertices to be acyclic is to have at most

edges. Assume we have a DAG of

or fewer edges. So, we can be sure that the removal of its orientation will result in an acyclic graph as well.

However, the directed acyclic graph might have up to

Finding the lowest common ancestor (LCA) is a typical graph problem. It only makes sense to search for LCA in a rooted tree. However, the algorithms differ a bit from each other, depending on the type of the graph. Let’s shortly remember the problem definition.

The LCA between two nodes

in a graph is the deepest node

, such that it is an ancestor of both

. In case DAG is a special case of a graph, the might be 0, 1, or more LCAs between any two nodes. However, in an undirected tree, there will be exactly one LCA candidate.

Is important to notice, that for any nodes

There are 3 numbers at each vertex of a graph in the picture. Those are the value of a vertex, and an in-degree and out-degree to the left and to the right of each value respectively. There are two sources in such a graph: 0 and 2. They both have zero in-degree. Also, there are three leaves: 3, 5, and 6. They have zero out-degree.

Is important to notice, the graph on the picture looks ordered. Actually, every directed acyclic graph has a topological order. Such an order of vertices might help us to better understand the algorithms.

A depth of a node

in a directed acyclic graph,

, is the length of the longest path from the source node to

. Also, there might be more than one source node. To compute the depth of each node, we can perform a Breadth-First Search (BFS). Here is an example of how depth can differ in similar DAGs:

As we’ve mentioned, there might be more than one lowest common ancestor between two nodes. The numbers of LCAs in the directed acyclic graph might be between 0 and

is the number of vertices:

In the graph of 7 vertices, the

, because both 1 and 2 has equal depths. The

If we want to find the LCA between a vertex and its ancestor, the LCA will be the ancestor. Thus, for instance, the

In the other graph, there exists no LCA between vertices 3 and 5. They have no parents in common.

4. Approach of Finding LCA in DAG

We’ll introduce a simple algorithm, which is able to find all the lowest common ancestors between two given nodes of a graph.

Suppose we want to find the

. Initially, all the vertices are colored white.

First, we do a Depth-First Search (DFS) on one of the target nodes. Let it be node

. Also, we’ll keep track of the parent’s array (current path from a starting vertex). During the DFS, we color all the ancestors of

in red each time we reach it.

Second, we should start the DFS on the other node

. When we reach it, we recolor all red ancestors of

Finally, we built a subgraph, induced by the black nodes. The nodes in a new graph with zero out-degrees are the answers.

This is our initial graph. Suppose we want to find the LCA(4, 7). We start a DFS and color all parents of either 4 or 7 in red. For example, let’s choose vertex 7:

As we may see, node 7 has 5 parents. Then, we should color all parents of another node, which is 4, in black. For better understanding, we’ll first find all the ancestors of 4: 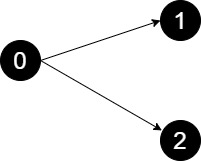 Now, we may see that two nodes 1 and 2 have zero out-degree. Therefore, they are the answer to our problem. The

We’ll assume we have the only source node in our graph.

The time complexity of such an algorithm is

is the number of edges in DAG

in DAG. During the algorithm, we sequentially do the DFS twice. After that, we built a subgraph, induced by the black nodes. Their amount might be at most

. The number of edges in a new subgraph might also be a

. Finding the nodes with zero out-degree will take  O(V) time.

So, the total time complexity of our algorithm is

However, if we’d have more than one source node, the time complexity will increase up to

represents that we should start DFS from all source vertices. Their amount might be up to

. Then, we’ll have to find the intersection of all ancestors from all searches to find all the parents of a node.

In this article, we introduced one of the algorithms for finding the LCA between two vertices in a directed acyclic graph. Moreover, we noticed the difference in terminology and problem definition for the LCA problem for undirected trees and DAGs. Furthermore, we discussed our algorithm time complexity. Of course, there exist more efficient algorithms with precomputation techniques. However, they are not much faster than the proposed brute-force solution.