In this tutorial, we’ll explain what’s a loop invariant and how we can use it to prove the correctness of our algorithms.

2. What’s a Loop Invariant For?

A loop invariant is a tool used for proving statements about the properties of our algorithms and programs. Naturally, correctness is the property we’re most interested in. We should be sure that our algorithms always produce correct results before putting them to use.

3. What’s a Loop Invariant and How Do We Prove It?

A loop invariant is a statement about an algorithm’s loop that:

3.1. How to Formulate a Loop Invariant?

Let’s say that we want to sum an array of real numbers:

To be sure that our algorithm works, we should prove that after the loop ends,

is equal to the sum of the numbers in

At the beginning of the

is equal to the sum of the first

How do we check if this is a good invariant? We should verify that the invariant, applied to

after the loop, describes the correct solution. In this example, the loop ends when

, so the invariant states that at the end of the loop

which is what we want our algorithm to return. So, we identified the invariant we should prove, but, how do we come up with proof?

3.2. How to Prove a Loop Invariant

Proving an invariant is similar to mathematical induction.

The requirement that the invariant hold before the first iteration corresponds to the base case of induction.

The second condition is similar to the inductive step.

But, unlike induction that goes on infinitely, a loop invariant needs to hold only until the loop has ended.

Unfortunately, as each algorithm is unique, there is no universal recipe for writing proofs. All the proofs will have the same structure:

but each step in the process will depend on the actual algorithm: 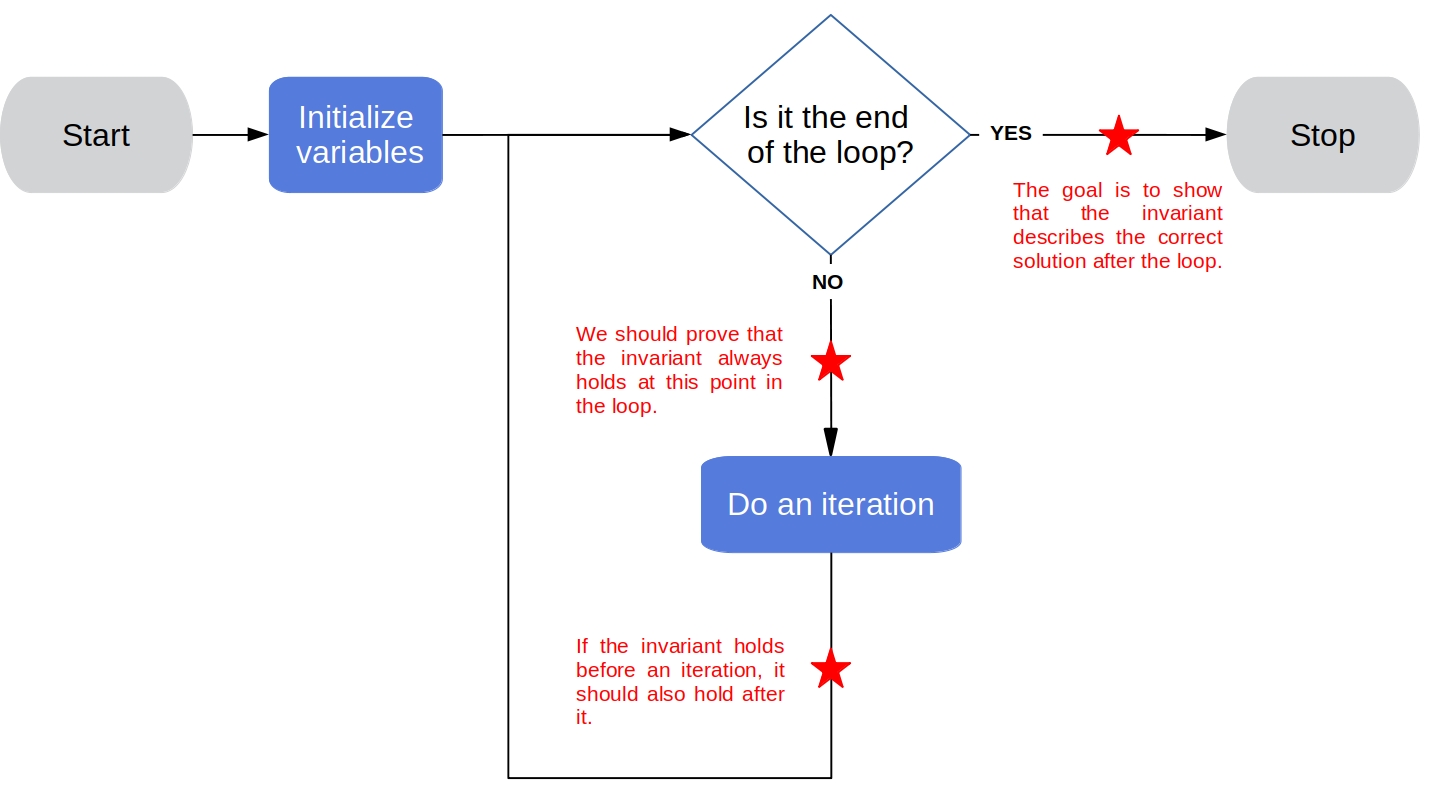 For Algorithm 1, we’d prove the invariant in two steps.

At the beginning of the loop,

is the sum of no numbers. We can use

as its value, so we see that the invariant holds before the first iteration.

During the iteration, we add

at the end of the iteration. The end of iteration

is the same as the beginning of iteration

, so the second condition is also fulfilled.

As we’ve shown that

at the end of the loop, proving the invariant also verified that our algorithm was correct.

If the loop is a for–loop, the beginning of an iteration is the point after the loop counter is incremented, but before the loop termination test. That also applies to checking the invariant before the loop.

Let’s say that we have two

). The result of their addition is an

. We can calculate each digit

together with the carryover from

To verify its correctness, we’ll use a loop invariant which states that

is the correct result:

At the beginning of the

is the sum of

Would proving this invariant make sure that the returned variable,

, really is the correct solution? At the end of the loop,

, so per the invariant, the number

would be the sum of

. This means that we chose the right invariant for if we prove it, then we’ll also prove that our algorithm is correct.

4.2. Prove the Invariant Holds Before the First Iteration

Before the first iteration of the main loop,

. Since there is no digit

to be the solution and the only digit. Similarly, there are no digits

so we practically have no numbers to add. We can treat the sum of no numbers as being equal to

. So, the invariant is true before the first iteration.

4.3. Prove the Invariant Remains True After Each Iteration

If the invariant holds at the beginning of iteration

, does it hold at the beginning of iteration

is indeed the sum of

. How do we compute digit

together with the carryover term

from the last iteration in which we computed

, the integer remainder is digit

and the quotient is the carryover term

The Insertion Sort Algorithm is an

At the start of each iteration of the for–loop, the subarray

consists of the elements originally in

, but in sorted order.

Is this a good invariant? At the end of the for–loop,

, so the invariant will state that the whole

5.2. Prove the Invariant Holds Before the First Iteration

before the first iteration. So, the invariant claims that [

] is a sorted array. It (trivially) holds just as we assumed that zero can be taken as the sum of no numbers.

5.3. Prove the Invariant Remains True After Each Iteration

and that we set

at the beginning of an iteration. We need to prove that after the inner while–loop, the elements

are lower than or equal to

We can formally prove that by proving the corresponding loop invariant for the while–loop. But, informally, we see that the while–loop moves the elements of

. When the loop stops, that’s because it found the element (

) which is lower than or equal to

. Therefore, all the elements which were moved to the right, and those are

. All those unaffected by the while–loop are lower than

, the whole subarray will be sorted.

In proving that an invariant holds before the first iteration, we usually rely on statements such as:

Those are the statements we can take to be true without proof. They’re called trivial and are widely used in proving base cases.

In this article, we explained what’s a loop invariant and showed how to prove it. We also worked out a couple of examples to illustrate how we can use a loop invariant to verify an algorithm’s correctness.