There are several approaches to determine whether a list of polygon points is ordered clockwise or counterclockwise.

In this tutorial, we’ll create a simple algorithm to determine the polygon points’ orientation. Furthermore, we’ll revise and use some formulas for the area computation. We assume having a basic knowledge of polygons, and we’ll also use basic definitions of linear algebra.

Let’s recall the way the polygon is stored in memory. Assume

is our polygon. It consists of

points. Therefore, we can represent

. So the shape of

. It’s important to note it consists of the same points in a reversed order.

are two different polygons, which look absolutely the same and have equal shapes and areas.

What differs between them is their point orientation. If the points in

are oriented clockwise, then point orientation in

is counterclockwise and vice versa:

We’ll use this information about point orientation further in the tutorial. Moreover, as previously mentioned, the areas of

are numerically equal, but the signs of the areas are different.

There is a simple linear-time algorithm for the 2D polygon area computation. The algorithm introduces a formula for the area. We’ll briefly discuss the key aspects of the polygon area calculation, as well as use this formula in our point orientation algorithm.

The area of a shape can either be positive or negative. If the shape is represented as a list of points, then it depends on the orientation of the points. Let’s briefly remember the formulas for calculating the areas of triangles and polygons.

is defined by 3 points 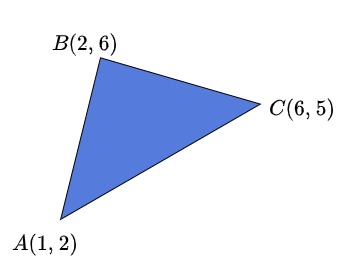 The area of this triangle can be computed with a simple formula from linear algebra:

If we shift our triangle to make point

, the area of the triangle won’t change: 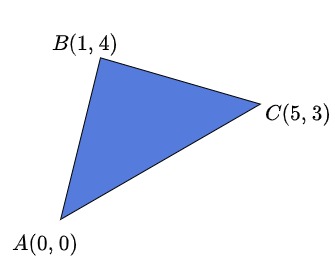 However, the formula of area computation will be a bit simplified:

Now we can calculate the area of a polygon using the formula for the triangle area. The idea of the approach is simple. It uses the decomposition technique. We can decompose the polygon of

triangles. To do this, we choose the arbitrary point

After that, we can compute the areas of

triangles. Assume we have a polygon represented with the set of

. We form a triangle by picking points

. Then we sum up all the areas to get the area of the entire polygon.

The final formula that computes the area of the polygon:

It’s important to remember that the area of the polygon can be either positive or negative. It depends on the chosen point for decomposition and order of the vertices.

. It takes an arbitrary number

as a parameter and returns only three values. If

. We may notice this function gives us information about the sign of the number.

. First, we compute the signed area by the above formula to get the number

, then the points are oriented counterclockwise.

, then the points have a clockwise orientation. We wouldn’t expect the case when

. That would mean the area of the polygon is 0. In that case, it’s probable that the polygon was not correctly defined.

The time complexity of the above algorithm is

is the number of points of the polygon. It takes linear time to compute the area. After that, it takes

time to learn whether the area is positive or not. Thus, the final complexity is

because we only need one variable to store the area.

In this article, we’ve introduced an algorithm, which helps to determine polygon point orientation in linear time. Furthermore, we’ve recalled a simple approach to compute the area of a polygon. There exist several other techniques for determining point orientation; however, all of them are based on this simple idea.