There exist lots of formulas to compute the area of different mathematical shapes. A polygon consists of a finite number of connected straight-line segments. Also, we can represent it as a set of consequential points that form the entire polygon.

In this tutorial, we’ll learn how to calculate the area of an arbitrary 2D polygon. Also, we’ll use some basic operation of linear algebra.

A vector in a 2D space is a geometric object. For points

is a displacement from

. A displacement is both direction and distance:

A 2D-vector is represented as an object

respectively, then the vector is

We may assume the matrix to be a 2D array of numbers. The matrix has

then the matrix is square. Importantly, for square matrices exist a special number, called the determinant.

Importantly, the triangle is a polygon with 3 vertices. Firstly, we’ll show how to compute the area of a triangle. Linear algebra produces simple formulas for the area of a parallelogram and triangle. To compute them, we only have to know their vertices coordinates on a 2D-surface.

So, suppose we have a parallelogram: 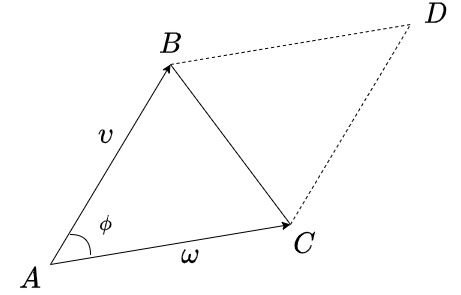 To compute the area of a parallelogram, we can compute:

. Also, we can refer to linear algebra and compute the determinant of a square matrix, consisting of vectors

Similarly, the area of the triangle can be calculated as:

For instance, let’s take the coordinates of a triangle and compute its area: 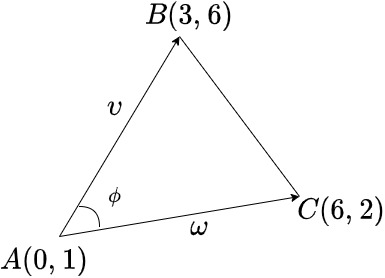 The area is negative as we used vectors

ordered clockwise. If we use them ordered counter-clockwise then the area will be positive:

This formula for area is a very efficient computation. Moreover, we may notice that it involves no roots and no trigonometric functions. There are just two multiplications, five additions, and possibly one division by two.

Similarly, there also exists a method to compute the area of the 2D polygon. Remember, the polygon is called simple when it has no self-intersections. The simple polygon with

vertices can be decomposed to

triangles. Thus, we can compute all the signed areas of triangles of the decomposed polygon and sum up all the areas to get the area of the entire polygon. Importantly, the area of the polygon can be either positive or negative as well. So, it depends on the chosen point for decomposition and order of the vertices.

Let’s now go deeply with an explanation of calculations. Let

be an arbitrary point.

are the vertices of the polygon. We can compute the area as the sum of all areas of triangles

. Importantly, we assume that

to close the polygon.

Remember, the orientation of points of each triangle in decomposed polygon matters. Let’s look at the example of the polygon and point 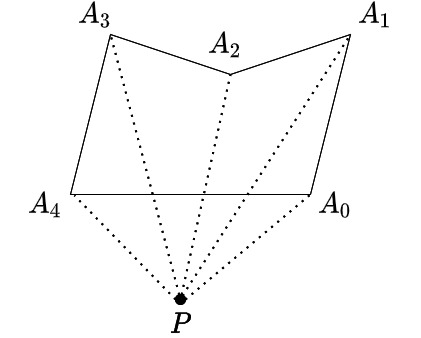 We have to compute the area of five triangles:

As we may notice, the orientation of the first 4 triangles is counter-clockwise. Therefore, the area of these triangles will be positive. But, we see, that we compute the area of extra space, which is not the polygon area. However, triangles

is oriented clockwise. Thus, its area will be negative and will compensate for extra areas.

4.3. Formula to Compute the Polygon Area

To make the final computation formula more explicit, we may choose a specific point

. Assume we have a polygon represented with the set of

. Thus, the formula that computes the area of the polygon:

This is the sum of all triangle areas, that can be formed with each line segment of a polygon. Remember, we have to include all polygon edges, and the last triangle of the sum will be triangle

Finally, let’s prove the above formula. Referring to mathematical analysis, we should know about Green’s Theorem.

be our polygon line segments. Let

be a region, bounded with

is our target region. The goal is to compute its area

are functions, defined on

So, in order to compute the area of polygon

, we need to choose

. The appropriate choice is

is our target polygon area, the formula transforms to

is our polygon line segments

. Also, we assume all line segments are oriented counter-clockwise.

To compute each integral in the sum, we can represent each line segment:

The last thing that we need to do is to substitute the parameterization:

And the final formula, that computes the target polygon area:

6. Example of the Polygon Area Calculation

For instance, let’s take the polygon below and use the above formula to compute its area: 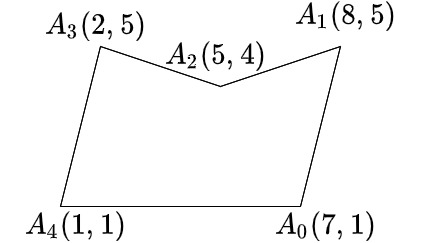 for calculating the areas.

We may notice, that during the calculations areas of

are positive. But, areas of

are negative. This happens, because our target point

. As a result, it compensates for extra computed areas.