HTTP flood attacks are a type of Distributed Denial of Service (DDoS) attack. They target the servers by flooding them with a high volume of HTTP traffic. These attacks are designed to disrupt the normal functioning of the server, thus making it unavailable to legitimate clients.

The attacker initiates the attack by injecting too many HTTP requests into a targeted host. We can achieve this using a script or botnets. Furthermore, these requests may use different HTTP methods like GET and POST. As a result, the targeted website becomes overwhelmed due to the high volume of requests, hence causing it to slow down or crash: 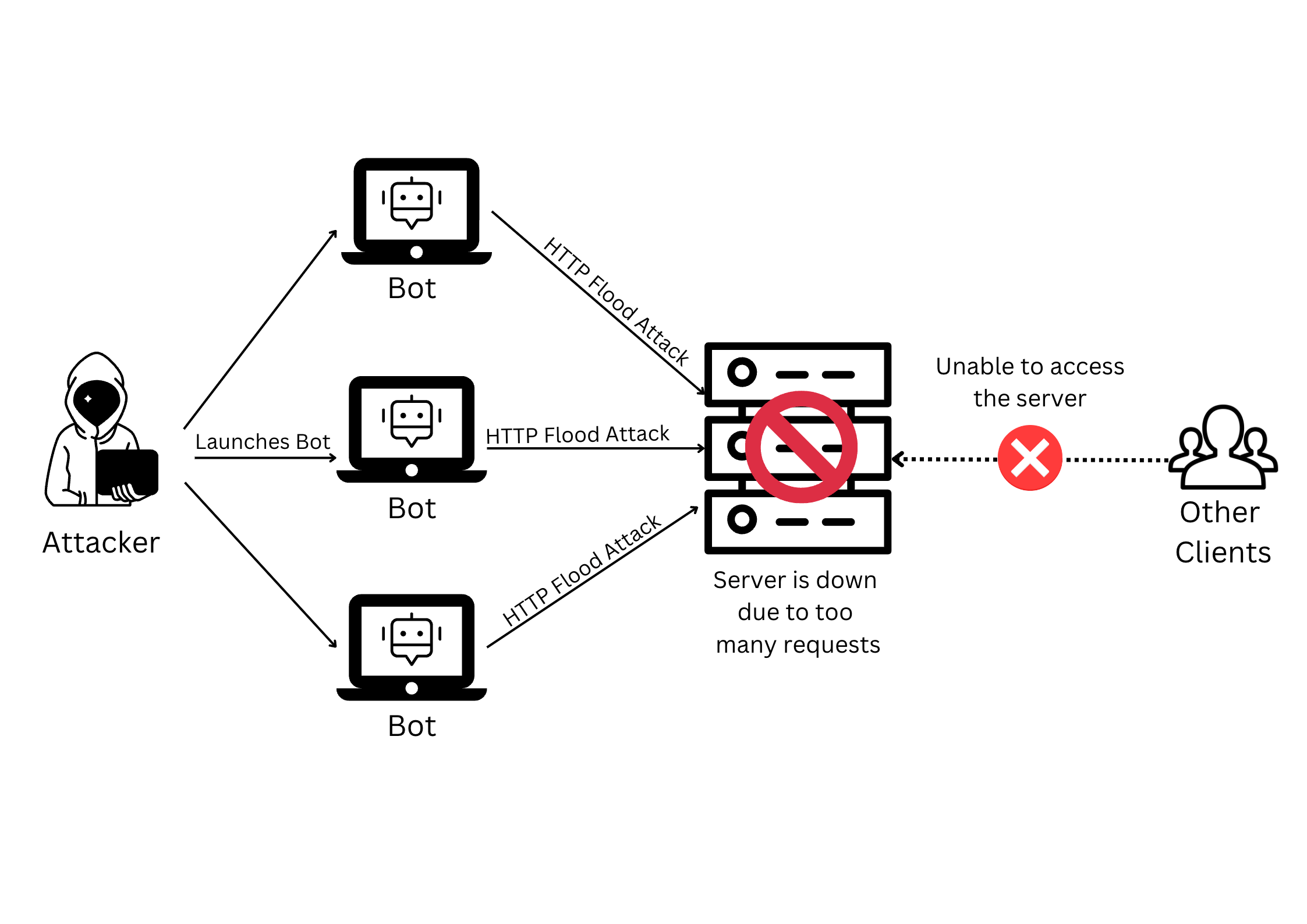 Finally, legitimate users are unable to access the same server, leading to a loss of service availability.

The traffic generated by the attacker can often appear to be legitimate. This makes it challenging to detect HTTP flood attacks.

HTTP flood attack type can vary in terms of the techniques used to generate traffic and disrupt the targeted server. Some common types of HTTP flood attacks include GET, POST, and Slowloris attacks.

Similar to a GET flood, an HTTP POST attack uses POST requests instead. A POST request typically includes data in the body of the request that is sent to the server for processing. This can be more effective as it can potentially consume more server resources.

Slowloris attack keeps the HTTP connections open for as long as possible, using minimal bandwidth. As a result, the attacker prevents the web server from closing the connection and freeing up resources, leading to an overload of the server.

Irrespective of the type, HTTP flood attacks are difficult to detect due to the volume of traffic they generate. Therefore, it is important for web servers to have strong defenses in place to protect against these types of attacks.

There are several strategies to detect and prevent HTTP flood attacks. Implementing rate limits is a powerful approach to controlling flood attacks. Rate limiting involves setting limits on the amount of traffic that can be received from a single source over a certain period of time. This prevents a single device from generating excessive traffic.

We can also use network tools to monitor traffic flow and patterns in the network. These patterns can help us identify unusual activity that may indicate an HTTP flood attack. Additionally, we may configure firewalls to block malicious requests and protect against flood attacks.

Another mitigation strategy is to introduce load balancers. It helps in distributing the incoming traffic across multiple servers. This prevents a single server from becoming overwhelmed during an HTTP flood attack.

By implementing these strategies, servers add an additional layer of defense against flood attacks and minimize the risks and consequences. It’s important to regularly review and update security measures to ensure protection against the latest threats.