Firstly, we’ll define the algorithm and provide an example that explains it.

Secondly, we’ll discuss two approaches to this algorithm. Finally, we’ll show some useful usages of it.

Flood fill is an algorithm that determines the area connected to a given cell in a multi-dimensional array.

Suppose we have a colorful image that can be represented as a 2D array of pixels. Each pixel in this 2D array has a color. Our task is to change the color of some area that has a specific color to a new color.

For simplicity, we’ll consider the neighbors of each cell to be the cells to the top, bottom, left, and right of the cell. In addition, to consider a cell as a part of the connected area, it must have the same color as the initial one.

Let’s check an example for better understanding. Suppose we have the following 2D array: 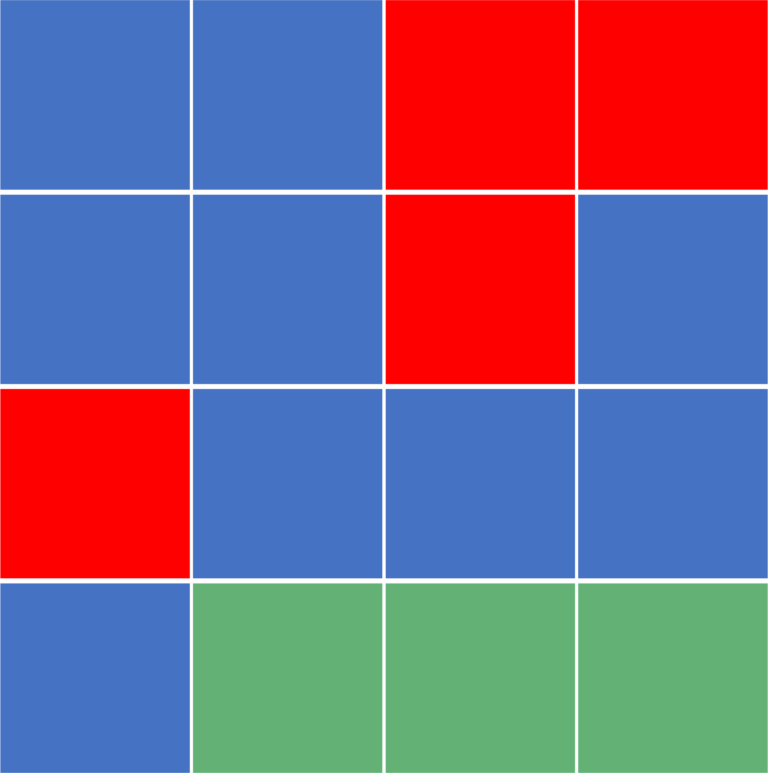 Suppose that we’re given

. As we can see the color of cell

is blue. Therefore, we’ll recolor all its connected cells that have the same color to the 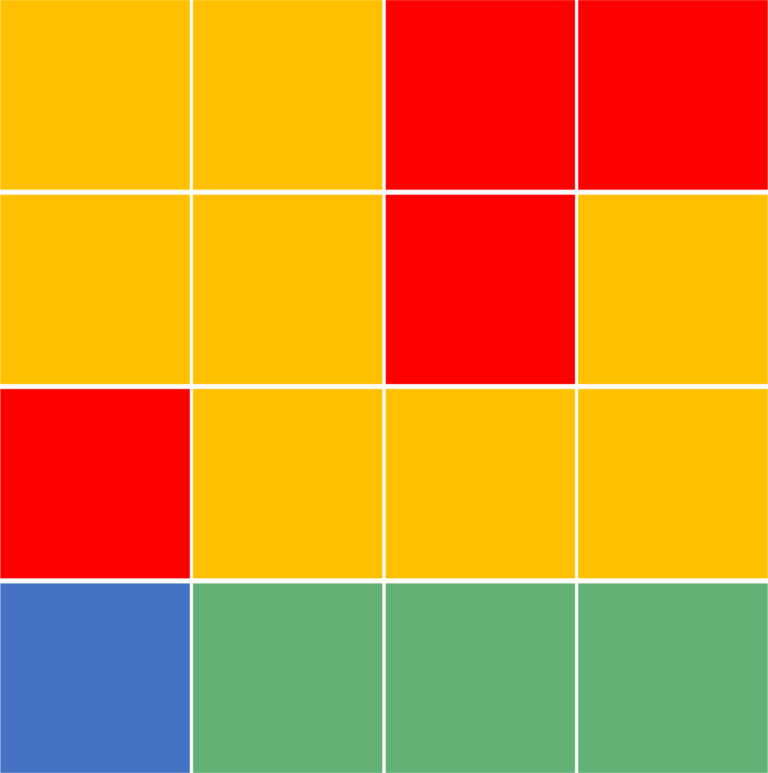 In addition, the bottom left cell still has a blue color at the end. The reason is that it’s not a part of the connected area that contains the initial cell.

and recolor them. To do that, we’ll divide our implementation into three steps.

First, we’ll create a function that helps us decide whether a certain cell is valid to move to, or not. Secondly, we’ll implement the BFS approach. Finally, we’ll see how to improve the implementation to make it cleaner and shorter.

function will tell us whether the cell we want to move to is valid or not. The

is valid if the following conditions are true:

Take a look at the first implementation of the BFS approach:

Initially, we declare an empty queue to store the cells during BFS traversal. Also, we declare

variable which represents the initial color of the source cell.

Next, we perform multiple steps as long as the queue isn’t empty. In each step, we take the

cell that is positioned in the front of the queue, remove it from the queue, change its color to the

and mark it as a visited cell. After that, we add her adjacent valid neighbor cells to the queue.

loop is finished, all the area of the initial cell will be marked as visited and has the new color.

As we can see, our implementation is messy a little bit. So, to make it cleaner, we’ll declare two transition arrays that will help us move to all adjacent cells with a single line of code.

The transition arrays here will give us the offset needed from the current cell to move to the adjacent cells. For example, transition

will give us the cell that lies on the left of the current cell.

In addition, we can change the color of a cell when we retrieve it from the queue, rather than changing each cell before adding it to the queue.

The complexity of this approach is the same as the BFS complexity, which is

is the number of rows in our 2D array and

is the number of columns. The reason behind this complexity is that it’s similar to the original BFS complexity which is

is the number of edges.

In our case, the number of vertices is

, and the number of edges is

), because each cell has four adjacent cells.

In the DFS (Depth-First Search) algorithm, we’ll apply the same concepts from the previous BFS Approach to traverse to the four adjacent cells of the

and recolor them. In addition, we’ll use the

function defined in section 3.1 and the enhanced version of visiting the neighbors using the transition array.

Initially, we declare the same two transition arrays from the previous approach.

Next, each time we enter the

Then, we iterate over the four adjacent neighboring cells. For each one, we’ll check whether it’s valid to move to. If so, we’ll call the

function recursively on that cell.

The complexity of this approach is the same as the DFS complexity, which is

is the number of rows in our 2D array and

is the number of columns. The reason behind this complexity is the same as the one described in section 3.3.

Let’s discuss some cases where we might need to use the flood fill algorithm:

In this article, we presented the Flood Fill algorithm. We explained the general idea and discussed two approaches to solving the problem. Finally, we provided a fair usage of the algorithm in real-life problems.