In this tutorial, we’ll talk about a distributed system term called Consensus. Mainly, we’ll introduce Consensus and walk through the different ways of achieving it. Then, we’ll discuss its main types, mention its applications and talk about the possibilities and limitations of Consensus.

The Consensus term was first introduced by Leslie Lamport and Barbara Liskov in the 1970s. Generally, in distributed systems, in order to make decisions, it is crucial to ensure that every individual in the team is on the exact same track. Thus, in computer science, Consensus is a protocol about the process of coming to a complete agreement across several parties. Moreover, Consensus is mostly employed in the context of blockchain technology to verify transactions and uphold the reliability of the distributed ledger.

3. How to Achieve Consensus?

In general, reaching a Consensus in a group or network necessitates effective communication, attentive listening, and a readiness to take into account the opinions of others. In order for a group to reach a conclusion that is fair and reflective, a few crucial phases should be included.

At first, it is crucial to describe the issue that has to be resolved clearly, so that everyone in the group strives towards the same objective. Secondly, debates, voting, or other procedures should take place in order for each individual in the group to have an equal chance to express their thoughts and offer solutions. So, after taking into account each and every viewpoint and recommendation, a choice must be made either through a majority vote or through alternative consensus-building processes like discussions or negotiations.

Note that reaching an agreement doesn’t imply that each member of the group will approve the final choice; but that a decision has been made that is supported by the majority of the group.

In a blockchain network, consensus may be reached via a variety of methods. The most common types of Consensus are Proof of Work (PoW), Proof of Stake (PoS), and Delegated Proof of Stake (DPoS). Therefore, each of these techniques has a unique method of reaching consensus, such as demanding nodes to handle complex mathematical problems (PoW), enabling nodes to “stake” their own coins to check and verify (PoS), or letting nodes choose others for the validation process on their favor (DPoS). One should consider the network’s demands and objectives to choose an algorithm.

The algorithm that is employed by the Bitcoin blockchain is PoW. This technique includes a mini-competition between the nodes. In order to verify transactions and add one to the distributed ledger, each node tries to find solutions for complicated mathematical challenges. Whoever determines the solution to the problem is rewarded with a block and is given the option of adding the block to the ledger.

PoS is another well-known Consensus process that is built on the concept of “staking” coins. In a PoS system, each node must invest a certain amount of their personal coins to participate in the transaction validation process. Therefore the higher the investment, the greater the chance of being chosen to verify a transaction and get a block reward.

DPoS is an alternative technique of PoS that achieves a more democratic and decentralized agreement. During this method, nodes choose other nodes to represent them with an election system. The elected nodes are responsible for the community and perform the validation of the transactions for them.

There are numerous applications of consensus algorithms in blockchain technology, each using a unique way of achieving agreement.

The Bitcoin blockchain, which employs a Proof of Work (PoW) consensus method, is one of the best-known examples. Through a procedure called mining, a fresh block of transactions is added to the ledger every ten minutes. A miner competes with other miners to solve a challenging math problem in order to add a block reward to the ledger.

Another application of Consensus in the blockchain is the Ethereum network. The transactions in this protocol are verified using a mix of mining (PoW) and staking (PoS).

Blockchain technologies use a wide range of Consensus algorithms because they contribute to the efficiency, security, and decentralization of the network. Generally, Consensus reduces the necessity for a globally authorized node to approve transactions. Also, by using methods that enable quicker and more effective transaction validation, efficiency is increased. Another advantage is that Consensus enhances the security of the system as it uses sophisticated cryptographic techniques for the majority network’s agreement: 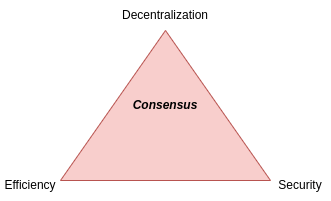 On the other hand, Consensus comes with a major obstacle, that of scalability. The time and computational resources needed to attain consensus can grow as the number of transactions on a network rises, which can result in longer and slower transaction processing times. Furthermore, in decentralized and democratic systems, it may be more challenging to organize efforts to reach consensus than in a centralized one.

Despite the challenge of Scalability, the use of Consensus offers many advantages that include increased decentralization, security, and efficiency. It has proven to be an essential component of decision-making and maintaining the integrity and security of a blockchain network.

In this article, we walked through the concept of Consensus. In particular, we introduced Consensus and covered the basic ways of achieving it. Also, we saw the main algorithms and discussed the benefits and limitations of Consensus in Distributed Systems, along with the most well-known uses of it.