In this tutorial, we’ll discuss a self-balancing tree data structure: B-tree. We’ll present the properties and various operations of the B-tree.

B-tree is a tree data structure. In this tree structure, data is stored in the form of nodes and leaves. B-tree is known as a self-balanced sorted search tree. It’s a more complex and updated version of the binary search tree (BST) with additional tree properties.

Unlike a binary search tree, a B-tree can have multiple keys in a node. The number of keys and the number of children for any node depends on the order of the B-tree. Keys are the values that are stored at any node. Let’s take a look at an example of B-tree: 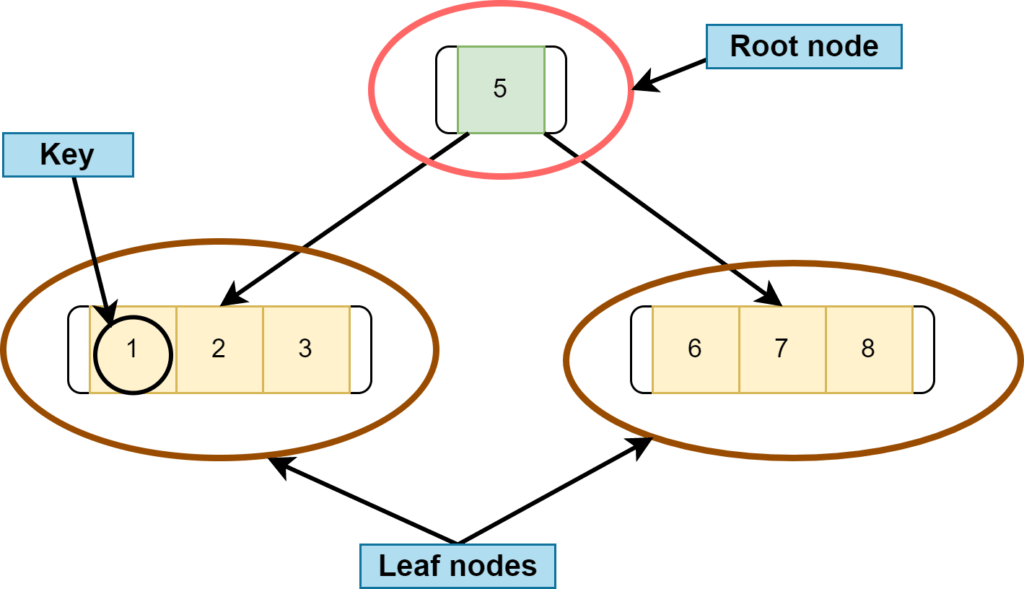 All the leaf nodes must be at the same level. Leaf node means a node that doesn’t have any child nodes.

Suppose the order of a B-tree is

. It means every node can have a maximum of

children. Therefore, every node can have maximum

keys except the root node.

Let’s take a B-tree of order

. According to the properties of the B-tree, any node can have a maximum of

keys in this case. Furthermore, any node can have minimum

Like any other tree data structure, three primary operations can be performed on a B-tree: searching, insertion, and deletion. Let’s discuss each operation one by one.

The structure of the B-tree is similar to the binary search tree with some added properties. Hence, the searching operation in a B-tree works the same as a BST. Initially, we start searching from a root node.

We either go to the left or right subtree from the root node, depending on the key value of the node we want to search. On top of this, in a B-tree, we have several decisions as there can be more than two branches for a node.

The searching time complexity of a B-tree in the best, as well as the worst-case, is

denotes the total number of elements in a B-tree.

Insertion is the operation in which we insert or add elements in a B-tree. During this process, we need to keep some points in mind. We can’t insert any element at the root node of a B-tree. We have to start inserting elements from the leaf node.

Additionally, while inserting a node in a B-tree, we must check the maximum number of keys at any node and add elements in ascending order.

Let’s take the example of inserting some nodes in an empty B-tree. Here, we want to insert

nodes in a empty B-tree:

. Let’s assume the order of the B-tree is

. Hence, the maximum number of children a node can contain is

. Additionally, the maximum and the minimum number of keys for a node, in this case, would be

While inserting any element, we must remember that we can only insert values in ascending order. Moreover, we always insert elements at the leaf node so that the B-tree always grows in the upward direction.

Next, we want to inset node

. But there’s no space for inserting new elements in that leaf node as the maximum key a node can contain is

Now we want to insert the next element, which is

. The key of the incoming node is greater than

. Hence, we’ll add this node to the right of

Let’s insert the next node with key

. We first check the root, and as

on the right side of

. But again there’s not enough space. Therefore, we split it and move the median of

, to the upper node:

Similarly, we insert our next node with key

Finally, let’s add all the remaining nodes one by one following the properties of the B-tree:

Let’s take an example of deletion from the B-tree: Here, we’re taking a B-tree of order

. The maximum number of children a node can contain is

. Additionally, the maximum and the minimum number of keys for a node, in this case, would be

If the target key’s leaf node contains more than the minimum required keys, we don’t have to worry about anything. We need to delete the target key. After deletion, it’ll still be a complete B-tree.

If the target key’s leaf node contains only the minimum number of keys, we can’t simply delete the key. Because if we do so,  it’ll violate the condition of the B-tree. In such a case, borrow the key from the immediate left node if that node has more than the minimum required keys.

We’ll transfer the maximum value of the left node to its parent node. After that, the key with greater value will be transferred to the borrower node. Moreover, we can remove the target key from the node. Let’s say we want to remove a node with key 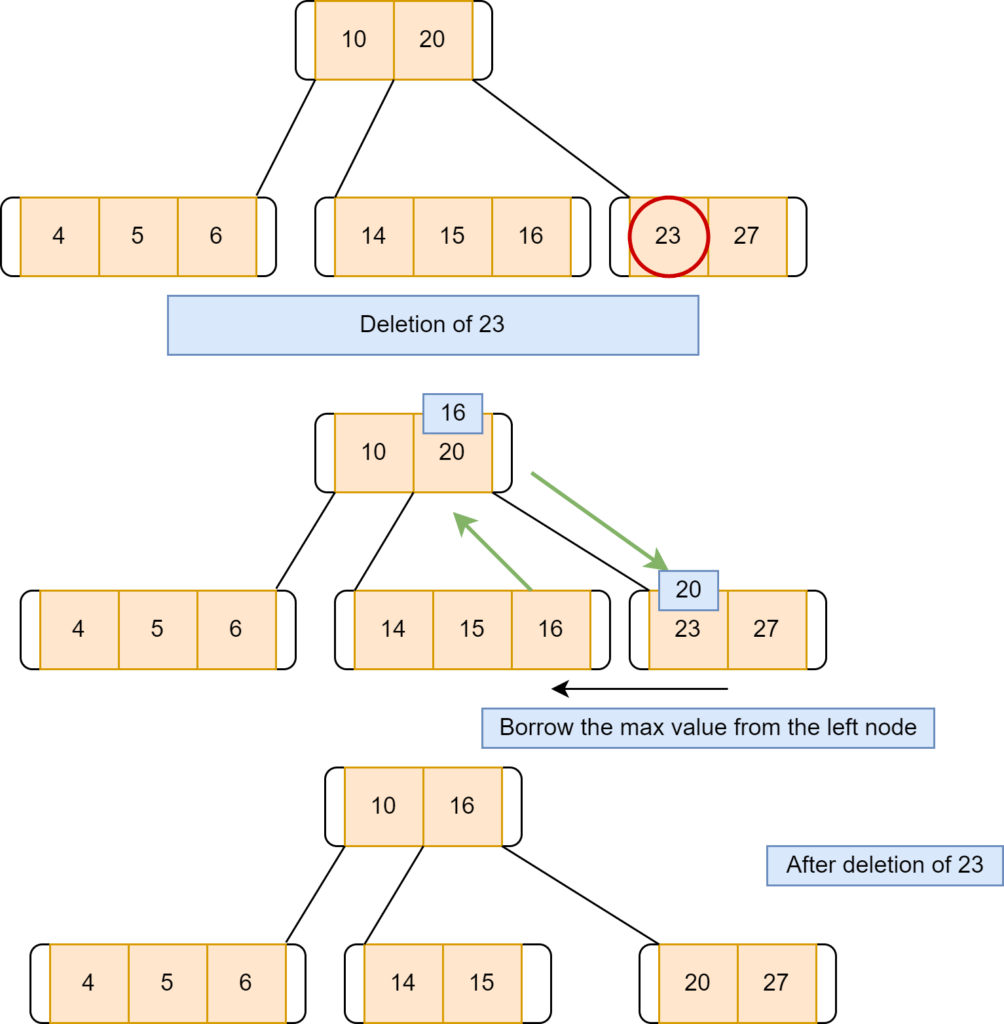 Another possible way is to borrow the key from the immediate right node if that node has more than the minimum required keys. We’ll transfer the minimum value of the right node to its parent node. The key value, which is smaller, will be transferred to the borrower node. After that, we can remove the target key from the node. Let’s say we want to remove a node with key 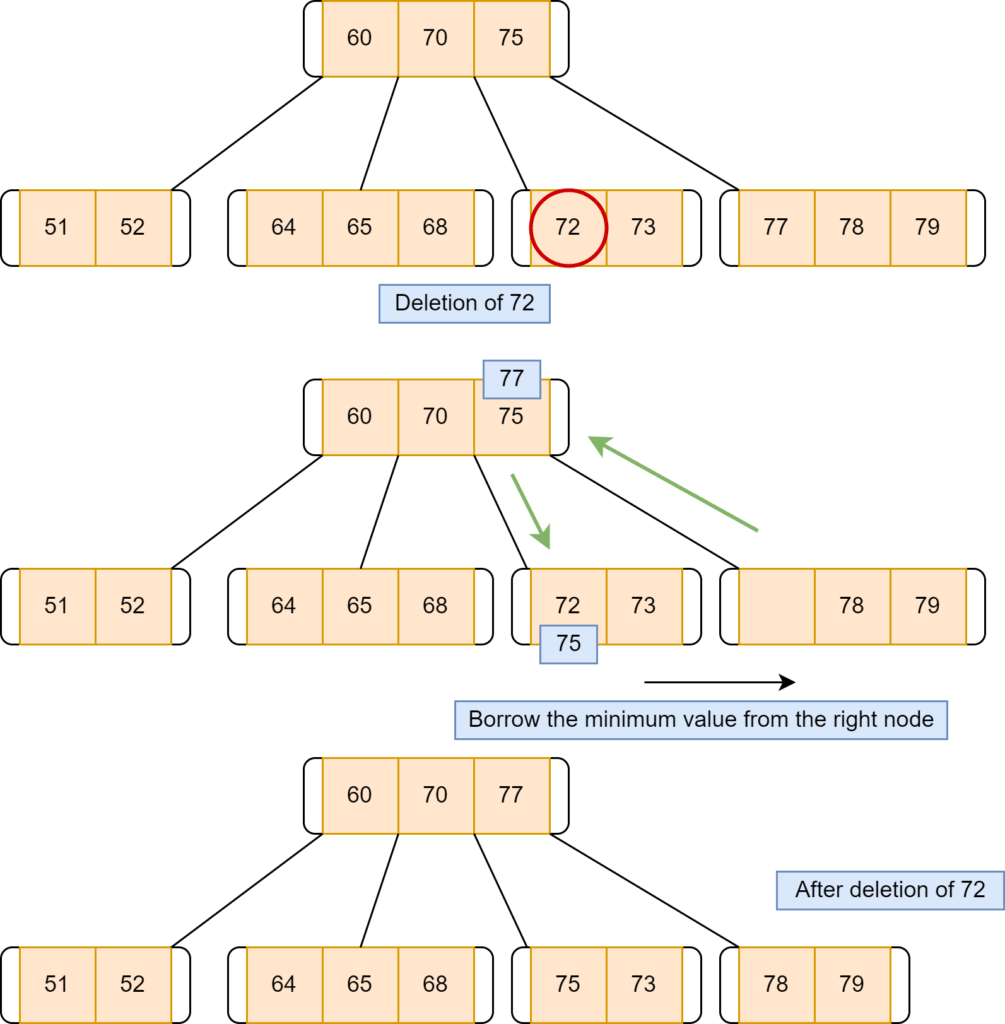 Now let’s discuss the scenario when neither the left sibling nor the right sibling of the target key’s node has more than the minimum required keys. In such a case, we need to merge two nodes. Out of two nodes, one node should contain our target node’s key. While merging, we also need to consider the parent nodes as well.

Suppose we want to delete a node with a key of

. Its sibling nodes don’t contain more than the minimum number of keys. Here the first step is merging the nodes. In this example, we have merged the left node of the target key’s node. After merging the nodes, we delete our target node: 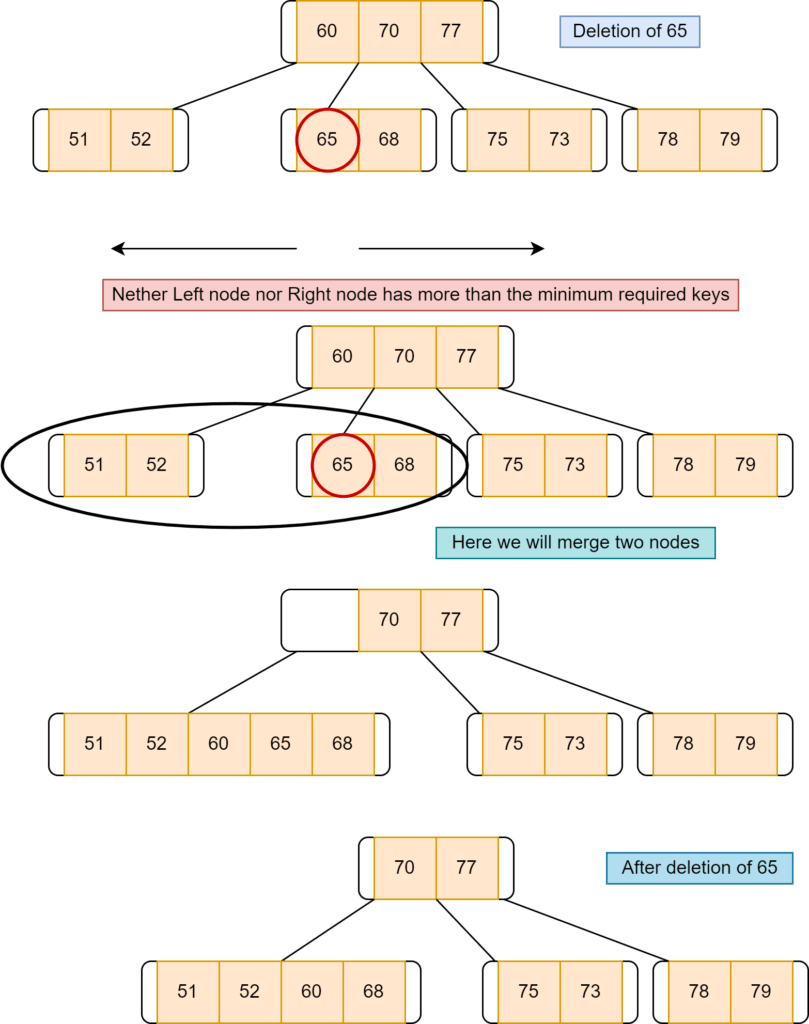 Now let’s discuss the case when the target key is at an internal node: 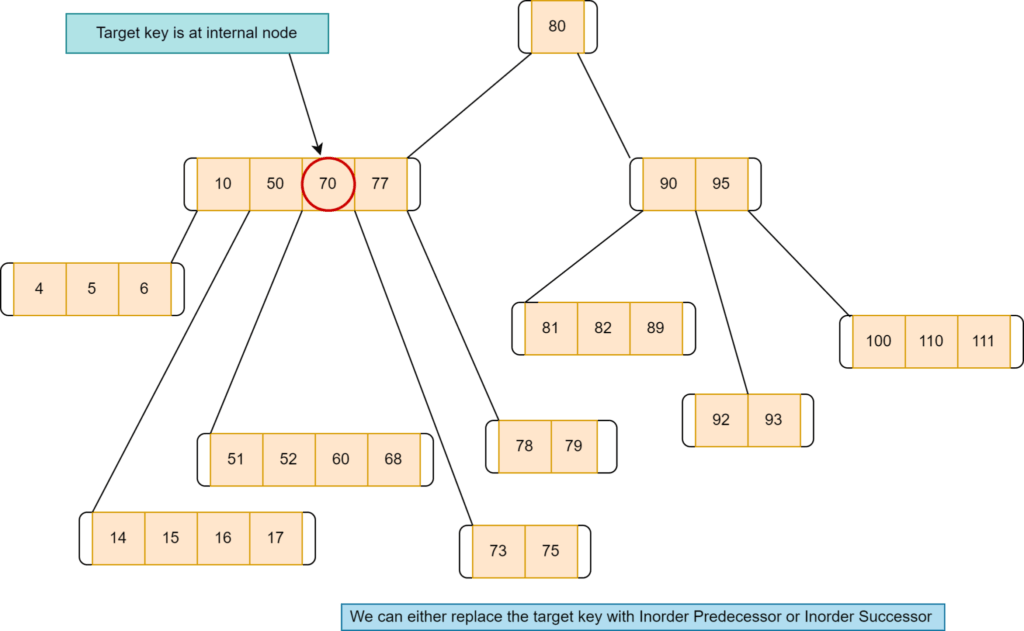 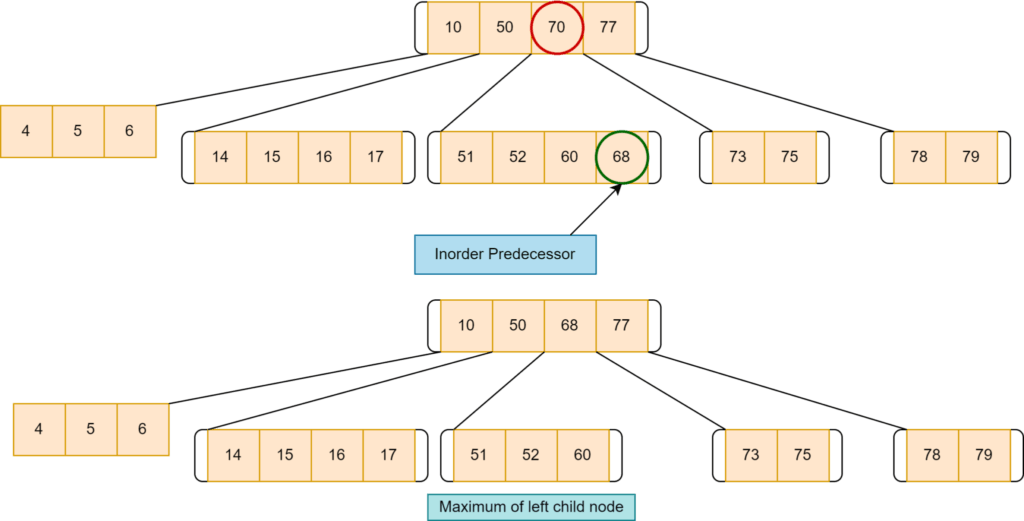 If the left doesn’t have more than the minimum required keys, we replace the target key with its inorder successor. Here, we’ll take the right node of the target key, select the lowest value key and replace that with the target key: 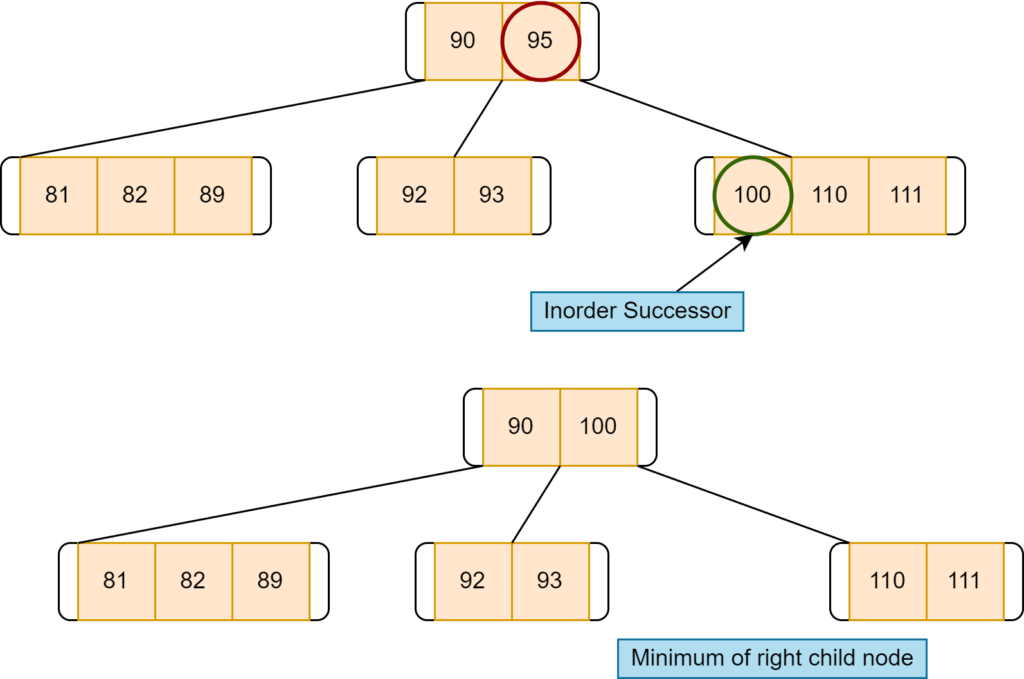 If the target key’s inorder successor node and inorder predecessor node don’t have more than the minimum number of the required key, we need to merge two adjacent nodes. For example, deletion of

B-Tree is one the most used data structure for storing a large amount of data. In this tutorial, we discussed B-tree in detail. We presented the properties and operations with examples.