In this tutorial, we’ll explain how to project a three-dimensional point onto a (two-dimensional) plane with its coordinate system.

Let’s say we have a point with coordinates

and a plane whose equation is:

is any point in the plane, and

are its parameters. Geometrically,

is the vector normal to the plane. It doesn’t have to be unitary but needs to be non-zero. Parameter

-coordinate of the plane’s intersection with the 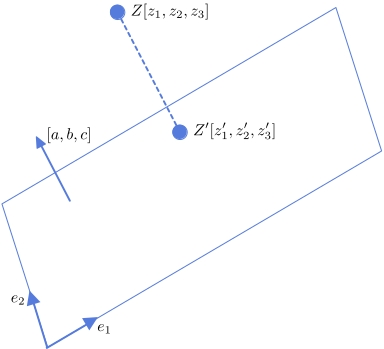 The plane has a two-dimensional coordinate system of its own, defined by two base unit vectors

So, our goal is to find the coordinates of the

onto the plane in the coordinate system defined by

3. How to Project a Point

onto the plane and finding the coordinates in the original 3D system. Since the projection

belongs to the plane, its coordinates fit Equation (1):

is perpendicular to the plane, so it’s parallel to the plane’s normal vector. The line’s vector is

. So, the following should hold:

for some real number

, and plugging the obtained expressions into Equation (2), we get:

If the normal vector is also a unit vector (i.e., its length is 1), the denominator is also one since it denotes the vector’s squared length.

in Equations (2), we can easily calculate the coordinates:

and let the plane’s equation be:

3.2. An Alternative Parameterization of the Plane

The plane can be specified by the normal vector

in it. For an arbitrary point

in the plane, it must hold that the vector

, we can proceed as in the sections above.

We get the new coordinates of

by projecting it onto the unit vectors 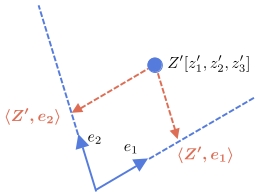 To do that, it’s sufficient to find the dot products

. If we treat all the vectors (including points) as column vectors, we can get the new coordinates of

in the new coordinate system are

In this article, we showed how to project a point onto a plane and find its coordinates in the plane’s coordinate system.