In this tutorial, we'll discuss some of the design principles and patterns that have been established over time to build highly concurrent applications.

However, it's worthwhile to note that designing a concurrent application is a wide and complex topic, and hence no tutorial can claim to be exhaustive in its treatment. What we'll cover here are some of the popular tricks often employed!

Before we proceed any further, let's spend some time understanding the basics. To begin with, we must clarify our understanding of what do we call a concurrent program. We refer to a program being concurrent if multiple computations are happening at the same time.

2.1. How to Create Concurrent Modules?

It's important to understand how can we create concurrent modules. There are numerous options, but we'll focus on two popular choices here:

2.2. How Do Concurrent Modules Interact?

It's quite ideal if concurrent modules don't have to communicate, but that's often not the case. This gives rise to two models of concurrent programming:

2.3. How Do Concurrent Modules Execute?

It's been a while since Moore's Law hit a wall with respect to the clock speed of the processor. Instead, since we must grow, we've started to pack multiple processors onto the same chip, often called multicore processors. But still, it's not common to hear about processors that have more than 32 cores.

Now, we know that a single core can execute only one thread, or set of instructions, at a time. However, the number of processes and threads can be in hundreds and thousands, respectively. So, how does it really work? This is where the operating system simulates concurrency for us. The operating system achieves this by time-slicing — which effectively means that the processor switches between threads frequently, unpredictably, and non-deterministically.

As we go about discussing principles and patterns to design a concurrent application, it would be wise to first understand what the typical problems are.

For a very large part, our experience with concurrent programming involves using native threads with shared memory. Hence, we will focus on some of the common problems that emanate from it:

Now, that we understand the basics of concurrent programming and the common problems therein, it's time to understand some of the common patterns for avoiding these problems. We must reiterate that concurrent programming is a difficult task that requires a lot of experience. Hence, following some of the established patterns can make the task easier.

The first design we will discuss with respect to concurrent programming is called the Actor Model. This is a mathematical model of concurrent computation that basically treats everything as an actor. Actors can pass messages to each other and, in response to a message, can make local decisions. This was first proposed by Carl Hewitt and has inspired a number of programming languages.

Scala's primary construct for concurrent programming is actors. Actors are normal objects in Scala that we can create by instantiating the Actor class. Furthermore, the Scala Actors library provides many useful actor operations:

In the example above, a call to the receive method inside an infinite loop suspends the actor until a message arrives. Upon arrival, the message is removed from the actor's mailbox, and the necessary actions are taken. 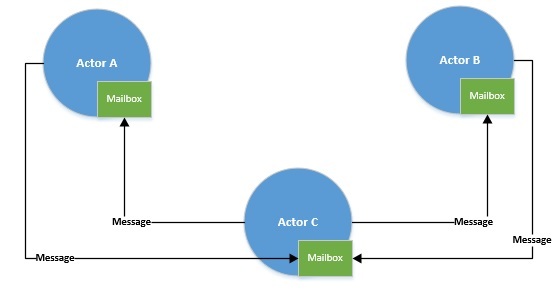 The actor model eliminates one of the fundamental problems with concurrent programming — shared memory. Actors communicate through messages, and each actor processes messages from its exclusive mailboxes sequentially. However, we execute actors over a thread pool. And we've seen that native threads can be heavyweight and, hence, limited in number.

There are, of course, other patterns that can help us here — we'll cover those later!

Basically, the event loop is nothing but an event dispatcher! The event loop itself can be running on just a single native thread. So, what really transpires in an event loop? Let's look at the pseudo-code of a really simple event loop for an example:

Basically, all our event loop is doing is to continuously look for events and, when events are found, process them. The approach is really simple, but it reaps the benefit of an event-driven design.

Building concurrent applications using this design gives more control to the application. Also, it eliminates some of the typical problems of the multi-threaded applications — for example, deadlock. 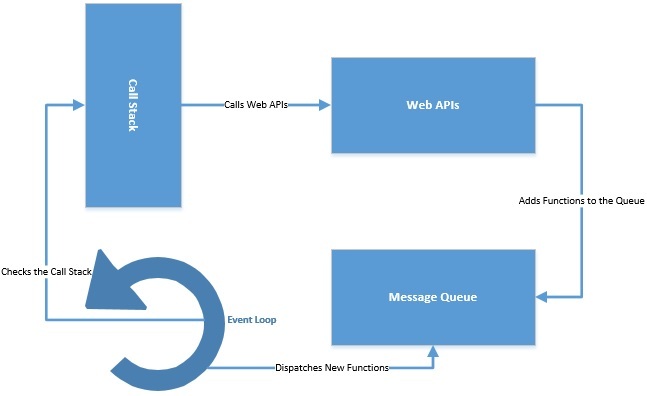 The event loop itself can be running off a single thread, but the web APIs provide separate threads.

In non-blocking algorithms, suspension of one thread does not lead to suspension of other threads. We've seen that we can only have a limited number of native threads in our application. Now, an algorithm that blocks on a thread obviously brings down the throughput significantly and prevents us from building highly concurrent applications.

Non-blocking algorithms invariably make use of the compare-and-swap atomic primitive that is provided by the underlying hardware. This means that the hardware will compare the contents of a memory location with a given value, and only if they are the same will it update the value to a new given value. This may look simple, but it effectively provides us an atomic operation that otherwise would require synchronization.

This means that we have to write new data structures and libraries that make use of this atomic operation. This has given us a huge set of wait-free and lock-free implementations in several languages. Java has several non-blocking data structures like AtomicBoolean, AtomicInteger, AtomicLong, and AtomicReference.

Consider an application where multiple threads are trying to access the same code:

Clearly, the code above is not thread-safe, and its behavior in a multi-threaded environment can be unpredictable. Our options here are either to synchronize this piece of code with a lock or use an atomic operation:

As we can see, using a non-blocking data structure like AtomicBoolean helps us write thread-safe code without indulging in the drawbacks of locks!

We've seen that there are multiple ways we can construct a concurrent module. While the programming language does make a difference, it's mostly how the underlying operating system supports the concept. However, as thread-based concurrency supported by native threads are hitting new walls with respect to scalability, we always need new options.

Implementing some of the design practices we discussed in the last section do prove to be effective. However, we must keep in mind that it does complicate programming as such. What we truly need is something that provides the power of thread-based concurrency without the undesirable effects it brings.

One solution available to us is green threads. Green threads are threads that are scheduled by the runtime library instead of being scheduled natively by the underlying operating system. While this doesn't get rid of all the problems in thread-based concurrency, it certainly can give us better performance in some cases.

Most importantly, goroutines are multiplexed with a lesser number of native threads. Moreover, goroutines communicate with each other using channels, thereby avoiding access to shared memory. We get pretty much everything we need, and guess what — without doing anything!

In Erlang, each thread of execution is called a process. But, it's not quite like the process we've discussed so far! Erlang processes are light-weight with a small memory footprint and are fast to create and dispose of with low scheduling overhead.

Under the hood, Erlang processes are nothing but functions that the runtime handles scheduling for. Moreover, Erlang processes don't share any data, and they communicate with each other by message passing. This is the reason why we call these “processes” in the first place!

The story of concurrency with Java has been a continuous evolution. Java did have support for green threads, at least for Solaris operating systems, to begin with. However, this was discontinued due to hurdles beyond the scope of this tutorial.

Since then, concurrency in Java is all about native threads and how to work with them smartly! But for obvious reasons, we may soon have a new concurrency abstraction in Java, called fiber. Project Loom proposes to introduce continuations together with fibers, which may change the way we write concurrent applications in Java!

Moreover, it's worth noting that a combination of design patterns discussed in the last section, together with the programming language support for a green-thread-like abstraction, can be extremely powerful when designing highly concurrent applications.

A real-world application often has multiple components interacting with each other over the wire. We typically access it over the internet, and it consists of multiple services like proxy service, gateway, web service, database, directory service, and file systems.

How do we ensure high concurrency in such situations? Let's explore some of these layers and the options we have for building a highly concurrent application.

As we've seen in the previous section, the key to building high concurrency applications is to use some of the design concepts discussed there. We need to pick the right software for the job — those that already incorporate some of these practices.

The web is typically the first layer where user requests arrive, and provisioning for high concurrency is inevitable here. Let's see what are some of the options:

While designing an application, there are several tools to help us build for high concurrency. Let's examine a few of these libraries and frameworks that are available to us:

Finally, no application is complete without its data, and data comes from persistent storage. When we discuss high concurrency with respect to databases, most of the focus remains on the NoSQL family. This is primarily owing to linear scalability that NoSQL databases can offer but is hard to achieve in relational variants. Let's look at two popular tools for the data layer:

Well, no web application in the modern world that aims for high concurrency can afford to hit the database every time. That leaves us to choose a cache — preferably an in-memory cache that can support our highly concurrent applications:

Of course, we've barely scratched the surface of what is available to us in our pursuit to build a highly concurrent application. It's important to note that, more than available software, our requirement should guide us to create an appropriate design. Some of these options may be suitable, while others may not be appropriate.

And, let's not forget that there are many more options available that may be better suited for our requirements.

Finally, we went through some of the frameworks, libraries, and software available to us for building a highly-concurrent, end-to-end application.