In this article, we will be highlighting some of the important rules featured in code analysis tools like FindBugs, PMD and CheckStyle.

2.1. What Is Cyclomatic Complexity?

Code complexity is important, yet difficult metric to measure. PMD offers a solid set of rules under its Code Size Rules section, these rules are designed to detect violation regarding methods size and structure complexity.

CheckStyle is known for its ability to analyse code against coding standards, and formatting rules. However, it can also detect problems in classes/methods design by calculating some complexity metrics.

One of the most relevant complexity measurement featured in both tools is the CC (Cyclomatic Complexity).

CC value can be calculated by measuring the number of independent execution paths of a program.

For instance, the following method will yield a cyclomatic complexity of 3:

CC takes into account the nesting of conditional statements and multi-part boolean expressions.

Generally speaking, a code with a value higher than 11 in terms of CC, is considered very complex, and difficult de test and maintain.

Some common values used by static analysis tools are shown below:

The complexity level also affects the testability of the code, the higher the CC, the higher the difficulty to implement pertinent tests. In fact, the cyclomatic complexity value shows exactly the number of test cases needed to achieve a 100% branches coverage score.

The flow graph associated with the callInsurance() method is: 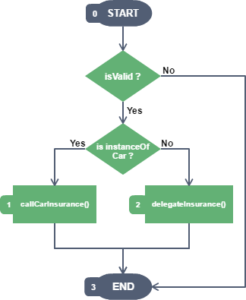 The possible execution paths are:

2.2. How to Reduce Cyclomatic Complexity ?

In order to write substantially less complex code, developers may tend to use different approaches, depending on the situation:

You can also consider following principles and patterns regarding code size and complexity, e.g. the KISS (Keep It Simple and Stupid) principle, and DRY (Don't Repeat Yourself).

Defects related to exceptions might be usual, but some of them are hugely underestimated and should be corrected to avoid critical dysfunctioning in production code.

PMD and FindBugs offer both a handful set of rules regarding exceptions. Here's our pick of what may be considered critical in a Java program when handling exceptions.

3.1. Do Not Throw Exception in Finally

As you may already know, the finally{} block in Java is generally used for closing files and releasing resources, using it for other purposes might be considered as a code smell.

A typical error-prone routine is throwing an exception inside the finally{} block:

This method is supposed to throw a NullPointerException, but surprisingly it throws an IOException, which may mislead the calling method to handle the wrong exception.

3.2. Returning in the finally Block

For example, the following code runs with no errors whatsoever:

A NullPointerException was not caught, yet, still discarded by the return statement in the finally block.

3.3. Failing to Close Stream on Exception

Closing streams is one of the main reasons why we use a finally block, but it's not a trivial task as it seems to be.

The following code tries to close two streams in a finally block:

A quick fix would be to use a separate try/catch block to close the second stream:

If you want a nice way to avoid consecutive try/catch blocks, check the IOUtils.closeQuiety method from Apache commons, it makes it simple to handle streams closing without throwing an IOException.

Whenever you implement the compareTo() method, don't forget to do the same with the equals() method, otherwise, the results returned by this code may be confusing:

To clear confusions, it is recommended to make sure that Object.equals() is never called when implementing Comparable, instead, you should try to override it with something like this:

NullPointerException (NPE) is considered the most encountered Exception in Java programming, and FindBugs complains about Null PointeD dereference to avoid throwing it.

Here's the most basic example of throwing an NPE:

The easiest way to avoid NPEs is to perform a null check:

So here's some technics used to avoid NPEs without null checks:

In this article, we have done an overall look on some of the critical defects detected by static analysis tools, with basic guidelines to address appropriately the detected issues.

You can browse the full set of rules for each one of them by visiting the following links: FindBugs, PMD.