Data distribution and data modeling in the Cassandra NoSQL database are different from those in a traditional relational database.

In this article, we'll learn how a partition key, composite key, and clustering key form a primary key. We'll also see how they differ. As a result, we'll touch upon the data distribution architecture and data modeling topics in Cassandra.

Learn how to build a dashboard using DataStax Astra, a database-as-a-service powered by Apache Cassandra and Stargate APIs.
Read more →

Learn how to display events on an interactive map, based on data stored in an Astra database.
Read more →

In Cassandra, the data is distributed across a cluster. Additionally, a cluster may consist of a ring of nodes arranged in racks installed in data centers across geographical regions.

At a more granular level, virtual nodes known as vnodes assign the data ownership to a physical machine. Vnodes make it possible to allow each node to own multiple small partition ranges by using a technique called consistent hashing to distribute the data.

A partitioner is a function that hashes the partition key to generate a token. This token value represents a row and is used to identify the partition range it belongs to in a node.

However, a Cassandra client sees the cluster as a unified whole database and communicates with it using a Cassandra driver library.

Generally, data modeling is a process of analyzing the application requirements, identifying the entities and their relationships, organizing the data, and so on. In relational data modeling, the queries are often an afterthought in the whole data modeling process.

However, in Cassandra, the data access queries drive the data modeling. The queries are, in turn, driven by the application workflows.

Additionally, there are no table-joins in the Cassandra data models, which implies that all desired data in a query must come from a single table. As a result, the data in a table is in a denormalized format.

The way primary keys work in Cassandra is an important concept to grasp.

Apart from making data unique, the partition key component of a primary key plays an additional significant role in the placement of the data. As a result, it improves the performance of reads and writes of data spread across multiple nodes in a cluster.

Now, let's look at each of these components of a primary key.

The primary goal of a partition key is to distribute the data evenly across a cluster and query the data efficiently.

A partition key is for data placement apart from uniquely identifying the data and is always the first value in the primary key definition.

Here are some sample data in the above table:

As we learned earlier, Cassandra uses a consistent hashing technique to generate the hash value of the partition key (app_name) and assign the row data to a partition range inside a node. 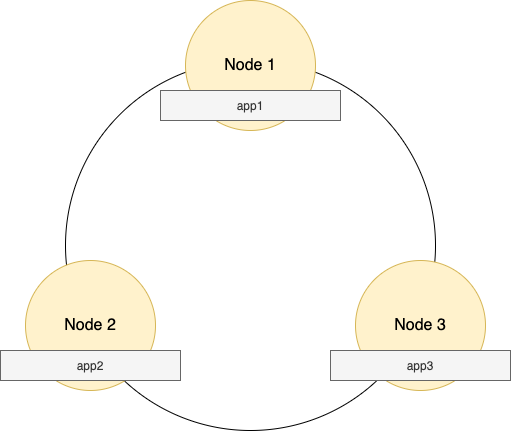 The above diagram is a possible scenario where the hash values of app1, app2, and app3 resulted in each row being stored in three different nodes — Node1, Node2, and Node3, respectively.

A data fetch query without a partition key in the where clause results in an inefficient full cluster scan.

On the other hand, with a partition key in where clause, Cassandra uses the consistent hashing technique to identify the exact node and the exact partition range within a node in the cluster. As a result, the fetch data query is fast and efficient:

Here again, the goal of the composite partition key is for the data placement, in addition to uniquely identifying the data. As a result, the storage and retrieval of data become efficient.

Here's an example of the table definition that combines the app_name and env columns to form a composite partition key:

If we drop the inner parenthesis and have only a single parenthesis, then the app_name becomes the partition key, and env becomes the clustering key component.

Here's the sample data for the above table:

Let's look at the possible data distribution of the above sample data. Please note: Cassandra generates the hash value for the app_name and env column combination: 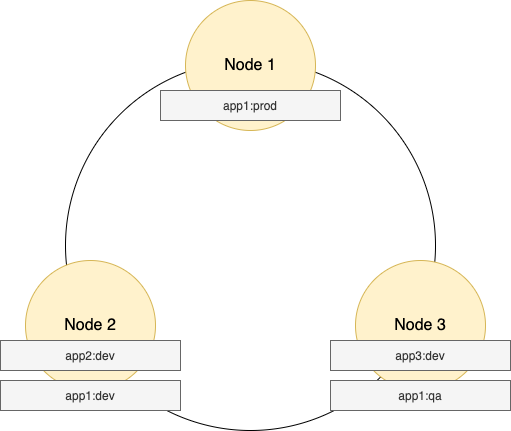 As we can see above, the possible scenario where the hash value of app1:prod, app1:dev, app1:qa resulted in these three rows being stored in three separate nodes — Node1, Node2, and Node3, respectively.

Most importantly, to efficiently retrieve data, the where clause in fetch query must contain all the composite partition keys in the same order as specified in the primary key definition:

As we've mentioned above, partitioning is the process of identifying the partition range within a node the data is placed into. In contrast, clustering is a storage engine process of sorting the data within a partition and is based on the columns defined as the clustering keys.

All the data within a partition is stored in continuous storage, sorted by clustering key columns. As a result, the retrieval of the desired sorted data is very efficient.

Let's look at an example table definition that has the clustering keys along with the composite partition keys:

And let's see some sample data:

By default, the Cassandra storage engine sorts the data in ascending order of clustering key columns, but we can control the clustering columns' sort order by using WITH CLUSTERING ORDER BY clause in the table definition:

Per the above definition, within a partition, the Cassandra storage engine will store all logs in the lexical ascending order of hostname, but in descending order of log_datetime within each hostname group.

Now, let's look at an example of the data fetch query with clustering columns in the where clause:

What's important to note here is that the where clause should contain the columns in the same order as defined in the primary key clause.

In this article, we learned that Cassandra uses a partition key or a composite partition key to determine the placement of the data in a cluster. The clustering key provides the sort order of the data stored within a partition. All of these keys also uniquely identify the data.

We also touched upon the Cassandra architecture and data modeling topics.

For more information on Cassandra, visit the DataStax and Apache Cassandra documentation.