Linux provides a number of commands for viewing files. In this tutorial, we’ll look at the most commonly used cat, more and less commands.

Let’s look at an example:

This will print the contents of the file a.txt:

Sometimes, we might want to number the lines in the output.

We can do this by using the -n option:

This will number each line in the output:

Note that the line numbering starts from 1.

Let’s look at a few other significant options:

The cat command is all well and good for small files. But, if the file is large, the contents will zoom past and we’ll only see the last screen worth of content.

One way to overcome this is by using the more command.

Let’s use this command on a pom.xml file: 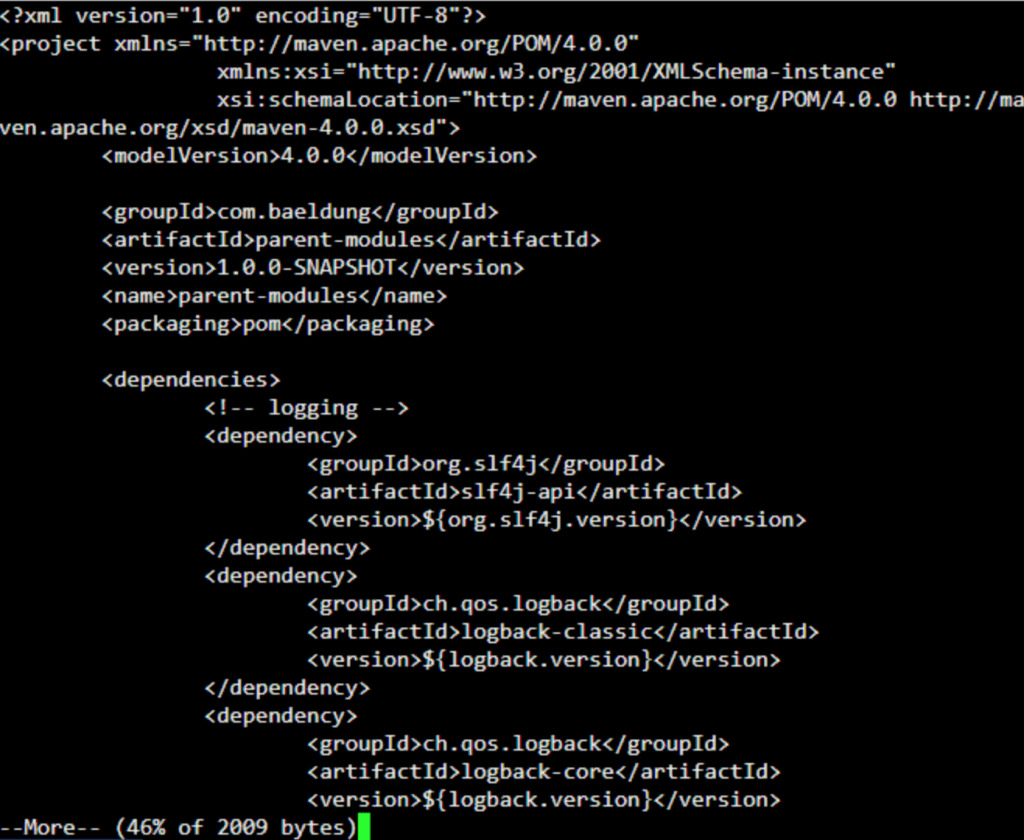 Note the text “–More–(46%)” at the end of the output. Here, the text “(46%)” tells us that the file is big and we’re currently seeing only 46% of the content. This percentage will increase as we traverse through the file.

The cursor will stay at the end of this text. Then, we can scroll through the contents of the file using the Enter key, one line at a time.

We can also scroll through the file page by page by using the Space bar. And to scroll back to the previous page, we can use the b key. We’ll use the q key to go back to the command prompt.

The more command can also be used to view multiple files. We just have to list each of them one after another:

Later, we’ll see how to move between these files.

Along with files, we can also pipe the more command with the output of other commands:

It’s important to note that more allows backward movement only with files, not with pipes.

As well as the keys used above, we can use a few other commands while viewing the file.

Let’s look at a few important ones:

Also, we can use h or ? at any point to list all the commands that can be used with more.

The more command also allows us to specify various options on the command line to customize the output. Let’s look at a few of these.

This will display the first 5 lines of the file instead of a screen worth of content.

Subsequently, when we use the Space bar, the next 5 lines will be shown. Similarly, the b key will show the previous 5 lines.

We can also specify the line number in the file from where we want to start viewing the content:

This will cause the output to start from the 10th line.

3.4. Start From the First Occurrence of a Text

It’s possible to search for a particular text in the file and start viewing the file from that point:

The above command will output the file contents from the first occurrence of the text “slf4j” in the file.

Apart from the above, the more command provides a few other options. Let’s briefly look at these:

Now, let’s move to the less command. The less command is similar to the more command but provides extensive features. One important one is that it allows backward as well as forward movement in the file, even with pipes.

Also, since it does not read the entire file before starting, it starts up faster compared to text editors — especially when we’re viewing large files.

This should show us the first page of the file with a prompt at the end: 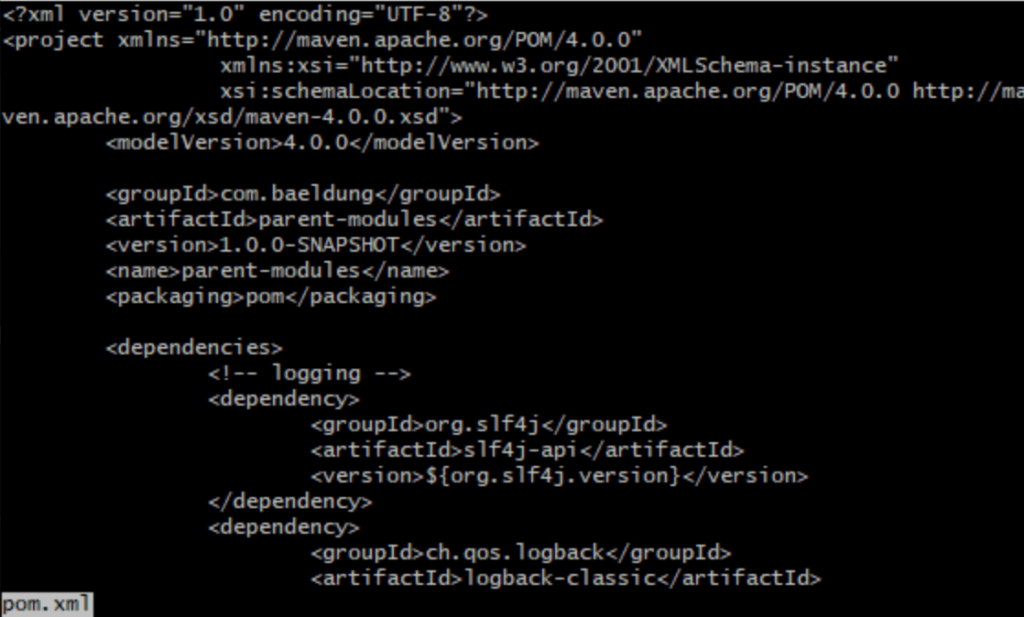 Note how the file name is displayed at the prompt.

Unlike more, if the file content fits the screen, less will still display the prompt. To override this we have to specify the -F option.

Like cat, it’s possible to number the lines in the file. For this, we’ve to specify the -N or –LINE-NUMBERS option.

Just like more, we can execute a number of commands while viewing the contents. There are too many to list here, so let’s look at the most common ones.

4.1. Moving Around the File

The keys Space, Enter, b, and q work the same way as with more. Apart from this, we can use the arrow keys to move horizontally and vertically. As an alternative to the up arrow, we can use j to move one line forward. Similarly, k can be used to move one line backward.

We can prefix the above keys with a number to override the default movement. For example, 5 followed by j will take us 5 lines forward.

The less command’s especially useful for viewing large log files. And most times, the reason we’re viewing a log file is to search for an error or look for a log statement.

So, to search for a particular text, we’ll use /<pattern>. Here, <pattern> is the text we are searching for and can be a regular expression.

Now, it’s also possible to view only the lines in the file that match the pattern. This way, we’ll have less text to go through. We can do this by using &<pattern>.

One interesting feature that less provides is the ability to monitor files. So, every time the content of the file changes, we’ll be able to view the changes.

We can achieve this by using the F key. It’ll take us forward and keep trying to read when the end of file is reached. This behavior is similar to the “tail -f” command.

In this article, we saw how to view files using the cat, more, and less commands. As for less, we only covered the most commonly used features. But, less provides a lot more.

We can use “less -h” or the h key, while in the viewer, to list all the features provided.