In this tutorial, we’ll learn to apply supervised learning in Kotlin. We’ll take a look at two algorithms; one simple and one complex. Along the way, we’ll also talk about correct dataset preparation.

A supervised learning model is built upon a machine learning algorithm. Multiple kinds of algorithms exist.

Let’s start by looking at some general concepts, and we’ll continue with some of the well-known algorithms thereafter.

To begin with, we’ll need a dataset. The perfect dataset is prelabeled and its features are relevant and transformed to be given as input to the model.

Unfortunately, the perfect dataset does not exist. Consequently, we’ll need to prepare the data.

Data preparation is crucial when doing supervised learning. Let’s first take a look at our dataset inspired by the Wine Quality Dataset:

Firstly, let’s begin by handling the missing cells in our dataset. Multiple techniques exist to handle missing data in a dataset.

In our case, for instance, we’ll delete the row containing the missing type of wine because the type is important here as it helps to explain the other features. On the other hand, we’ll also replace the missing numerics by the average of the existing values for the feature:

To clarify, we also made sure to round them up respecting the decimal precision of the column.

Secondly, let’s continue by transforming the categories white and red into numerical values. We consider this feature as being a categorical feature. As for the missing data, multiple techniques apply to categorical data.

In our case, as mentioned earlier, we’ll replace values by numerical values:

The last step we’ll take to prepare the dataset will be feature scaling. To clarify, feature scaling is a process to get multiple features on the same scale of values, usually [0, 1] or [-1, 1].

In the case of our dataset, for example, we’ll use min-max scaling.

Min-max scaling is a technique consisting of creating a scale going from the min to the max value of a specific column.

For example, in the Dioxide column, 14 becomes 0 as being the smallest value and 47 will become one. Consequently, all other values will fit in-between:

Finally, now that our dataset is prepared, we can focus on the model.

The model is the algorithm taking the inputs from our dataset and producing output. In addition, more information on supervised learning algorithms can be found in this introductory article.

Let’s take the example of an artificial neural network to explain the coming concepts with some examples: 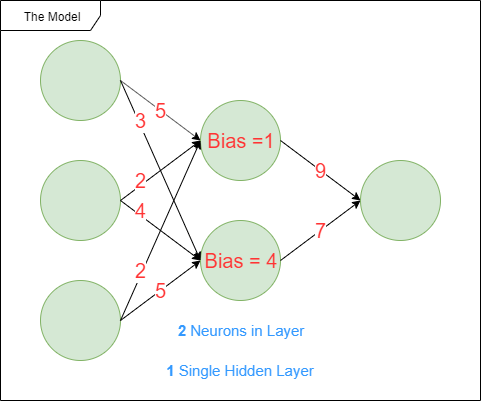 We tend to speak about different kinds of parameters when working on machine learning models. They evolve while the model trains to fit the optimal behavior the model should have. We’ll think about the multiplicators on the input data for example that will be adjusted during training. Some possible parameters are represented by the red values in the illustration.

Let’s now take a look at two kinds of machine learning algorithms: linear regression and artificial neural networks. Other algorithms exist of course (SVM, logistic regression, decision trees or Naive Bayes to name a few) but we’ll not focus on them in this article.

Linear regression is, as its name suggests, a regression algorithm. It exists in multiple variants:

Other types of linear regression exist but are less common.

Simply put, linear regression takes a dataset (blue dots) and projects a reasonable line (red) through them for extrapolating conjectures from new data: 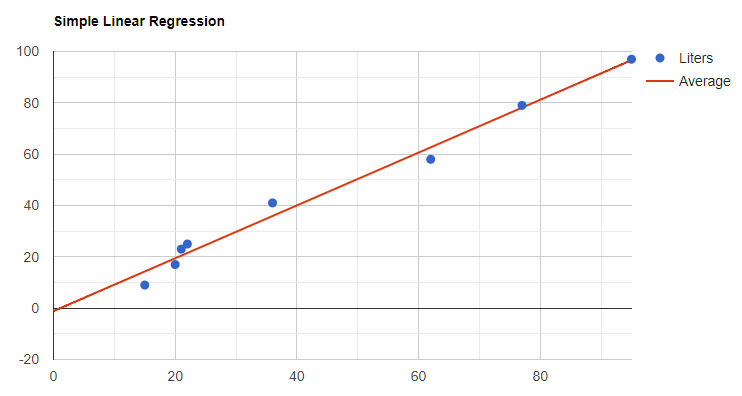 ANNs can be used to solve regression and classification problems. They usually excel in image recognition, speech recognition, medical diagnosis or machine translation for instance.

We might visualize an artificial neural network composed of input and output neurons, as well as a hidden layer of neurons (also called a dense layer): 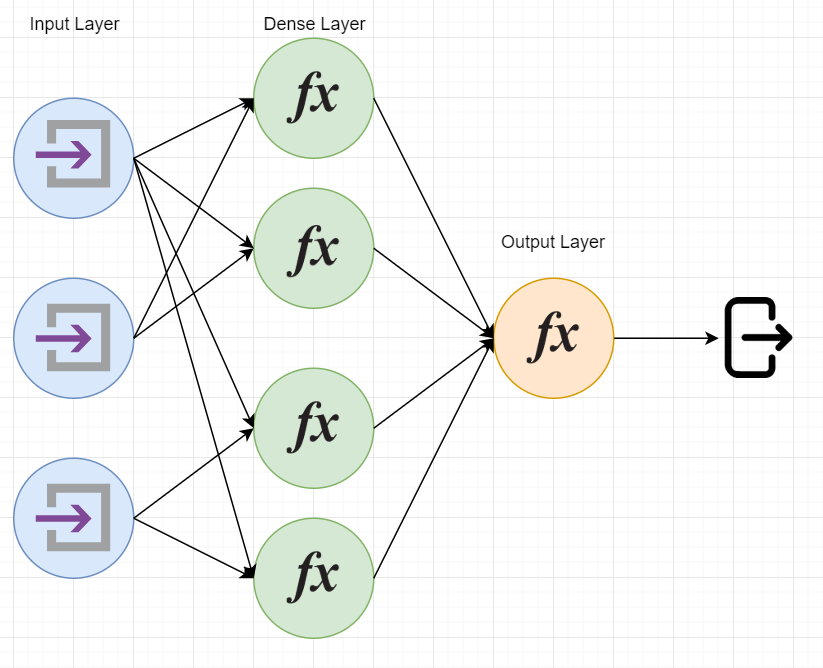 Firstly, we’ll see how it’s possible to create a model natively in Kotlin or any other language. Let’s take simple linear regression for example.

As a reminder, simple linear regression is a model predicting a dependent variable using an independent one. For instance, it could predict the amount of milk necessary in a family depending on the number of children.

Let’s take a look at the formula of simple linear regression and how to get the value of the required variables:

Let’s now convert this pseudo-code to Kotlin and use a dataset representing the median salary in thousands per year of experience:

Now that we have a model built, we can use it to predict values. For instance, how much does someone with 2.5 or 7.5 years of experience should be entitled to earn? Let’s test it:

The result seems to correspond to the expected behavior. But how can we evaluate this statement?

We’ll use a loss function (R² in this case) to calculate how well the years of experience explains the dependent variable salary:

Finally, we get 0.95 for R² which means that the years of experience explains with an accuracy of 95% the salary of an employee. This is thus definitely a good model for predictions. Other variables could be negotiation skills or the number of certifications for example to explain the remaining 5%. Or possibly just randomness.

For the purpose of this demo, we’ll use the Zalando MNIST dataset to train a convolutional neural network. The dataset consists of 28×28 images of shoes, bags and eight other kinds of clothing.

Now that we’ve added the required dependencies, let’s download and prepare the dataset. It is available from the Zalando MNIST GitHub page. We’ll prepare it by appending the labels at the end of the pixels vectors:

Let’s now build our neural network. For that, we’ll need:

We now have a model and dataset ready. We still need a training routine:

Moreover, we need a piece of code testing the model against the test dataset:

We can finally invoke all these methods one after the other and take a look at the performance of our model:

Finally, after a few minutes of training, we’ll be able to see how our model is doing:

We’ve seen how to use supervised learning to train a machine learning model using Kotlin. We’ve used Deeplearning4j to help us with complex algorithms. Simple algorithms are even implementable natively without any library.

As usual, the source code is available on GitHub.