Virtualization and containerization are the two most frequently used mechanisms to host applications in a computer system. Virtualization uses the notion of a virtual machine as the fundamental unit. Containerization, on the other hand, uses the concept of a container. Both of these technologies play a crucial role and have their merits and demerits.

In this article, we’ll introduce both these technologies and compare some of the characteristics.

Virtualization helps us to create software-based or virtual versions of a computer resource. These computer resources can include computing devices, storage, networks, servers, or even applications.

It allows organizations to partition a single physical computer or server into several virtual machines (VM). Each VM can then interact independently and run different operating systems or applications while sharing the resources of a single computer.

2.1. How Does Virtualization Work?

Hypervisor software facilitates virtualization. A hypervisor sits on top of an operating system. But, we can also have hypervisors that are installed directly onto the hardware. Hypervisors take physical resources and divide them up so that virtual environments can use them.

When a user or program issues an instruction to the VM that requires additional resources from the physical environment, the hypervisor relays the request to the physical system and caches the changes. There are two types of hypervisors, Type 1 (Bare Metal) and Type 2 (Hosted). 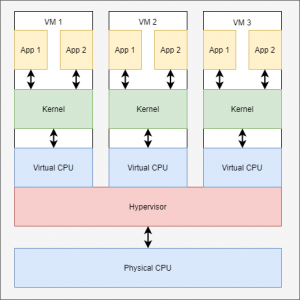 The main feature of virtualization is that it lets you run different operating systems on the same hardware. Each virtual machine’s operating system (guest OS) does all the necessary start-up activities such as bootstrapping, loading the kernel, and so on. However, each guest OS is controlled through elevated security measures so that they don’t acquire full access to the underlying OS.

Containerization is a lightweight alternative to virtualization. This involves encapsulating an application in a container with its own operating environment. Thus, instead of installing an OS for each virtual machine, containers use the host OS.

3.1. How Does Containerization Work?

Each container is an executable package of software that runs on top of a host OS. A host can support many containers concurrently. For example, in a microservice architecture environment, this set up works as all containers run on the minimal, resource-isolated process that others can’t access. 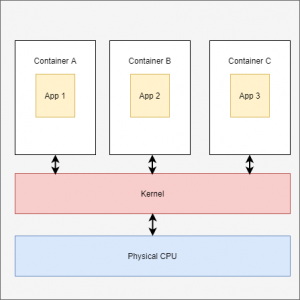 The preceding diagram demonstrates the layout of containerized architecture. We can consider a container as the top layer of multilayered cake:

Containerization evolved from a Linux feature known as cgroups. It’s a feature for isolating and controlling resource usage for an operating system process.

For example, it defines the amount of CPU and RAM or the number of threads that a process can entitle to access within the Linux kernel. cgroups later became Linux Containers (LXC) with more advanced features for namespace isolation of components, such as routing tables and file systems.

Let’s summarise the comparison between virtualization and containerization on various aspects:

In this tutorial, we talked about virtualization and containerization.

We concluded the article by comparing several aspects of virtualization and containerization.