Virtualization is a technique to divide the computer resources logically. It’s achieved by abstracting away the underlying complexity of resource segregation. Although an old technology, it’s still a popular technique and highly relevant in this era of cloud computing.

In this tutorial, we’ll discuss various aspects of virtualization such as the concept, its types, and its workings.

Virtualization helps us to create software-based or virtual versions of a computer resource. These computer resources can include computing devices, storage, networks, servers, or even applications.

It allows organizations to partition a single physical computer or server into several virtual machines (VM). Each VM can then interact independently and run different operating systems or applications while sharing the resources of a single computer.

3. How Does Virtualization Work?

Hypervisor software facilitates virtualization. A hypervisor sits on top of an operating system but we can also have hypervisors that are installed directly onto the hardware. Hypervisors take physical resources and divide them up so that virtual environments can use them.

When a user or program issues an instruction to the VM that requires additional resources from the physical environment, the hypervisor relays the request to the physical system and caches the changes. 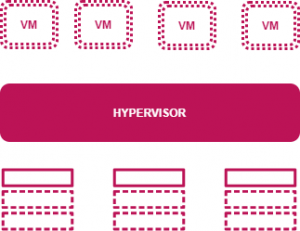 A virtual machine created by a hypervisor functions as a single data file, and we can move it from one computer to another, open it there, and it works the same as on any other machine. Thus, it provides a lot of flexibility and portability.

Hypervisors are available in two categories:  Type 1 and Type 2.

These categories of hypervisors are more popular and secure than the Type 2 hypervisors.

Type 1 hypervisors have a lower amount of latency and are the most used in the market. Some examples of these hypervisors are VMware ESXi, Microsoft Hyper-V, or open-source Kernel-based VMs (KVMs).

On the other hand, for Type 2 hypervisors, there is a layer of host OS that sits between the physical server and the hypervisor. For this reason, we call these hypervisors “hosted hypervisors”.

They are less common and mostly used for end-user virtualization.

They are known to have more latency compared to Type 1 due to their hosted nature. Type 2 hypervisors include Oracle VirtualBox or VMware Workstation.

Virtualization is classified into several categories based on the resource we virtualize.

Servers are computers designed to process a high volume of specific tasks so that other computers such as laptops and desktops can do a variety of different jobs. Virtualizing a server lets it do more of those particular functions and involves partitioning it so that the components can serve multiple purposes.

The ability to run multiple virtual machines in one piece of physical infrastructure drastically reduces the footprint and the associated cost. Moreover, as this consolidation is done at the core, we don’t need to maintain as many servers. We also have a reduction in electricity consumption and the overall maintenance cost.

Spinning up a virtual machine is a straightforward and quick approach. It’s a lot simpler than provisioning entirely new infrastructure.

For instance, if we need a development/test region for a team, it’s much faster to provision a new VM for the system administrators. Besides, with an automated process in place, this task is swift and similar to other routine tasks.

In this article, we provided an introduction to virtualization and discussed how it works. We then talked about different hypervisors.

Finally, we discussed different types of virtualization and its benefits compared to traditional non-virtualized computing.