In this tutorial, we’ll discuss the trie data structure, also called a prefix tree. We’ll briefly go through the basics and then see how to implement the most important features: insert, lookup, and prefix search.

A trie or a prefix tree is a particular kind of search tree, where nodes are usually keyed by strings.

Tries can be used to implement data structures like sets and associative arrays, but they really shine when we need to perform an ordered traversal or to efficiently search for keys starting with a specific prefix.

For this reason, they are very often used when implementing features like autocompletion.

In the basic implementation of a trie, each node contains a single character and a list of pointers to its children nodes. The key for the node is not explicitly stored: instead, we can derive it by computing the path from the root to the node. 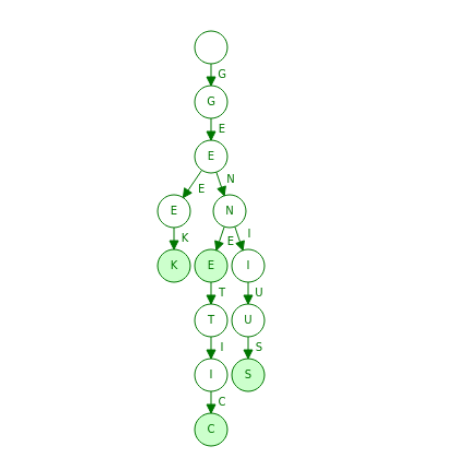 To distinguish which nodes in the tree represent valid keys, a boolean flag is used. Additionally, nodes can contain a pointer to arbitrary data, if we’re using the trie to implement an associative array data structure.

The figure shows a trie storing the keys “geek”, “genius”, “gene” and “genetic”, where highlighted nodes represent valid keys. By construction, all leaf nodes are valid keys, but for those who are not leaf nodes, we’ll need to set the boolean flag to true.

4. Insert an Element in a Trie

To insert an element into a trie, we need to start from the root node and traverse the tree down, only creating nodes when they’re missing. When we’ve created all necessary nodes, we’ll set the boolean flag to true on the last one.

Conversely, if the word “genetic” is already in the tree, and we’re now inserting the word “gene”, we won’t need to add any new node to the tree.

The only action to perform will be to mark the end node as a valid key:

Lookup is used to see if a specific key is contained in the tree, and, if we’re implementing an associative array, to return the data associated with the key.

It’s very similar to the insert algorithm, but this time, when we find a missing node we’ll know that the value we’re looking for is not present. If the iteration has completed, it means we’ve found a matching path from the root to a node, and we just need to check if it’s a valid key.

Note that in both the insert and lookup algorithms, we never had to traverse the tree itself, using, for example, depth-first or breadth-first search. A traversal has never been needed because the path that we have to follow is provided in the input itself.

We’ve seen the fundamental operations on a prefix tree. And, it’s now time to see where they excel, that is, retrieving all words with a given prefix from a vocabulary.

To do this we’ll:

Here’s how this looks in practice: