In this tutorial, we’ll talk about the problem of finding the number of subarrays with a given sum

First, we’ll define the problem and provide an example to explain it. Then, we’ll present two different approaches to solving it and work through their implementations and time complexity.

Suppose we have an array

, and we were asked to count the number of subarrays with a sum equal to

Recall that a subarray of an array is a consecutive range of the array elements.

Let’s take a look at the following example:

and a desired sum

(red cells define a subarray with sum equal to 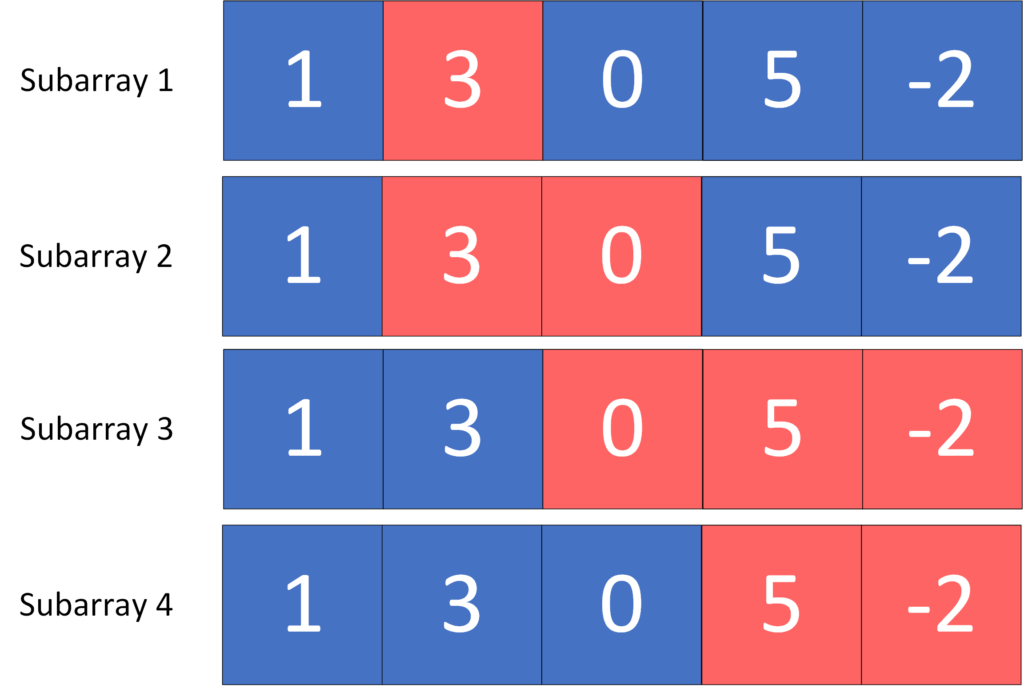 As we can see, the answer here is four because there are

subarrays with a sum equal to

Initially, we’ll go through every possible start of a subarray. Then, we’ll fix it for each start and try all the possible ends. Next, while we’re looking for a valid end, we’ll add the current number to the sum of that subarray. If the sum of the current subarray is equal to

at some moment, we’ll increase the answer by one. Otherwise, we’ll ignore that subarray.

Finally, the answer will be equal to the number of subarrays with a sum equal to

. The function will have two parameters,

, which represents the given array, and

, which will store the number of valid subarrays. Next, we’ll try to start a new subarray from each position of the given array

, which will store the sum of the subarray that will begin at

Then, we’ll iterate over all the possible subarray ends. While we move the end pointer, we’ll add the element at the end to the

. If so, we increase the

by one. Otherwise, the current subarray is not valid.

The time complexity of this algorithm is

is the length of the given array

. This complexity is because we fixed it as a start of a subarray for each position of the given array and iterated overall positions that could be an end to that subarray.

Initially, we’ll calculate the prefix sum of the given array

. Next, for each given array position, we’ll try to fix it as an end to the subarray and get the count of possible subarray starts that make the subarray valid. We can represent the valid starts that give us a valid subarrays end at the fixed position in the following formula:

Therefore, the number of valid subarray starts that could end at the current position will equal the count of the prefix sum values of positions that come before the

. Then, while we’re moving the

of the prefix sum value at that position.

will represent the number of subarrays with a sum equal to

Initially, we have the same

function as the previous approach.

First, we declare the

array, which will store the sum of all elements from the beginning of the given array up to a specific position. We compute the

of the given array

by applying the formula

, which will store the number of valid subarrays. Furthermore, we declare the

hashmap, which will store the count of occurrences of a specific

Third, we iterate over each position and fix it as the end of the subarray, and we will want to get the count of all possible subarray starts. The subarray that ends at position

will have a valid start

the number of positions with a

. After that, we’ll increase the

The time complexity of this algorithm is

is the length of the given array

. This complexity is because we iterate over each element only once.

Note: the previous time complexity could be multiplied by a constant factor representing the hashmap operations’ complexity.

In this article, we discussed the problem of finding the number of subarrays with a given sum

. We provided an example to explain the problem and explored two different approaches to solve it, where the second one had a better time complexity.

Finally, we walked through their implementations and explained the idea behind each of them.