In this tutorial, we’ll study SSL certificate verification. In brief, we verify a public key certificate by checking its authenticity. Authenticity here means that all pieces of information included in the certificate are valid.

We’ll first explain the use of asymmetric cryptography for encryption and signatures. Then, we’ll justify the need for public key certificates. This will finally lead us to the role of SSL certificates and the process of verifying them.

In asymmetric cryptography, a network user has two keys: a private key and a public one. So, user

has a public key

, which is known to all other users. Also,

has a private key

which is known only to

. One of the possible uses of such a setup is encryption and decryption.

Let’s assume that our friend Alice (also known as

to her friend Bob (

). If she sends the message over a communication channel, an intruder (

) listening to the channel would thus be able to read it. Alice, therefore, encrypts

, even if he intercepted

, Bob has to use his private key.

In such a way, asymmetric cryptography enables anyone to send encrypted messages to Bob since

is publicly known. However, only Bob can decrypt the message sent since he’s the only one who knows

. Moreover, we can use public/private key pairs for digital signatures.

In the current scenario, our friend Alice would like to buy a car. She goes to Bob, who is a car dealer. Alice chooses a car, thus writing and signing a check to pay Bob. Bob will therefore present the check to the bank to cash it. Of course, the bank will need to analyze whether the check is authentic. To do so, employees at the bank will thus perform two verification steps:

In other words, they need to evaluate the origin and integrity of the check.

We’re now talking in terms of paper checks. But what if we wanted to digitalize this process? Let’s talk about digital signatures!

to the bank with instructions to transfer a certain amount to the car dealer’s account.

as input. With these inputs, the algorithm produces Alice’s signature over

. Thus, due to the use of a private key, we are confident that no one else can produce the same signature over

Alice then sends the message

to the bank. Of course, the bank needs to inspect if the message

is authentic. In other words, it needs to confirm that Alice really produced the signature

and that no one modified

. This process is the role of the signature verification algorithm.

The verification algorithm at the bank receives Alice’s public key

. It then gives a yes or no answer:

Let’s clarify some points here. First, when the bank receives a message, it assumes an intruder may have modified the message during transmission. This scenario justifies why we write the message as

. Second, the bank makes no assumptions about who produced the signature. This is why we write

So, the bank needs to obtain Alice’s public key in order to be able to run the verification algorithm. But how does the bank finds this key? Let’s see in the following section.

In asymmetric cryptography, we need to publish public keys. We also need to know the owner of each public key. A certificate ties the value of a public key to the identity of its owner. In such a way, we can use this key to encrypt messages sent to the key’s owner. We can also use the key to verify its owner’s signatures.

A user keeps his private key secret and never shares it with anyone. On the other hand, the user needs to share his public key along with their identity.

For example, Alice needs to publish the information

in some directory server, such as a server using the Lightweight Directory Access Protocol (LDAP).

Then, when other users would like to find the value of Alice’s key, they can search this directory using Alice’s identity

. So, the directory service returns the data structure

There is some inherent risk in this system, though: what if some intruder

)? If so, this directory will contain

Now users will send messages to Alice encrypted by

will be able to decrypt them. Moreover,

while pretending to be Alice.

In this way, any user receiving these signatures will verify them (successfully) using

will be able to fool other users.

It’s in this scenario that public key certificates come into play!

) issues public key certificates to prevent the attack described in the last subsection.

. In this case, a user searching for

‘s public key and receiving the certificate can verify it:

The verification will be successful only if no one modified the certificate information. To understand this, consider the previous attack. The intruder that tries to impersonate

may be able to change the certificate information to be

We note that the intruder cannot generate

‘s signature over the forged information. This is because

‘s private key. Consequently, the verification will fail, and any user receiving the certificate will reject it.

Users verify a public key certificate by verifying the

‘s signature included in the certificate. However, in order to do that, users need

‘s public key. This key is included in a certificate that has the following content:

In other words, this is a certificate that the

issues for itself and signs its contents. It is thus called a self-signed or root certificate.

‘s signature. The verification will be successful since

‘s public key with its own key

. This is why we never send root certificates over public channels. Instead, they’re pre-installed in software such as operating systems and web browsers.

There are some practical considerations when we’re developing a system for public key certificates:

We must tackle these issues when we build a system for certificates (also called a Public Key Infrastructure – PKI).

The Secure Sockets Layer (SSL) protocol uses certificates to create a secure link between a client and a server. For instance, a web server may use SSL to set up keys for encrypting traffic between itself and clients.

The SSL protocol starts with a handshake in which the client and server establish an encryption key. This key is used by a symmetric encryption algorithm to encrypt future traffic. During the handshake, the server sends its public key certificate to the client.

The server’s certificate, in turn, contains information such as the domain name and the server’s public key, and it’s signed by a

. The public key is used to authenticate the server to the client and to establish a symmetric encryption key. 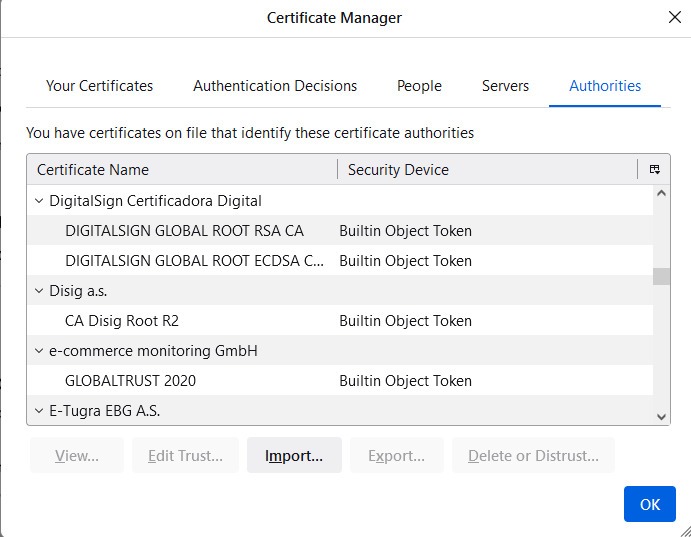 In this article, we explained the role of SSL certificates and how they are issued and verified. In fact, they’re extensively used by Internet protocols to secure connections to servers. SSL certificates enable us to use services that exchange sensitive data, such as in contexts of Internet banking or e-commerce. Of course, these applications wouldn’t be possible without proper verification of certificates.