are the input features,

are the weights, and

is the bias of the neuron. Then, an activation function

is applied at the value of every neuron and decides whether the neuron is active or not:

In the figure below, we can see diagrammatically how an activation function works:

. It is calculated as follows:

is the output value of the neuron. Below, we can see the plot of the sigmoid function when the input lies in the range 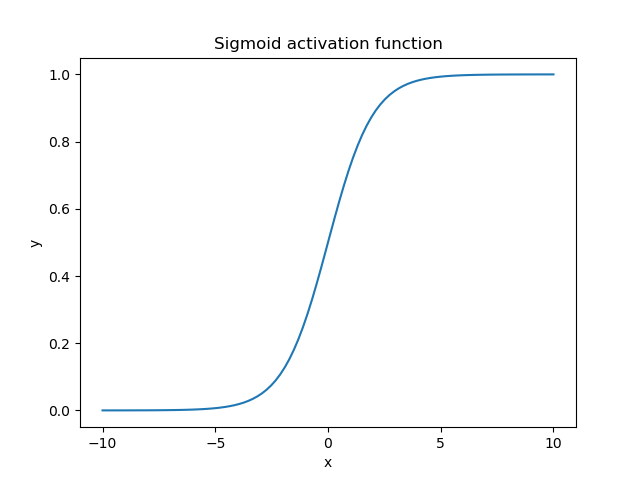 As expected, the sigmoid function is non-linear and bounds the value of a neuron in the small range of

. When the output value is close to 1, the neuron is active and enables the flow of information, while a value close to 0 corresponds to an inactive neuron.

Also, an important characteristic of the sigmoid function is the fact that it tends to push the input values to either end of the curve (0 or 1) due to its S-like shape. In the region close to zero, if we slightly change the input value, the respective changes in the output are very large and vice versa. For inputs less than -5, the output of the function is almost zero, while for inputs greater than 5, the output is almost one.

Finally, the output of the sigmoid activation function can be interpreted as a probability since it lies in the range

. That’s why it is also used in the output neurons of a prediction task.

Another activation function that is common in deep learning is the tangent hyperbolic function simply referred to as tanh function. It is calculated as follows:

We observe that the tanh function is a shifted and stretched version of the sigmoid. Below, we can see its plot when the input is in the range 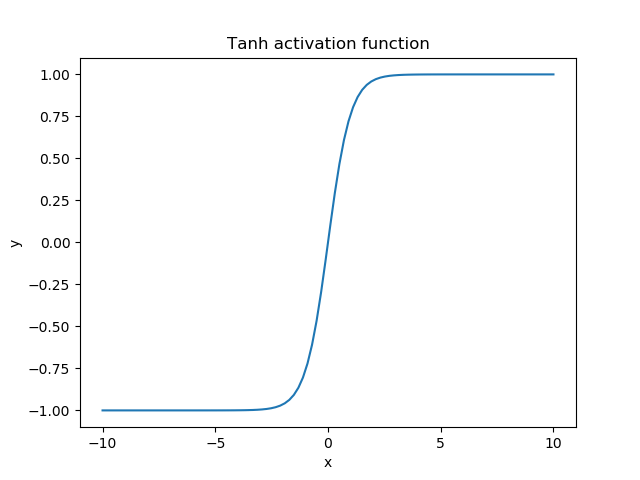 The output range of the tanh function is

and presents a similar behavior with the sigmoid function. The main difference is the fact that the tanh function pushes the input values to 1 and -1 instead of 1 and 0.

Both activation functions have been extensively used in neural networks since they can learn very complex structures. Now, let’s compare them, presenting their similarities and differences.

As we mentioned earlier, the tanh function is a stretched and shifted version of the sigmoid. Therefore, there are a lot of similarities.

Both functions belong to the S-like functions that suppress the input value to a bounded range. This helps the network to keep its weights bounded and prevents the exploding gradient problem where the value of the gradients becomes very large.

An important difference between the two functions is the behavior of their gradient. Let’s compute the gradient of each activation function:

Below, we plot the gradient of the sigmoid (red) and the tanh (blue) activation function: 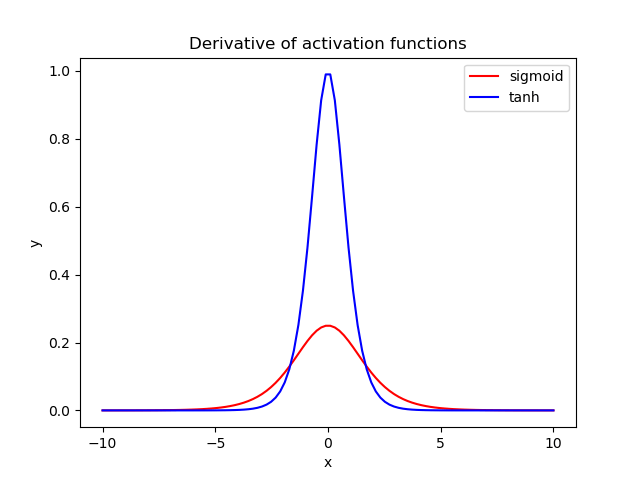 When we are using these activation functions in a neural network, our data are usually centered around zero. So, we should focus our attention on the behavior of each gradient in the region near zero.

Another difference is that the output of tanh is symmetric around zero leading to faster convergence.

Despite their benefits, both functions present the so-called vanishing gradient problem.

In neural networks, the error is backpropagated through the hidden layers of the network and updates the weights. In case we have a very deep neural network and bounded activation functions like the ones above, the amount of error decreases dramatically after it is backpropagated through each hidden layer. So, at the early layers, the error is almost zero, and the weights of these layers are not updated properly. The ReLU activation function can fix the vanishing gradient problem.

Finally, we’ll present an example of applying these activation functions in a simple neuron of two input features

. Below, we can see the output value and the gradient when we use the sigmoid (left) and the tanh (right) activation function:

The above example verifies our previous comments. The output value of tanh is closer to zero, and the gradient is four times greater.

In this tutorial, we talked about two activation functions, the tanh and the sigmoid. First, we introduced the term, and then we described and compared the two functions along with an example.