In this tutorial, we’ll talk about the problem of finding the shortest cycle in an undirected graph.

First, we’ll define the problem and provide an example to explain it. Then, we’ll present a solution for this problem and work through its implementation and time complexity.

Suppose we have a connected undirected graph

edges. We were asked to get the shortest cycle length in the given graph

. (Recall the cycle is a path that starts from a given vertex and ends at the same vertex).

Let’s take a look at the an undirected graph

for a better understanding: 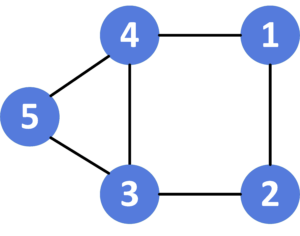 As we can see, there are several cycles in the previous graph:

Therefore, the answer for the given graph would be equal to

The main idea of this approach is to use DFS traversal on the given graph. For each visited node, we’ll have a cycle of length equal to the current node’s depth minus the previous node’s depth.

First, we’ll run a normal DFS traversal on the given graph

. Second, for each node we visit, we’ll mark it visited and store the depth of it. Then, if we reach a node that has been visited before. This case will create a cycle with a length equal to the current depth of DFS traversal minus the node’s depth that we’ve stored before.

Finally, the shortest cycle length in the graph will be the minimum value among all the DFS calls.

. The function will have five parameters: the adjacency list of the graph

, the parent of the current node

in the DFS traversal, and the

array, which will store the depth of each visited node. The initial value for all unvisited nodes is

First, we check if the

of the current node is not equal to

, which means this node has been visited before, and we have a cycle. So, we return the length of this cycle, which is equal to the current depth

Second, if the previous condition is not met, this

is not visited yet. So, we update the

of it to be equal to the current depth

, which will store the length of the shortest cycle with an initial value equal to infinity. Then, for each neighbor

, we’ll call our function on it, increase the current depth

by one, and try to minimize the

Note that we used all the neighbors of the current node, except for the parent. The parent is the node that we visited right before the current one. This is because, since it’s an undirected graph, each edge can be crossed in both directions.

This will cause our answer to always be equal

from the option of going back and forth any edge. Thus, we don’t return directly to the parent node but move to visit other nodes.

The time complexity of this approach is

is the number of vertices of the given graph

is the number of edges. The reason behind this complexity is that we’re visiting each vertex at most twice, and each edge at most once.

The space complexity here is

. since we’re storing the depth of each vertex.

In this article, we discussed the problem of finding the shortest cycle in an undirected graph. We defined the problem and provided an example to explain it.

Finally, we provided a DFS approach to solve it and walked through its implementation and time complexity.