According to Moore’s Law, the number of transistors on a microchip doubles every two years, and the cost is halved. While designing CISC, there is always a high risk because of greater complexity on the hardware side. It also takes more time to design new CISC architecture. On the other side, RISC is a simple architecture and it is simple to implement. It means it takes short time to market and it has a lower risk than CISC. For that reason, RISC is the inevitable conclusion of Moore’s Law.

Even though there are some debates about which one is better, we can say that there is no correct answer for this debate. Because both approaches have advantages and drawbacks. We can see the overall comparison between RISC and CISC in the figure below:

RISC (reduced instruction set computing) architecture is a design choice that aims to reduce the complexity of instructions and to deliver simple but powerful instructions that execute within a cycle at a high clock speed. It is proposed by David Patterson and John Hennessy.

Reducing the complexity of the instruction set performed by the hardware paves the way for providing flexible intelligence by using software rather than hardware. As a result, a RISC architecture design requires greater complexity on the compiler.

The RISC has some major design principles:

The most common examples of RISC are ARM which is used in many cell phones and PDAs, Sparc, and PowerPC.

CISC is the ancestor approach of CPU design. Because before some principles weren’t found, CISC was prominent in the sector. So, the CISC architecture aims to reduce the number of instructions per program while increasing the number of cycles per instruction.

The most common examples of CISC are x86 CPUs.

5. Differences Between RISC and CISC

Let’s also look at the figure below to understand the difference between the RISC and CISC. It’s an example of multiplying two numbers in the memory: 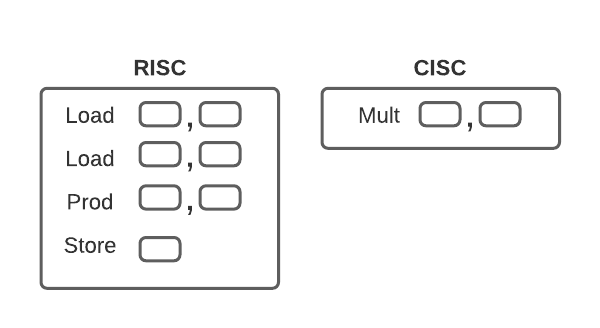 In the CISC approach, as we see in the figure, there is only one complex instruction “MULT”. It takes care of everything. It works directly on the memory of the computer. So it doesn’t need the programmer to manually invoke any loading or storing. It is similar to a command in a higher-level language.

In this tutorial, we’ve shared the details of the continuing debate on the design choices of the CPU. We’ve briefly given information about the RISC and CISC architecture. We’ve shared the advantages and disadvantages of both design choices. In recent days, since the ARM is proprietary, RISC-V comes on the stage and starts to change the market share in microprocessor architectures.