The evolution of networks and the Internet leads to the review of the communication protocols employed on it. It is a natural phenomenon since both the number of users and different technologies that rely on network communication have increased every year. Thus, the networks change according to these users and technologies requirements.

However, there exist characteristics of current TCP inherited from legacy TCP. So, to tackle these legacy characteristics, TCP considers the existence of a pseudo-header.

2. From Early TCP to Modern TCP/IP

However, at this point, TCP dealt with both network routing and transportation of network traffic. In summary, IP was not used in this context. Thus, information about a packet origin and destination, for example, was in charge of TCP.

The RFC 675 documented and presented in detail this early version of TCP. One of the most interesting points that show the difference between the early and modern TCP is their headers. The following image summarizes the early TCP header: 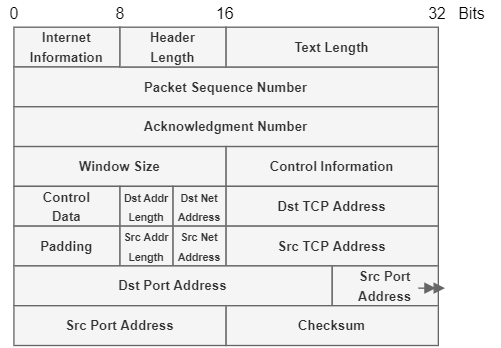 As time passed and the networks became more complex, the need for heterogeneous layers for network routing and transportation grew. In such a way, in 1976, the efforts to shift from early TCP to modern TCP/IP began. Finally, the RFC 791 and RFC 793 formally presented the modern TCP/IP in 1981.

With the network routing now handled by IP, TCP got simplified in terms of its required information. The following image depicts the modern TCP basic header:

3. The Pseudo-Header in TCP/IP

The transition from the early TCP to the modern TCP/IP led to some challenges. One relevant example is that TCP (both early and modern) is, by definition, an end-to-end protocol. In such a way, origin and destination addresses play a crucial role in sending and receiving messages over TCP.

For example, the TCP checksum must consider the endpoint addresses (as well as other information), ensuring that they were not corrupted in the transmission. However, in TCP/IP, relevant pieces of information are now located in the IP header instead of the TCP header. In this scenario, IP works as a wrapper for TCP in the network layer.

The pseudo-header contains a total of 12 bytes with the following fields:

The following image shows the fields that compose the pseudo-header:

One historical reason to use the pseudo-headers was security. The idea was to employ encryption and authentication in TCP and the pseudo-header data. In this way, the designers aimed to mitigate attacks, such as man-in-the-middle, by protecting addressing information.

However, there is a tense relation between IP and TCP because of the pseudo-header. It means that we’ll need to rethink TCP every time IP changes. For example, the transition from IPv4 to IPv6 will require modifications on the pseudo-header. As a consequence, the checksum calculation of TCP will change too.

Considering the described scenario, the designers will need to evaluate if keeping the pseudo-header is a good choice in the next generations of networks.

In this article, we learned about the pseudo-header in the context of modern TCP/IP. First, we studied the historical context from early TCP to TCP/IP. Then, we in-depth explored the concept of pseudo-header and saw applications of it. Finally, we discussed the challenges related to the pseudo-header nowadays.