In this tutorial, we’ll discuss how to merge two sorted arrays into a single sorted array and focus on the theoretical idea and provide the solutions in pseudocode form, rather than focusing on a specific programming language.

First, we’ll define the problem and provide an example that explains the meaning of merging two sorted arrays.

Finally, we’ll compare the provided approaches and discuss the case in which both of them have the same complexity.

The problem gives us two arrays,

. Both arrays are sorted in the increasing order of their values.

After that, the problem asks us to calculate the resulting array

that contains all the elements from

. Note that, the resulting array

must be sorted as well. In other words:

To understand the idea in a better way, let’s take the following example: 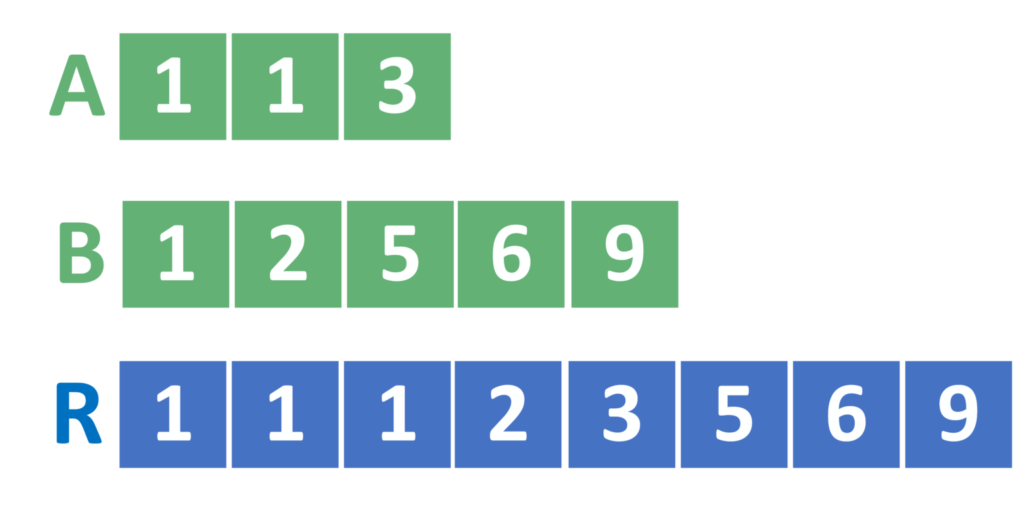 From the example, we can see that the array

elements, while the array

contains all the elements from

. For example, the array

twice. On the other hand,

once. Hence, the array

contains all the elements sorted in the ascending order, similarly to the arrays

Now that we reached a good understanding of the problem, let’s dive into the solutions.

Let’s discuss the naive approach firstly. After that, we can see how to improve it.

In the naive approach, we simply add all the elements from arrays

Take a look at its implementation:

In the beginning, we’ll declare the resulting array

. This array will hold the resulting answer to the problem. Also, we’ll initialize

After that, we iterate over all the values inside

and add them to the resulting array

. Also, we perform the same operation for all the values inside

Finally, we sort the array

and return it as the resulting answer.

is the number of elements inside the first array and

. It must be the smallest element inside

However, since both arrays

are sorted, then the smallest element of each of them is at the beginning. Therefore, we’ll add this value to

Now, let’s imagine that we removed this smallest value from its array, and think about the problem again. We’ll need to find the new smallest element and add it to

As a result, we can find a general approach to solve this problem. We start by defining two pointers

will point to the first element in

will point to the first element in

. In each step, we’ll add the smallest value to

and move the corresponding pointer one step forward.

Note that, since we always add the smallest value to

will be sorted in the end.

Since the idea is clear now, we can jump to the implementation of this approach.

Take a look at the implementation of the two-pointers approach:

with zero. These variables will serve as the needed two pointers. Therefore,

will point to the current index inside

will point to the current index inside

that will hold the resulting answer. Note that the array

must be of size

Next, we’ll iterate over all the indexes inside the resulting array

. For each index, we’ll store the minimum value among

and move the corresponding pointer.

Nevertheless, we mustn’t forget about the case when either

reaches the end of their arrays. In this case, we must store the value from the other array and move its pointer.

Finally, we return the resulting array

The complexity of the two-pointers approach is

is the number of elements inside the first array and

If all the elements inside

are relatively small, then we can sort the resulting array

is the number of elements inside the array, and

is the maximum number inside it.

Therefore, the complexity of the naive approach becomes

is the number of elements inside the first array,

is the number of elements inside the second array, and

is the maximum value inside both arrays.

As a result, if

, then the complexity of the naive approach becomes

Note that this complexity is similar to the complexity of the two-pointers approach. We can’t obtain a better complexity because the resulting array

has a size of

. Hence, in the best case, we still need to iterate over its elements and fill them one by one without performing any more operations.

In this tutorial, we discussed the problem of merging two sorted arrays into a resulting sorted array.

In the beginning, we discussed the problem with an example.

After that, we provided two approaches to solve the problem. The first approach was the naive one, while the second one was the two-pointers approach.

Finally, we presented a comparison between both approaches and provided the case in which both the naive and the two-pointers approaches reach the same complexity.