Next, let’s talk about interrupt-driven I/O. Interrupt-driven I/O is a technique in which the CPU doesn’t need to wait to check if the I/O device is ready or not, unlike programmed I/O. I/O device generates an interrupt to the CPU when the I/O device is prepared for I/O operation to take place. An example of a software interrupt is a signal to end a program like Microsoft Word so the CPU can speed up other programs like Microsoft Excel.

In the direct memory access (DMA) method, we transfer data directly between computer memory and I/O devices connected with a system. In this method, we don’t need to involve the CPU in the process of data transfer. DMA is an advantageous method for transferring a large amount of data as the CPU will be free while the data transfer takes place. Additionally,  hardware, including hard drives, graphics cards, and network cards for which transferring large amounts of data is important, uses the DMA method.

We can further divide programmed I/O into two categories: memory-mapped and isolated I/O.

There’re three types of buses required for I/O communication: address bus, data bus, and control bus. We assign an address to each I/O device for the CPU to communicate to that device using its address. 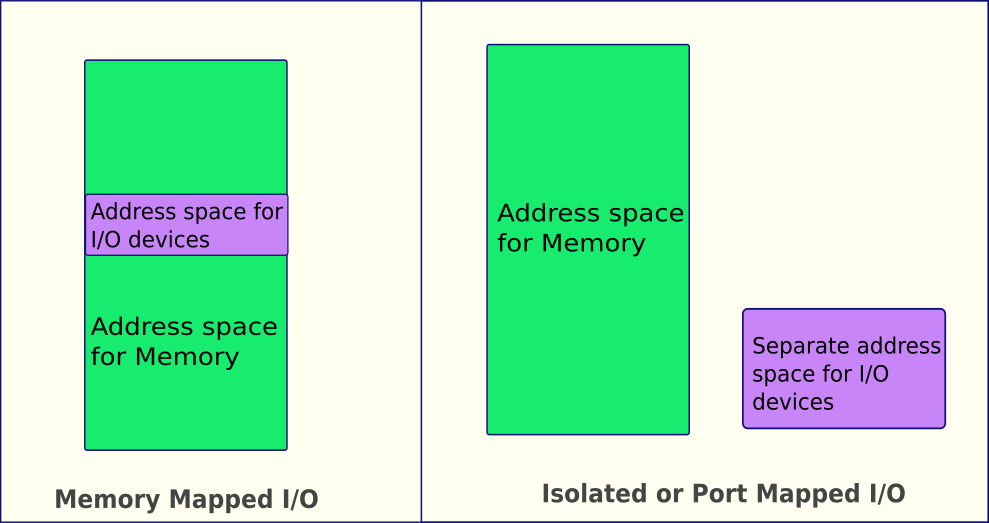 Therefore, isolated I/O becomes costlier compared to memory-mapped I/O. The isolated I/O technique has its own dedicated instruction set for accessing I/O devices. The CPUs that use isolated I/O are bigger and more complex to build.

For I/O devices, it doesn’t matter whether memory mapped or isolated I/O is implemented. I/O devices behave in the same manner independent of the I/O method implemented internally.

Now, let’s look at the core differences between memory-mapped and isolated I/O:

In this tutorial, we discussed the various methods in I/O operations. We explored two types of programmed I/O: memory-mapped and isolated I/O, in detail.

Finally, we presented the core differences between memory-mapped and isolated I/O.