In this tutorial, we’ll discuss a memory management technique in the operating system: inverted paging.

We’ll present the working process of this technique. Finally, we’ll explore the advantages and disadvantages of the inverted paging technique.

Inverted paging is a memory management technique that uses a secondary memory as a backing store for primary virtual memory. It provides a way to manage virtual memory in a system where the physical address of the virtual memory can’t be directly mapped to a storage device.

When a program tries to access a portion of the virtual address space that’s not mapped to physical memory, the OS uses a page table to map that virtual address to a page in secondary storage. The page table is essentially a mapping table with page identifiers.

When we use inverted paging, each page in the secondary storage is mapped to more than one page in the primary storage. When a program requests a page from virtual memory, the OS first looks up the page table to identify the page that corresponds to the virtual address.

As soon as the OS extracts the mapping information between the virtual and physical addresses, it copies the target page from secondary to primary storage.

Now let’s talk about how the inverted paging technique works in detail.

Inverted paging is a technique used in computer memory management to improve the speed of accessing data from memory. Furthermore, in inverted paging, we create a database or index that maps virtual addresses to physical addresses in memory.

The page-table mapping is also known as the inverted page table. Inverted paging works by mapping pages stored in non-volatile storage back to primary virtual memory. We need to store the page and inverted tables in a high-speed memory such as RAM: 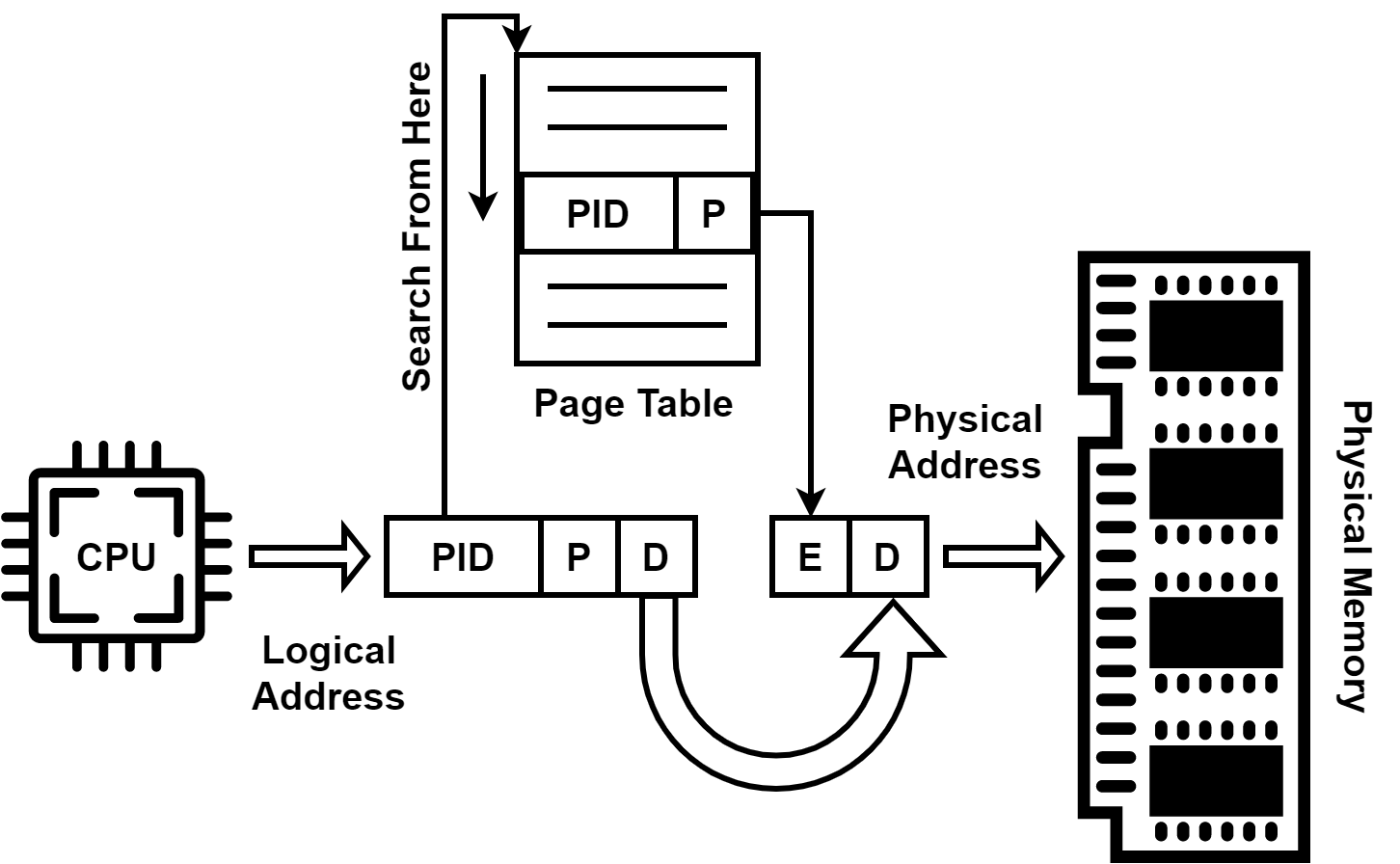 An inverted paging organizes the page table containing the logical page number (P) and the process ID (PID) of the process executing on the corresponding page. We forward the pair (PID, P) to the memory where the inverted page table exists in response to a memory reference.

After we forward the tuple, the memory accesses the inverted table in search of a match. Let’s assume we found a match at entry E in the table. Then, the corresponding physical address would contain entry E, where we found the match and the offset D.

Additionally, a task can be swapped out and brought in with the same page already mapped in primary virtual memory. It avoids the need for additional I/O operations to read the contents of the page from secondary storage. As a result, inverted paging enables faster context switching between tasks which plays a critical role in the efficient performance of the OS.

With a wide range of benefits, it also has several disadvantages, including high storage cost, increasing size of the page table, increasing page table lookups, and high complexity.

While inverted paging reduces paging operations and improves system performance, it increases the storage cost of virtual memory. In this technique, we map each page in secondary storage to more than one page in primary virtual memory.

We use a page table to map pages in primary virtual memory to pages in secondary storage. If we can’t fit the available virtual pages in the page table, the OS needs to find a way to map the remaining virtual pages. It may involve additional paging operations, resulting in slower context switching and system performance degradation.

Each time a program tries to access a virtual address that isn’t mapped to a physical address, the OS needs to map the address to a page in secondary storage. Hence, it results in an additional page table lookup that may slow down the execution of the program.

Additionally,  inverted paging can cause page replacement algorithms to become less effective since the page table isn’t always sorted in order of most-recently-used pages. Furthermore, it’s more complex to implement than other paging schemes, making it more challenging to maintain and debug.

Now let’s take a look at the table that summarizes the advantages and disadvantages of the inverted paging technique:

Finally, we presented the advantages and disadvantages of the inverted paging technique.