In this tutorial, we’ll learn how the Marching Squares algorithm determines the contour from a grid of sample points of the image.

for so long, that we give the matter little thought. Plotting functions of two variables is a much more difficult task.

The trick to putting together a reasonable graph of a function of two or more variables is to find a way to cut down on the dimensions involved. One way to achieve this is to draw certain special curves that lie on the surface

. These special curves, called contour curves, are obtained by intersecting the surface with horizontal planes

for various values of the constant

These curves in the

-plane are called the level curves of the original function

The level curve at height

is the curve in

defined by the equation

is a constant. In mathematical notation,

By definition, the level curve at height

Thus, we see that the level curves for

are circles centered at the origin of radius

. They are summarized in the table below:

The family of level curves, the “topographic map” of the surface

is shown in the figure below: 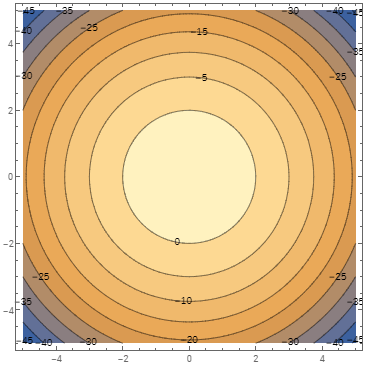 If we stack all level curves together, we can get a feeling for the complete graph of

. It’s a surface that looks like an inverted dish and is called a paraboloid: 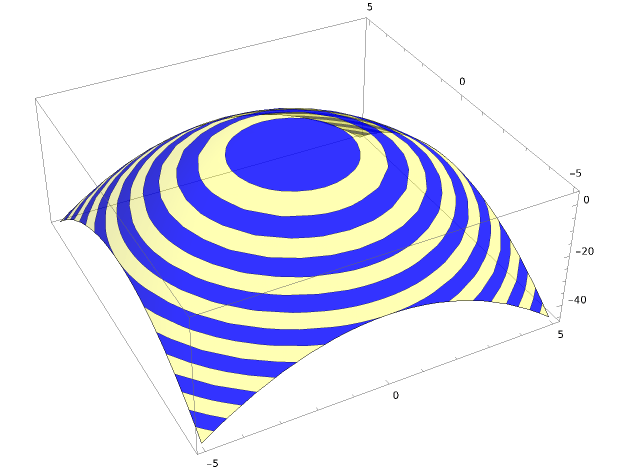 For our discussion, we require the output contour to possess the following properties:

3. Essentials of the Algorithm

Consider the simplistic image of a cloud given below. We are interested to trace the contours of the cloud: 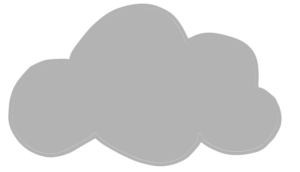 For simplicity, let’s assume that the image of a cloud is represented by a square matrix

represents a single sample of light, carrying brightness information. It ranges between

. Black is represented by

We divide the entire image domain

squares. Each square has dimensions by

. We sample the image at each of the

Next, we iterate through the grid

to determine the vertex state in comparison to an iso-value

. Each grid vertex is now assigned a binary state (

serves as a threshold for determining the vertex state. Suppose we choose

as the threshold. The vertex state is determined as follows:

3.2. Configuration of Each Sub-Grid

subgrid can be associated with a configuration. We iterate through

sub-grid, we form a binary code based on the vertex value by iterating clockwise from the top-left corner to the bottom-left corner.

For example, if a given subgrid has four corners:

its binary code is said to be

Thus, we have a configuration associated with each sub-grid as follows:

3.3. Lookup Table for the Contours

Imagine a single square with the contours of an object cutting through this square. That is, the square does not lie wholly in the interior or exterior of the object. A square has

edges and for each edge, we have

possible choices – either the contour(boundary) intersects this edge, or it does not. This results in

The configuration of each sub-grid is matched with one entry in the contours lookup table below: 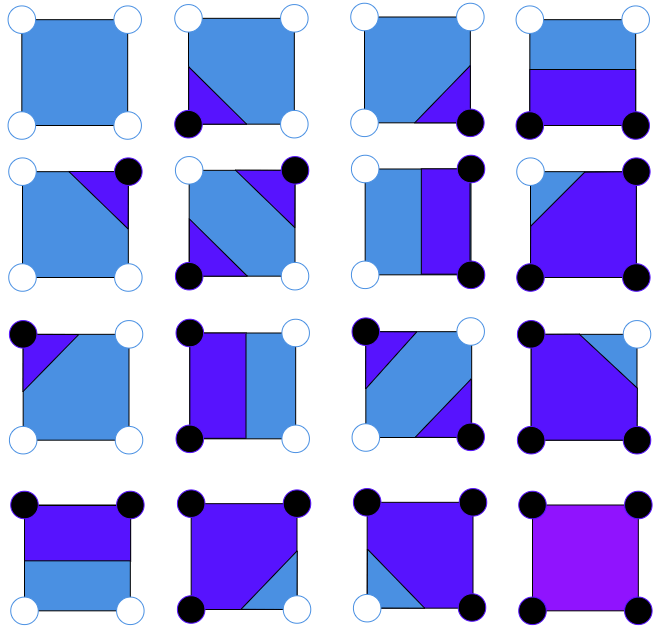 The contours lookup table is intuitive. As mentioned before, there are

state by a black vertex and the

state by a white vertex. We define a bipolar pair to be two vertices in opposite states.

Intuitively, the contour of an object must intersect the edge of a bipolar pair. Thus, the configuration

must correspond to an object whose contour intersects the top and left edges of the square. In this fashion, the contours in each sub-grid are approximated, as shown in the figure below:

The Marching Squares algorithm can be divided into two steps:

control the resolution of the sample. For example, if

, we select the sequence of pixel-values:

The result of this operation should yield a matrix of size

Each selected pixel value is compared with the iso-value

and converted to a bit-value

is used to hold the bit matrix. The actual

-coordinates of each pixel in the sample

is stored as a named tuple in a matrix

4.2. Marching the Squares In

Next, we march the squares in the binary grid

, beginning with its top-left corner, has vertices, in clockwise order :

. We compute the reference value

of each square. We also compute the mid-points of each square edge: north, east, south, and west. Finally, we determine the contour

by searching the reference value in the contours lookup table:

Here’s a topographical map of the Mont Blanc region in the Swiss Alps. The Marching Squares algorithm when executed on this image produces nice contours around the mountain peaks:

In this article, we learned about an interesting Computer Graphics algorithm called the Marching Squares. To summarize, it is based on two core ideas. First, the contours can be constructed piecewise within each grid square, without reference to other squares. Second, each isocontour segment in a grid square can be retrieved from a lookup table.