When dealing with string problems, we’ll come across a term called palindromes.

In this tutorial, we’ll show what a palindrome is. Also, we’ll explain Mahacher’s algorithm, which handles palindrome substrings inside a string

Finally, we’ll give some applications that use Manacher’s algorithm.

First of all, we need to define what a palindrome is. A palindrome string is the same when reading forward and backward. For example, strings { 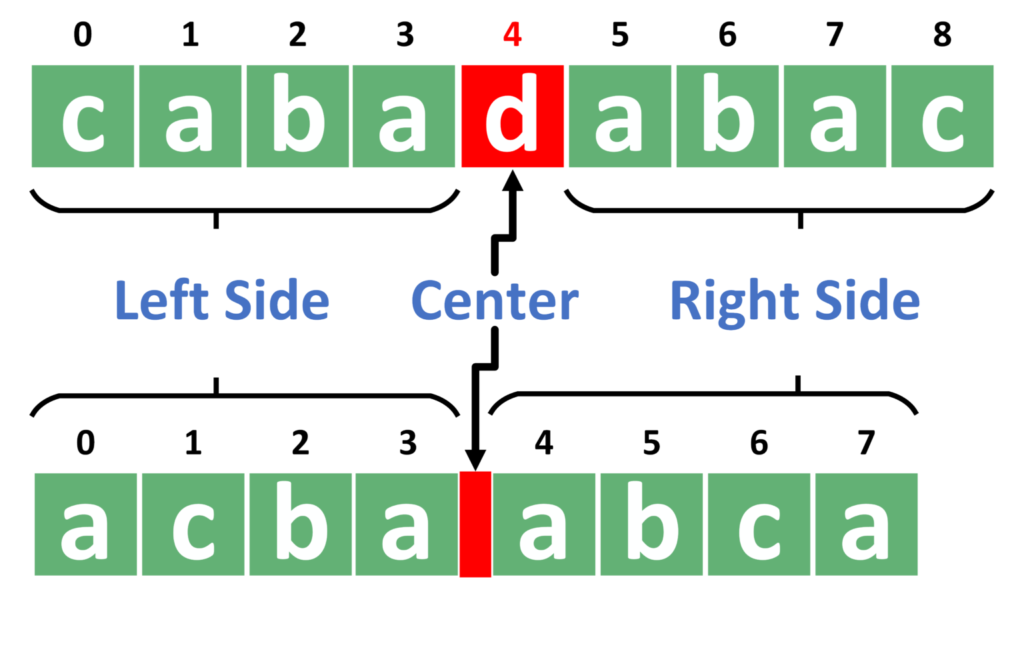 However, in the case of even-length palindromes, we don’t have a center element. Instead, we just have a left and right side of the palindrome.

In both cases, the right side of the palindrome is a mirror image of the left side. In other words, the left and right sides are the reverses of each other.

One more note to consider is that if a string

is a palindrome, then if we remove the first and last characters from

, we’ll get a palindrome string as well.

Similarly, if a string

is a palindrome, then adding the same character to the beginning and the end of

will result in a palindrome string as well.

These properties will prove useful once we have a look at the algorithms later.

Now that we have a better understanding of palindromes, we can explain the problem that Manacher’s algorithm solves.

In the beginning, the problem gives us a string

. After that, the problem asks us to calculate two arrays

. Both arrays should store an indication of the longest palindrome substrings (LPS) that are centered at each index

will be the longest even-length palindrome, such that the last character on its left side is at index

The naive approach is straightforward. From each index inside the string, it tries to expand both sides as long as possible.

Let’s take a look at the naive approach implementation:

We iterate over all possible indices

. For each index, we set

to zero. Also, we set

to the indexes of the next range to check.

Next, we check whether the current range forms a palindrome or not. The idea is that if the range

forms a palindrome, and we moved to the next range, which is

; we only need to check the characters at index

If the current range forms a palindrome, then we increase

by one. Also, we extend our range by one to the left and right sides.

After that, we perform a similar operation to calculate

array. The difference is that we pay attention to the initial values of

. The reason is that in even-length palindromes,

is the index of the last character on the left side of the palindrome substring. The rest is similar to calculating the

In the end, we return the calculated

is the length of the string

arrays in a similar way to the naive approach. However, if possible, it tries to use the already calculated values, rather than checking all the possible ranges from scratch.

Let’s explain the general idea first. After that, we can discuss implementation and complexity.

Let’s take the following example to explain the idea of odd-length palindromes better:

Suppose we’ve calculated all values of

from index 0 to 7, and we need to calculate

, we’ll keep the palindrome substring that ends as far to the right as possible so far. The reason for choosing the right-most range will be explained in section 4.4. In our example, that is the substring

, we can follow the naive approach. However, we can use the already calculated values to reduce the number of comparisons.

Since we know that the substring

is a palindrome, we can calculate the mirror image of index

based on the center of the range

. In this example, the center is index 6. Therefore, the mirror of

Since the left side is a mirror image of the right side, we might say that

However, there are two cases to consider. The first case is similar to the given example. We can extend

over the value of

. Therefore, we can start extending

from 2 and moving forward, without checking the value of

. In the example, we’ll get

The second case is given in the second example:

In this case, we can’t say that

corresponds to the range

, which is outside the range with

Therefore, we can only be sure of the value of

because it’s the maximum range contained in the range

. After that, we can try to extend the range following the naive approach. In this example, the range can’t be extended anymore.

In the beginning, we initialize

, indicating an empty range. Then, we iterate over the string

from left to right.

to the default value of the naive approach, which is zero. Now, we try to use already calculated values.

is inside the range

, we update the value of

to become the value of its mirror index. However, we pay attention to the case when the mirror index result becomes outside the range

Therefore, we take the minimum between

for the mirror index, and the maximum length we can take from the current palindrome range

is the mirror index of

, then it’s enough to check if

. The reason is that

is the mirror index of

. Therefore, it’s enough to check whether any of them is smaller than

for the mirror index.

Once we assigned the initial value to

, we simply follow the naive approach and try to expand the range centered at index

as far as possible. But, in this case, we start from

After that, we check whether we need to update the values of

. Since we need to store the palindrome range that goes as far to the right as possible, we check whether the current range is further to the right than the stored range. If so, we update the value of

Finally, we return the calculated array of

This algorithm is similar to algorithm 2. However, we change the initial values of

to fit with the next range to check. The reason is that even-length palindromes have two center indexes. In our implementation,

is the left index between the two center indexes.

After that, we try to extend the palindrome range as far as possible. We pay attention to start the comparison from the value of

, rather than starting it always from zero.

Once we’re finished, we update the currently stored right-most range.

Finally, we return the calculated array of

First of all, let’s prove the optimality of always keeping in hand the right-most palindrome substring. Suppose we were to keep a range whose right side is smaller. However, it’s a larger range, and its beginning is further to the left than the stored range.

In this case, we’ll minimize the value of

that we consider when calculating either

. Hence, we might end up with a smaller initial value for

. As a result, we’ll end up performing more comparisons than we’re supposed to.

From that, we can conclude that keeping the right-most range is always optimal.

At first glance, we might think that complexity is similar to the naive approach. However, a closer inspection will show us that, every time, we start

, then the range won’t be extended any more. The reason is that if the range were to extend, the value

would’ve been larger because both sides of the range

are mirrors of each other.

Therefore, in this case, we won’t make any successful comparisons.

As a result, each successful comparison operation also results in a one-step movement for

forward. Also, we can notice that

Therefore, the inner while loop gets executed at most

times. Hence, the complexity of Manacher’s algorithm is

is the number of characters inside the string

Let’s examine a few applications where Manacher’s algorithm can be used.

Suppose the problem gives us a string

This is a straightforward application for Manacher’s algorithm. We simply calculate both arrays

as shown in algorithms 2 and 3.

Since these arrays store the longest palindrome substring for each index, we just need to check the values

. From all these values, the answer is the maximum possible among them.

The time complexity of the described approach is

is the length of string

Similarly, we calculate both arrays

as shown in algorithms 2 and 3. After that, we iterate over all possible values of these two arrays.

stores the length of each side of the longest palindrome substring. By removing the first and last character of each of these substrings, we get a new palindrome.

Hence, we should calculate:

Note that, we added one for each index

indicating that every single character is a palindrome of its own.

In addition, we need to calculate:

Finally, we should return the value of

The described solution can be implemented in

is the length of string

This problem is a little tricky and needs a good understanding of Manacher’s algorithm.

First of all, when we take the LPS value of the mirror of index

, this value corresponds to the exact same substring as the one at index

. We don’t need to calculate this value because it’s already been calculated when we were at the mirror index.

However, each extending operation might result in a new different substring. Note that, the expansion operation is done at most

We can use a hash function, similar to the one used in the Rabin-Karp algorithm. The hashing function can give us the hash value of a certain substring in constant time complexity. Therefore, we can calculate the hash value of all the substrings resulting from expansion operations in linear time.

Finally, the answer is the number of the resulting hash values without repetition. To do this, we can insert all the hash values into a hash-set. Then, the answer will be the size of the hash-set because it adds the same value only once.

This approach can be efficiently implemented in

is the length of the string

In this tutorial, we explained the term palindrome and discussed palindrome substrings inside a given string.

First of all, we explained the naive approach.

After that, we explained Manacher’s algorithm with both its versions that get the odd-length and even-length palindromes.

Finally, we presented some problems that can be solved using Manacher’s algorithm in linear time complexity.