In this tutorial, we’ll discuss the problem of finding the local minimum in a

First, we’ll define the problem and provide an example that explains it.

Second, we’ll present a naive approach and then improve it to obtain a better solution.

Suppose we have a

distinct integers. Our task is to find a local minimum in the given matrix.

Recall that a local minimum in a

matrix is the cell that has a value smaller than all its adjacent neighboring cells.

Let’s check an example for better understanding. Suppose we have the following 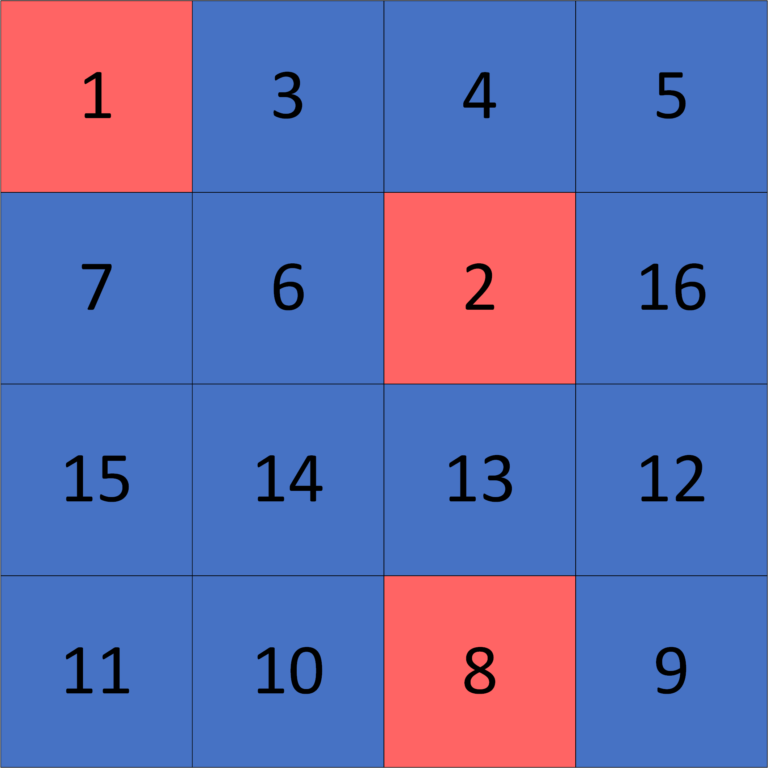 As we can see, there are three local minimum cells in our example:

Therefore, the answer to our example could be any cell of these three local minimum cells.

The main idea here is to always move to the smallest adjacent neighbor cell with a value smaller than the current cell value until we reach a local minimum.

To iterate over our matrix, we’ll use DFS (Depth First Search). Each time we reach a cell, we’ll check whether it’s a local minimum, which means that we’re done because we found a local minimum in the given

matrix. Otherwise, we’ll move to the cell with the smallest value among all the adjacent cells that have a value smaller than the current cell value.

Eventually, this must terminate because moving to a cell with a value smaller than the current cell value cannot go on forever.

function that will return the smallest adjacent neighbor cell with a value smaller than the current cell value. For each cell, there are four possible adjacent cells we have to check.

) and the current column (

), respectively. Then we declare

, which will represent the smallest adjacent cell. To begin, it’ll be equal to the

, which means a cell above the

one. Then we’ll check whether that cell’s value is smaller than the minimum value that we got so far. If so, we’ll update the

to be equal to the cell located above the

cell. We do the same process for the left, right, and down adjacent cells.

In the end, we return the

that we’ll move to in the next DFS traversal.

Then we declare the

function, which returns the local minimum in the given matrix. To start, we get the

that we’ll move to in the next DFS call. Second, we’ll check whether

cell, which means that the

cell. Otherwise, we move to the

in our DFS traversal.

The complexity of this approach is the same as the DFS complexity, which is

is the number of cells and

is the number of transitions. Thus, it’s

because the number of cells is

, while the number of transitions is a little less than

After we get the cell with the smallest value, we’ll get the

(smallest adjacent cell) of it. Now the sub-matrix that has the

, and that’s impossible because we’ve picked the cell that has the smallest value among all the

Let’s take a look at the following example for better understanding: 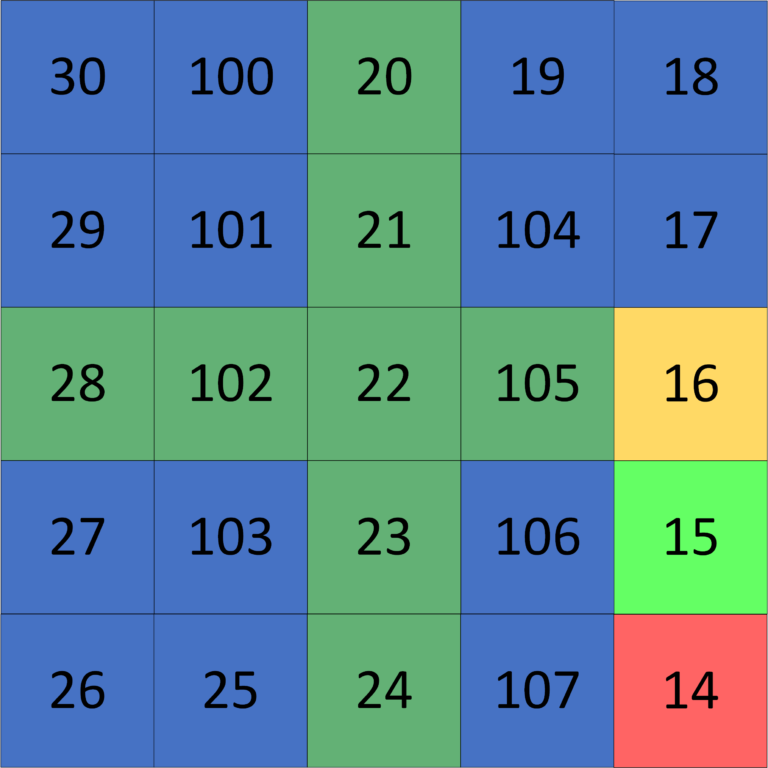 , which has the smallest value among all the

cells. Then we get the

of it which is

. So we can guarantee that the local minimum will be inside the

sub-matrix. Therefore, we solve our problem for the

sub-matrix and repeat the same process.

function that’ll take the given matrix and return a local minimum cell in it.

Then we declare the indices of the

. After that, we declare the

, representing the cell that has the smallest value among all the cells that lay in the

functions that return the minimum value in a certain row or column, respectively.

as we did in the previous approach to know in which sub-matrix our local minimum is located.

Now we’ll check if the

is equal to the

. In this case, it means the

is a local minimum, so we return it and finish the algorithm at this point.

, it means that our local minimum is either in the Top-Left or Top-Right sub-matrices. Therefore, we have to check whether the

Finally, we’ll check if the

is greater than or equal to the

, which means that our local minimum is either in the Bottom-Left or Bottom-Right sub-matrices. We check it in the same manner as we did in the previous conditions.

The complexity here is

In the first call, we iterate over

cells to get the

. However, in the second call, we iterate over

cells. After that, we iterate over

cells, and so on.

So the total number of iterations will be equal to

, which means the complexity is

In this article, we presented the problem of finding a local minimum in a

matrix. We explained the general idea and discussed two approaches.

First, we explained the naive one. Then we improved it to get the

approach, which was much faster than the first one.