Flowcharts are an excellent resource for systematically illustrating processes and algorithms. With flowcharts, we can define, for instance, conditional decisions and loopings in a visual and simple way.

LaTeX, in summary, is a system that uses tags and marks to format a document. Several packages are available for LaTeX, including different drawing packages. These drawing packages enable the users to create several graphical resources from scratch.

Among these packages, there exists the one called TikZ. TikZ is a vector drawing package for general use. In particular, TikZ provides multiple tools for drawing flowcharts.

In this tutorial, we will explore how to draw flowcharts using LaTeX/TikZ. At first, we’ll study the organization of a LaTeX/TikZ picture environment. So, we’ll see a set of TikZ elements usable for drawing flowcharts. Finally, we’ll have some examples of complete TikZ flowcharts.

Drawing with LaTeX/TikZ requires importing specific packages and organizing the environment with particular tags. In this way, this section presents how to prepare a LaTeX document to draw flowcharts with TikZ.

In our examples, we will use the following code as the base document to draw flowcharts:

Our base document uses the standalone class (line 1). Thus, the LaTeX compiler will create a PDF particularly for the TikZ image defined in the document. However, we can employ TikZ with other document classes with no problems, such as article and a4paper.

In the following line (2), we import the TikZ package to the LaTeX document. This importing line enables us to use the TikZ resources. Line 3, in turn, specifies that we’ll use the shapes and arrows library from TikZ.

Note that it is common to use TikZ to draw charts and graphs besides flowcharts.

Next, we can open the environments of our example document. Line 4 defines the beginning of the LaTeX document itself. Line 5, in turn, indicates the begging of a TikZ picture environment.

After opening our environments, we can define the TikZ image. In our example, line 6 represents the image definition. But, it is relevant to notice that this definition can have multiple lines.

Finally, lines 7 and 8 show the end of the TikZ picture environment (7) and the LaTeX document (8).

We highlight that, by default, the LaTeX compiler generates PDF documents. However, in the case of standalone images, it is possible to convert them to other file formats, such as PNG and JPG.

Creating flowcharts with TikZ consists of including graphical elements into an image. Thus, we must consider an image origin point as a referential to properly allocate these elements.

For drawing our flowcharts, we’ll consider the 2D coordinate system (X, Y) of the TikZ package. In the following image, we can see a simple cartesian plane system of TikZ: 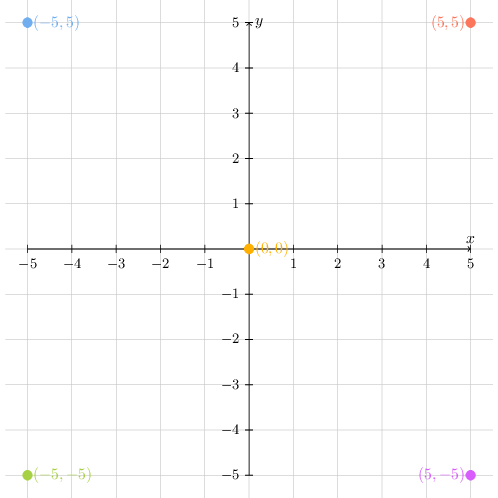 The origin of the cartesian plane of TikZ is at the middle of the image (yellow point). Taking the origin point as the referential, the coordinate system to locate graphical elements in the image behaves as follows:

There are several elements for drawing flowcharts. These elements are, at most, simple geometrical figures. In this section, we’ll explore some of these flowchart elements in the context of LaTeX and TikZ.

The terminator element indicates the beginning or end of a process. To define a terminator in TikZ, we can use the following definition command:

Next, we can see the terminator element image:

Finally, we can include this element as a node in a TikZ picture environment as follows:

We can reproduce the image in a TikZ picture environment with the subsequent command:

The image shown next depicts the decision element: 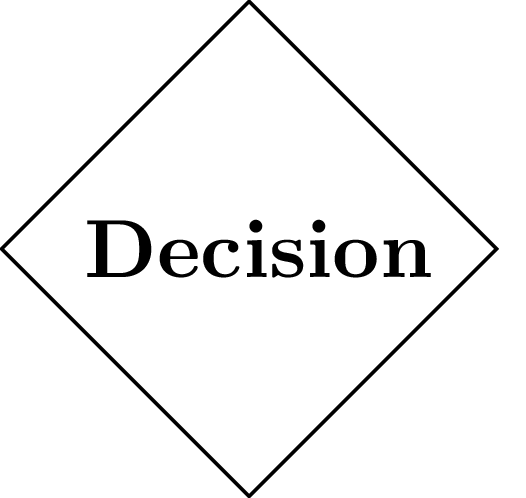 With the previous definitions done, we can insert the decision element in the flowchart using the following command:

The data element indicates an operation of input or output in the flowchart. So, this element means that data is being introduced to or provided by the system. A viable manner to define this element is presented next:

The image below demonstrates the data input/output element:

The following line inserts a data element into a flowchart:

We can use the subsequent line to produce a connector between two elements (e1-id as the origin and e2-id as the destination):

We highlight that the double hyphen between the elements indicates a straight line connecting them. To create curved lines in the flow chart, we can replace one hyphen with a pipe: |- or -|.

In this section, we’ll see different ways to create flowcharts using the elements shown in the previous section. At first, we’ll understand how to build a flowchart explicitly defining the coordinates of the elements. So, we’ll build the same flowchart through relative positions instead of explicit coordinates.

Using the coordinates, we can place the elements in any location of the TikZ cartesian plane with no restrictions. Thus, employing explicit coordinates makes the process of creating flowcharts very generic and customizable.

The image below depicts the flowchart generated by the previously presented code: 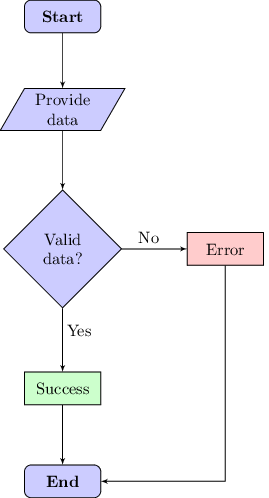 We also employed the node modifier fill to set colors for the elements. Furthermore, we used extra nodes for labeling specific connectors (no and yes).

Despite decreasing the customization possibilities compared to explicitly defining coordinates, the relative positioning of elements in a flowchart can bring several advantages.

Among these advantages, we can cite, for example, the intuitiveness of building flowcharts and the standardization of the distance between elements in the flowchart.

The image generated using the previously presented code is presented next:

It is relevant to note that the definition of coordinates got replaced with node positioning modifiers (below of, above of, right of, left of). So, we need to provide a referential allocate an element.

Furthermore, we employ the TikZ picture environment modifier of node distance to determine the standard distance between neighbor node centers.

Finally, we defined the coordinates of the labeling nodes (no and yes) once they demand a specific positioning on the image.

We can conclude that LaTeX/TikZ is a very versatile tool to create flowcharts. Specifically, the TikZ package library enables the user to create several forms natively, and its libraries provide several of these forms already defined.