In this tutorial, we’ll show how to check if a line segment intersects a rectangle.

Let’s say that the segment’s endpoints are

We say that the segment

So, the idea is to check if

. If we find an intersection with any side, we don’t need to check the rest.

3. The Intersection of Two Segments

So, let’s see how we can check if

. The steps will be the same for the three remaining sides.

, there will be at least one point

that belongs to both 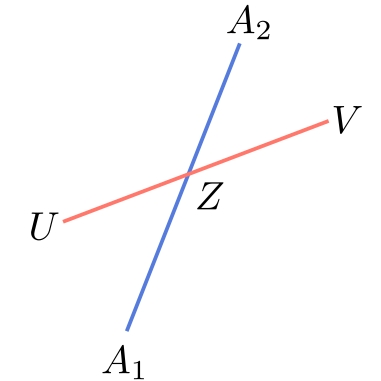 Focusing on the triangle

as vectors directed from the origin, we see that the following must hold:

belongs to both segments.

, we get a system of two linear equations:

The next step is to solve it for

If the system has no solution,

If there’s a unique solution such that

, then they intersect at a single point

If there’s more than one solution, we’ll get a range of values for

. If the ranges include values from

coincide at least partially. In particular, if the ranges are completely inside

So, we start with one side and check all the others iteratively until we either find an intersection or test all of them without success.

Since we deal with a fixed number of dimensions, solving systems takes

time, so the complexity of the entire algorithm is also

3.3. What If The Segment Is Inside The Rectangle?

has a mutual point with the rectangle’s boundary.

On the other hand, if we want to cover the rectangle’s interior, we need to extend our algorithm. The already formulated pseudocode deals with all the cases except when

lies inside the interior of

To handle it, we note that

is inside the rectangle only if

are linear combinations of the rectangle’s directed non-parallel sides such that all the coefficients are between 0 and 1: 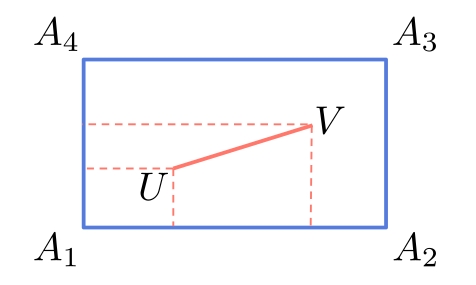 We can take any two adjacent sides as the vectors as long as we direct them so that the interior points have positive coefficients.

To check that, we solve two linear systems we derive from:

If both have single solutions

is in the interior of

In this article, we talked about how to check if a line segment intersects with a rectangle. We differentiated between two cases: in the first one, we considered if the segment intersects the rectangle’s boundary, and in the second one, the case where we covered the intersections with the interior as well.