In this tutorial, we’ll first discuss the paging technique responsible for memory management in the operating system. Then, we’ll present the fragmentation problem and its two variations. Finally, we’ll talk about the core differences between the two variations of fragmentation.

Finally, we’ll explain why only internal fragmentation occurs in paging.

Paging allows us to store processes in memory in a discontinuous space. To implement this technique, we divide the processes into pages. Pages are blocks of fixed sizes. Similarly, we also divide physical memory into frames.

When executing a process, the CPU converts each page’s logical address to a physical address. Then, using the segmented paging technique, we partition the address provided by the CPU into a page number and a page offset.

If the virtual address is large, pages will take a large space in actual memory in paging. Complex programs tend to be large and take a lot of memory. Hence, managing the main memory with paging is a difficult task for an OS.

CPU extracts the frame number of each page from the segment table to find them in the physical memory. The offset helps to find the size of the frames, which is already determined: 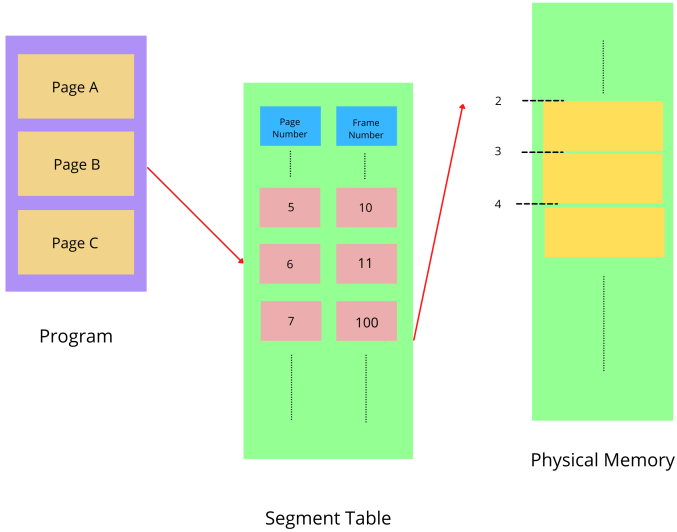 3. Fragmentation and Its Variations

Fragmentation occurs when we break the memory into small-sized blocks. Furthermore, fragmentations are non-contiguous in nature. Hence, we can’t allocate them to processes. As a result, memory will have multiple unused blocks while processes are pending in the queue and waiting for the memory. Fragmentation can be either internal or external.

Internal fragmentation occurs when we split the physical memory into contiguous mounted-sized blocks and allocate memory for a process that can be larger than the memory requested. Hence, the unused allocated space is left and can’t be used by other processes. Best fit block search is the solution for internal fragmentation.

External fragmentation occurs when total unused memory space is enough to answer all the allocation requests. Here the memory is non-contiguous. Therefore, the memory has empty blocks scattered all over, which are insufficient to be allocated to other programs. Compaction is the solution for external fragmentation.

4. Differences Between Internal and External Fragmentation

Let’s talk about the main differences between these two types of fragmentation:

We already know paging divides programs into fixed-size pages. However, at some point, it would occur that a program wouldn’t need precisely the whole page. Therefore, it can leave a free partition of the memory, leading to memory with allocated unused spaces. This is precisely how internal fragmentation occurs in memory.

Let’s take an example. We’re taking a program that is divided into two blocks of equal size 2KB each. Hence, we allocate 4KB of non-contiguous space in the memory. But if a program needs only 3KB, then an allocated and unused 1KB space is left on memory, causing internal fragmentation: 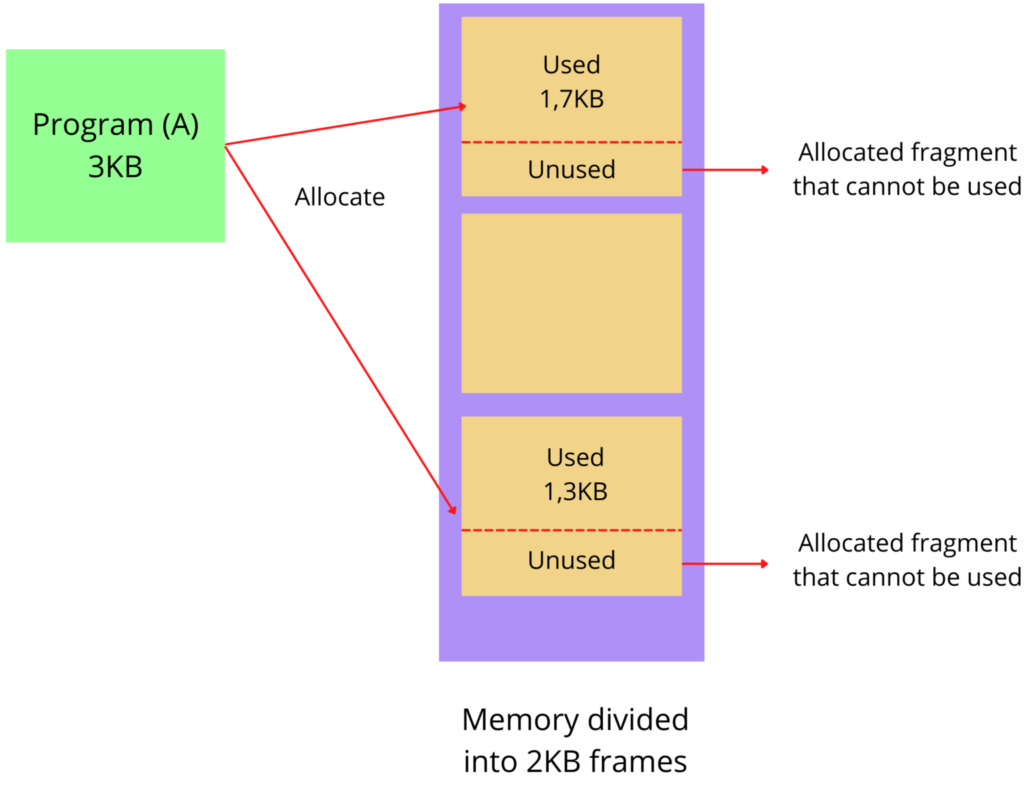 6. Can External Fragmentation Occur in Paging?

When dividing programs into fixed-size pages, we also divide physical memory into equal size frames. The particularity of this technique is that the space allocated for programs is non-contiguous. Therefore, when other processes don’t allocate non-contiguous blocks, they can be used by other programs. Paging allows them to use non-contiguous memory blocks.

Let’s take an example. First, we divide a program into two non-contiguous fixed-size blocks. Then, any other programs can use the remaining blocks that are not allocated: 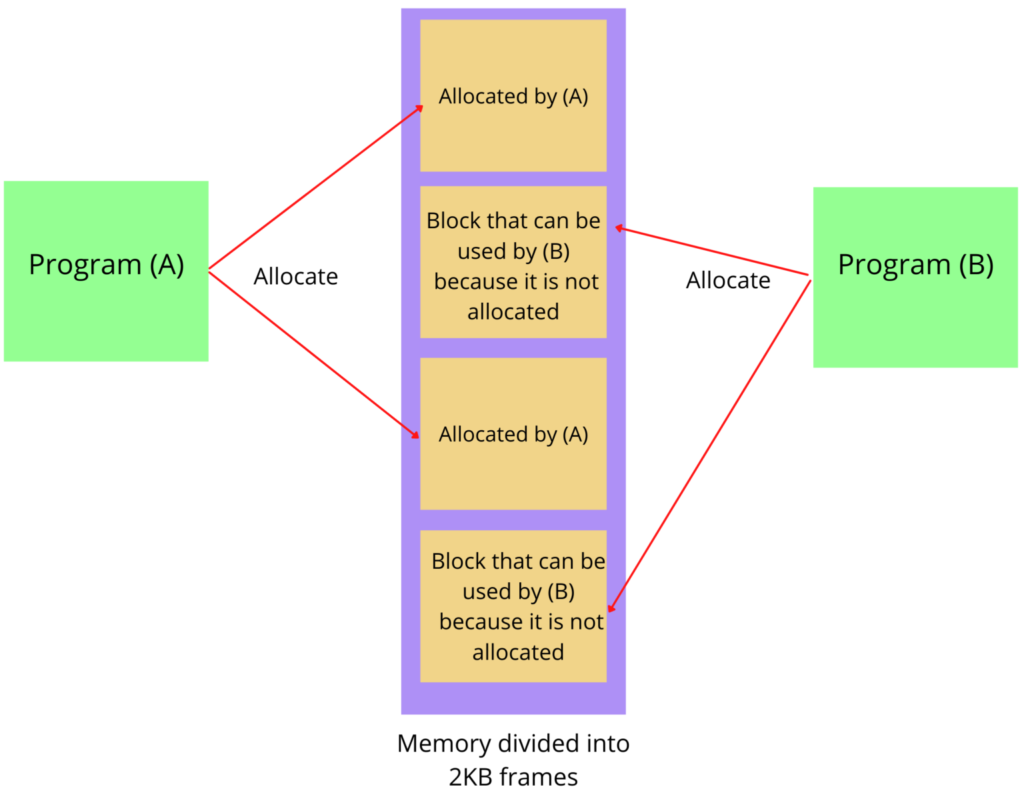 Now let’s merge the external and internal fragmentation examples into one so that we can get a clear idea: 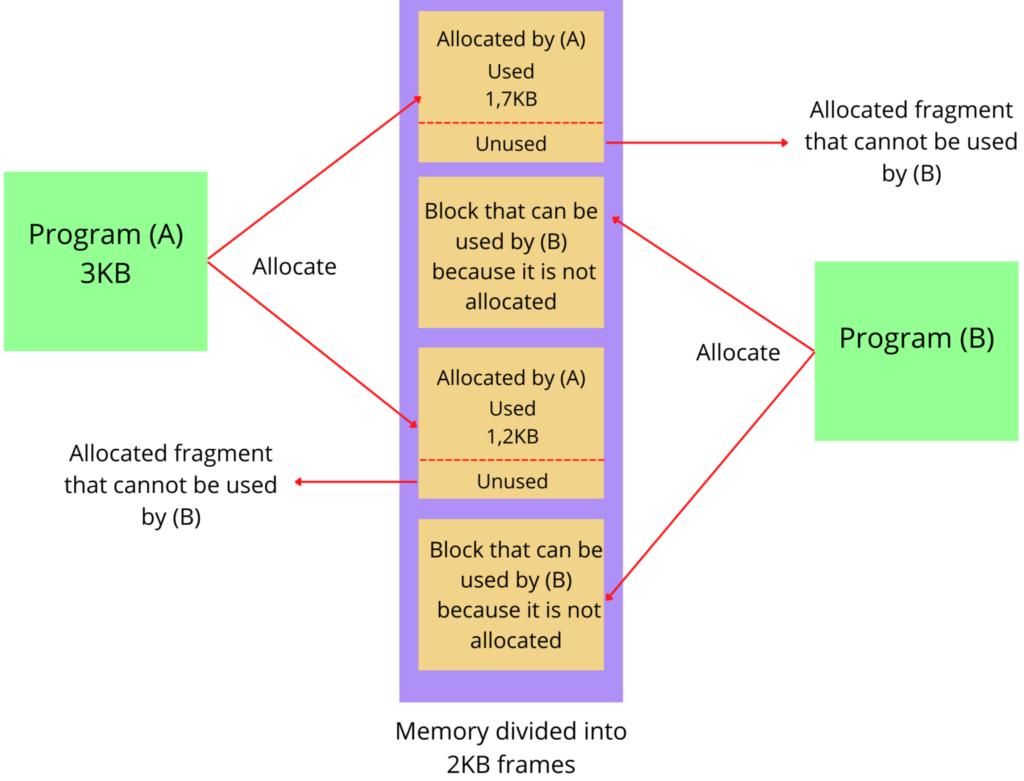