In this tutorial, we’ll learn about the gravity sort algorithm, also known as bead sort.

We use many sorting algorithms to arrange data in a particular order in our applications. Gravity sort is a natural sorting algorithm because natural phenomena – in this case, the force of gravity – inspired its design and development.

Natural sorting algorithms show us that we can develop ideas by observing nature. We can also learn a lot from the challenges of adapting such algorithms to software.

Gravity sort was developed in 2002 by Joshua J. Arulanandham, Cristian S. Calude, and Michael J. Dinneen. Natural events inspired the researchers to develop an algorithm for sorting positive integers. As they observed in their research paper, the force of gravity creates a “natural comparison” between positive integers that results in a sorted list. In other words, by simulating gravity on a list of positive integers, we can sort them.

To understand this, let’s represent positive integers as sets of beads suspended on abacus rods. For example, as we see in the image on the left, we’d represent the number three by hovering three beads in the air across three rods and the number two as two beads across two rods. When gravity acts upon the beads, any bead without another bead under it will fall. We can see the result of this below in the image on the right:

After the third bead of the number three has fallen, it’s now part of the bottom number. The resulting state of the abacus represents the same set of positive integers, but gravity has sorted those integers in ascending order. 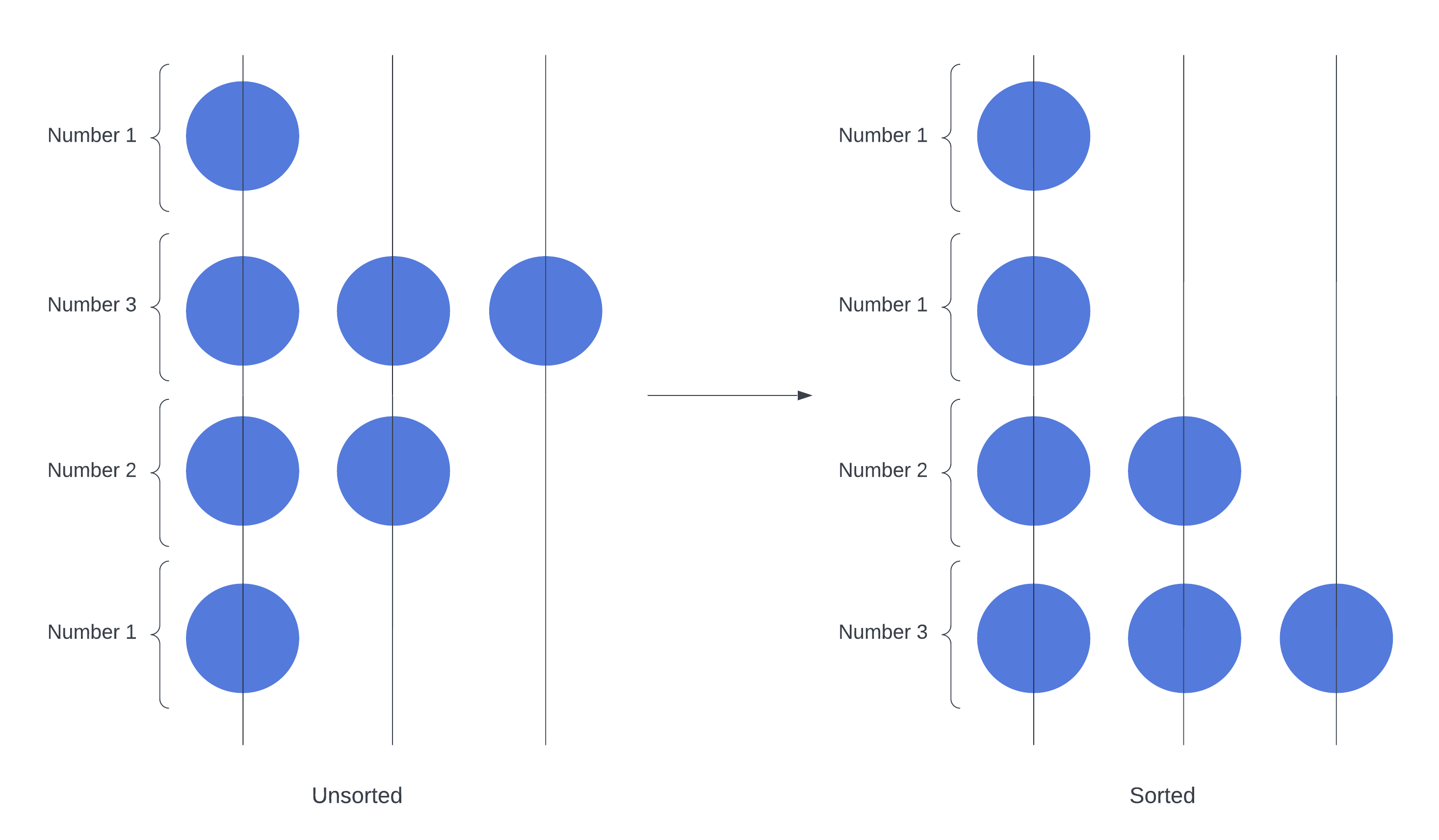 The image to the left represents the unsorted list of numbers. From top to bottom, the numbers are

. On the right, we can see the final state after the beads have fallen down the rods:

. Gravity has sorted our numbers.

Let’s look at how we can model this phenomenon in software.

To simulate an abacus, we use a 2D matrix to represent a system of vertical rods and horizontal levels. The state of a given cell is either occupied or empty based on whether it contains a bead. An on-bit indicates a bead is in the cell, and an off-bit is an empty cell.

is the biggest number in

, the abacus will have at least

levels in the matrix.

Let’s walk through a specific example using the list

to create the initial state of the matrix: 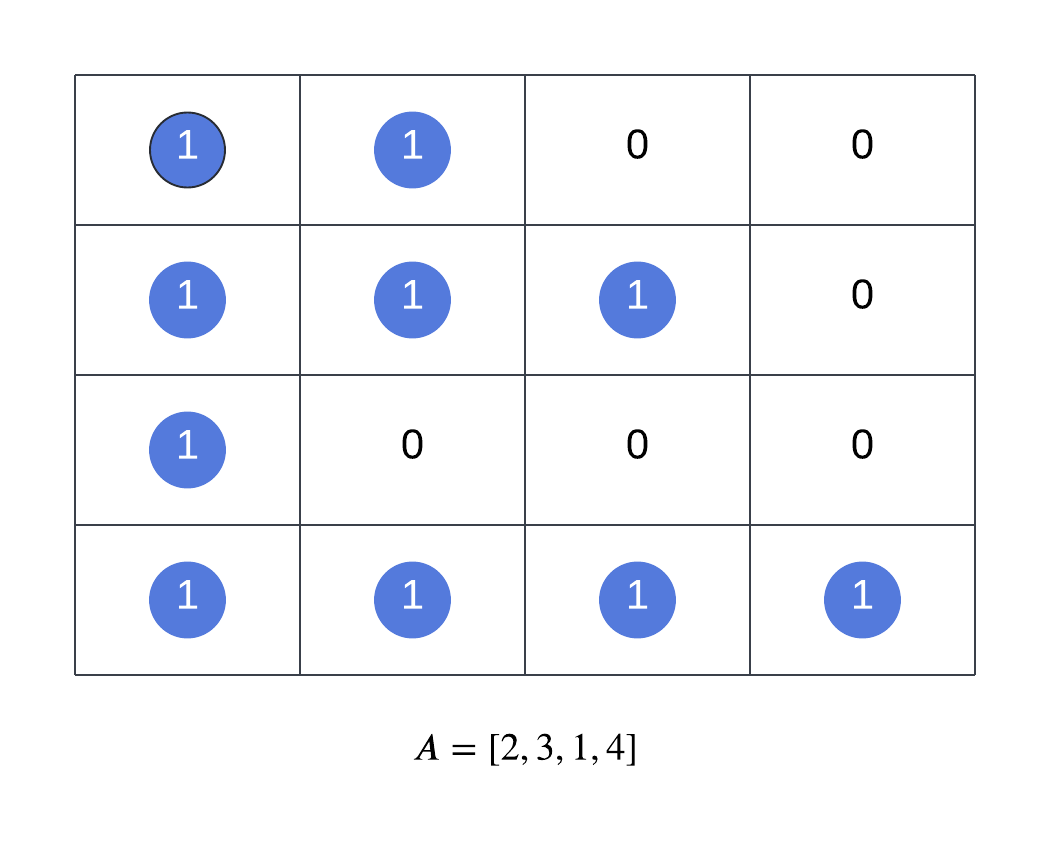 is the current level at each passing of the gravity sort algorithm, the matrix evolves as follows: 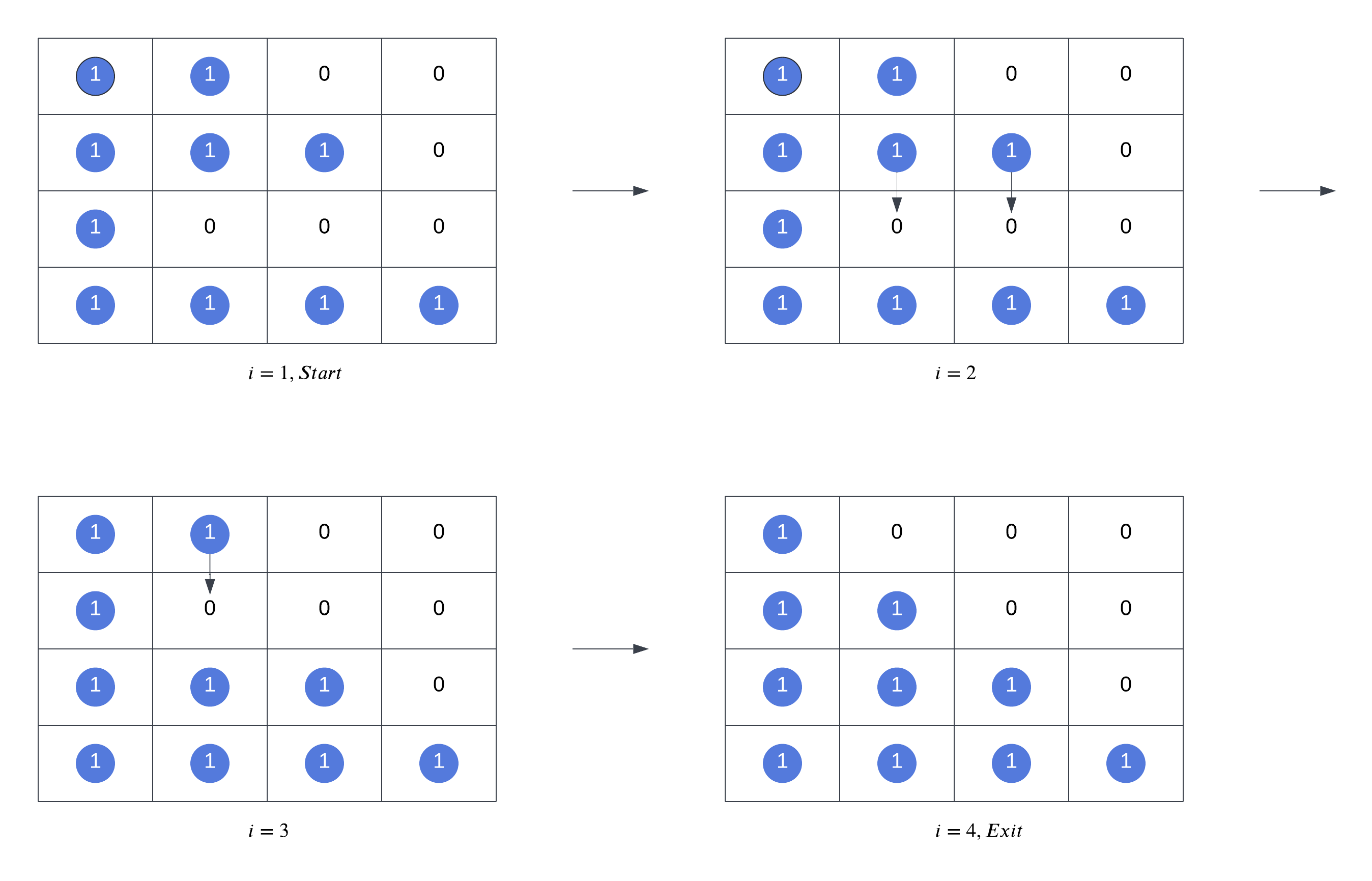 and the beads represent the input numbers in each row. Next, the beads at row

becomes 4, the matrix is at its final state with the beads sorted and we exit.

Here’s the pseudocode for gravity sort:

positive integers. Then, we can derive the number of rows and columns for our matrix

, representing the rods and levels of the abacus. The total number of rows is the same as

. Finally, the number of columns in

is the same as

, the maximum number in

, we loop through all rows and columns in the matrix. Every iteration of the outer loop drops the beads at the

, we must temporarily store the current level of the bead: we call this variable

in the pseudocode. Subsequently, if the cell below

is empty, we drop the bead by swapping the cell values in levels

.
The final state of

represents a sorted sequence of numbers. To create our list of sorted numbers, we count the number of beads at every matrix level, starting at the top.

Next, let’s analyze the time and space complexity of the gravity sort algorithm.

Gravity sort is not the most performant algorithm for software implementations. Although it can achieve a linear

time complexity with parallel threads, it would require a complex multi-threaded implementation. In this scenario, all columns will drop the beads simultaneously to their lowest possible position, in separate threads and one row at a time. Nonetheless, this is a more realistic approach for a hardware implementation where rows move one at a time.

In a single-threaded software implementation, we must visit every matrix cell instead of processing one row at a time. First, initializing the matrix is an

operation. Then, every row of beads requires traversing at most

cells. Furthermore, we simulate the beads falling at most

levels in every column. Overall, because we loop through every cell in the matrix and drop the bead to the lowest possible position, our algorithm results in a

respectively, the space complexity is

In this article, we learned about the natural sorting algorithm known as gravity sort or bead sort. To model this algorithm in software, we used a 2d matrix to represent our abacus beads and then simulated the force of gravity causing the beads to fall.

Gravity sort is an example of how software solutions can be derived from natural events and how we can express them in code.