There are various optimization algorithms in computer science, and the Grasshopper Optimization Algorithm (GOA) is one of them. In this tutorial, we’ll take a look at what this algorithm means and what it does.

Then, we’ll go through the steps of the GOA algorithm. In addition to a numerical example demonstrating the solution of an optimization issue using GOA, we’ll discuss its benefits and drawbacks.

2. What Is the Grasshopper Optimization Algorithm?

GOA is a meta-heuristics algorithm and a population-based algorithm. As implied by the name, this algorithm was proposed for solving numerical optimization issues by Saremi and Mirjalili, 2017. It’s a recent swarm intelligence algorithm. The inspiration for GOA comes, in particular, from the behavior and the interaction of grasshopper swarms in nature.

3. Who Are the Grasshoppers?

Grasshoppers are harmful and destructive insects because of the extensive damage they cause to crops. Let’s take a look at the life cycle of grasshoppers, which has three phases:

In short, the Grasshopper life cycle may resemble the image below: 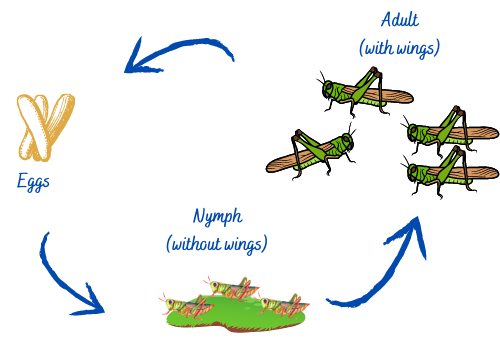 Let’s now investigate the main characteristic of the grasshopper swarm:

represents the social interaction between the solution and the other grasshoppers,

represents the gravity force on the solution, and

are random numbers in [0, 1]. Let’s now have a look at the model of each force used in Equation 1.

Let’s firstly start with the force of social interaction

. The equation below represents the social interaction between the solution and the other grasshoppers:

represents the distance between

represents the unit vector. In addition,

represents the strength of two social forces (repulsion and attraction between grasshoppers), where

is the attractive length scale and

is the intensity of attraction. In fact, these cofficients

have a great impact in the social behavior of grasshoppers.

Let’s dig a little deeper into the strength of these social forces. When the distance between two grasshoppers is between

, repulsion occurs, and when the distance between two grasshoppers is

, neither attraction nor repulsion occurs, which form a comfort zone. When the distance exceeds

, the attraction force increases, then progressively decreases until it reaches

. In order to solve this problem, we map the distance of grasshoppers in the interval

. The graph below explains the social interaction in more detail: 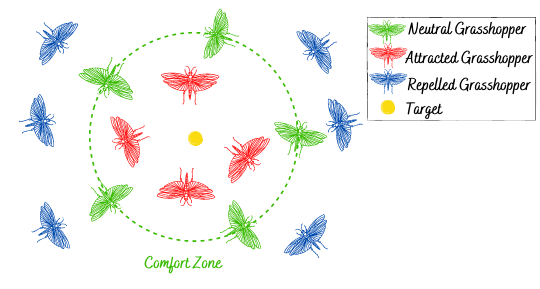 represents the gravitational constant and

is unit vector toward center of earth.

. The equation below shows how to compute

represents the drift constant and

is the unit vector in the wind direction.

In order to solve optimization issues and prevent grasshoppers from quickly reaching their comfort zone and the swarm from failing to converge to the target location (global optimum), we’ll make some modifications in Equation 7:

is the best solution in the

are the upper and lower bounds in the

represents the decreasing coefficient, and it is in charge of decreasing the comfort zone, repulsion zone, and attraction zone. In order to balance the exploration and the exploitation phases using the grasshopper approach, the coefficient

decreases according to the number of iterations. Here’s the model for

are the maximum and minimum values of

is the current iteration, and

is the maximum number of iterations.

Let’s now take a look at the implementation of the GOA optimizer:

As we can see in the algorithm, we start by initializing the parameters {

} and the grasshopper population

. Then, we evaluate each solution by calculating its value using the fitness function. After evaluating each solution in the population, we assign the best solution according to its value. Afterward, we update the coefficient parameter

to shrink the attraction, repulsion, and comfort zones (Equation 9).

(Equation 4) divides the search space into repulsion, comfort, and attraction zones. As explained in Section 4.1, when the function

fails to apply forces between the grasshoppers, we map the distance in the interval

In the case of a grasshopper violating the boundaries after updating the solution, we bring the grasshopper back to its domain. Then, we repeat the previous three steps for each solution in the population.

Afterward, we update and evaluate each solution to assign the best one in the population. We repeat the overall operations until we reach

the maximum number of iterations to return the best global solution.

It is worth noting that the time complexity of the grasshopper algorithm is generally related to the number of iterations and the number of agents. So,

represents the time complexity of this algorithm with

is the number of agents and

is the number of iterations.

To understand the grasshopper optimizer algorithm, we use a numerical example.

Firstly, we randomly initialize the population of grasshopper

. Afterward, we initialize all the parameters

using a random set of values:

Here’s the fitness function in order to calculate the fitness value for each grasshopper:

Let’s calculate the fitness value for each grasshopper in the current population using the fitness function:

6.3. Optimal Solution and Check the Condition

is the best solution for the first iteration. Let’s move forward to check the

condition. Notice that the number of iteration

. As a result, we move to the next step.

6.4. Normalization of the Distance

We need to compute

in order to normalize the distance between grasshoppers using the equations below:

Here’s the result of normalizing the distance between grasshoppers:

Before computing the new fitness value, we bring the current grasshopper back if it goes outside boundaries

. The table in section 6.5 shows that all grasshoppers are within the boundary. So, let’s now compute the new fitness values for each grasshopper in the current population:

and we increment the counter. Then, we repeat the

. The fitness values for each iteration are presented in the tables below:

7. Advantages and Disadvantages of GOA Algorithm

In this article, we discussed the grasshopper optimization algorithm using a numerical example to unlock its mechanism. This algorithm searches for an optimal global solution to a problem using the swarm population in nature. We introduced this algorithm because it’s highly effective in solving global unconstrained and constrained optimization issues.