Fourier Analysis has taken the heed of most researchers in the last two centuries. One can argue that Fourier Transform shows up in more applications than Joseph Fourier would have imagined himself!

We discuss the intuition behind both and present two real-world use cases showing its importance.

Expanding a Function into a summation of simpler constituent Functions has redirected several scientists to tune into understanding numerous fields, e.g., overtones, wireless frequencies, harmonics, beats, and band filters. When Fourier first introduced his analysis and the possibility of expressing a periodic function (e.g.,

) using a sum of periodic functions, he ran into multiple criticisms.

For example, Laplace (who was “the” physicist of his time) could not believe that a

series could express a

. In 1811, Fourier resubmitted his work with an important addition, the Fourier Transform, which showed that not exclusively it is possible to expand Periodic Functions but non-Periodic ones too.

The study of Linear Systems and Signal Processing recognized the importance of Fourier Transforms. However, it did not reflect on numerical computation because of the number of arithmetic operations needed to calculate the discrete version of the Fourier Transform. At least that was the case until James Cooley and John Tukey introduced the Fast Fourier Transform algorithm.

The Discrete Fourier Transform of

points is given by:

and its powers construct the Fourier Transform. Although

has two forms, using the exponential one (

) should serve us better in understanding its behavior.

will be the first root.

The figure below shows the eight different roots where

is the first blue line, making a 45 degree (

), and each of the following blue lines (also where the annotations are) will be the 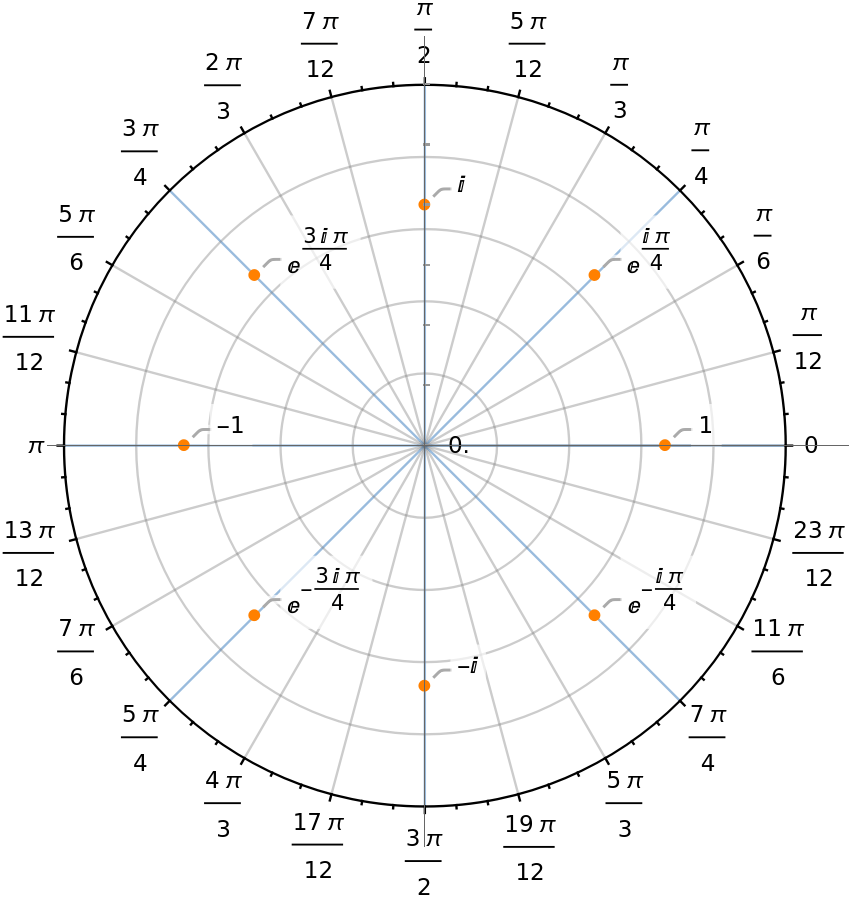 We can think of the multiplication between the different powers of

and the input sequence as asking each

to capture the frequency it senses from the current input sequence. When the sum is infinite (i.e., having too many

‘s sensing the frequencies), it converges to the exact input sequence:

(complex) additions. Hence, the complexity of total computation is

The observation made by Cooley and Tukey was that if

is a composite number, a reduction in complexity exists. We can notice that as we square 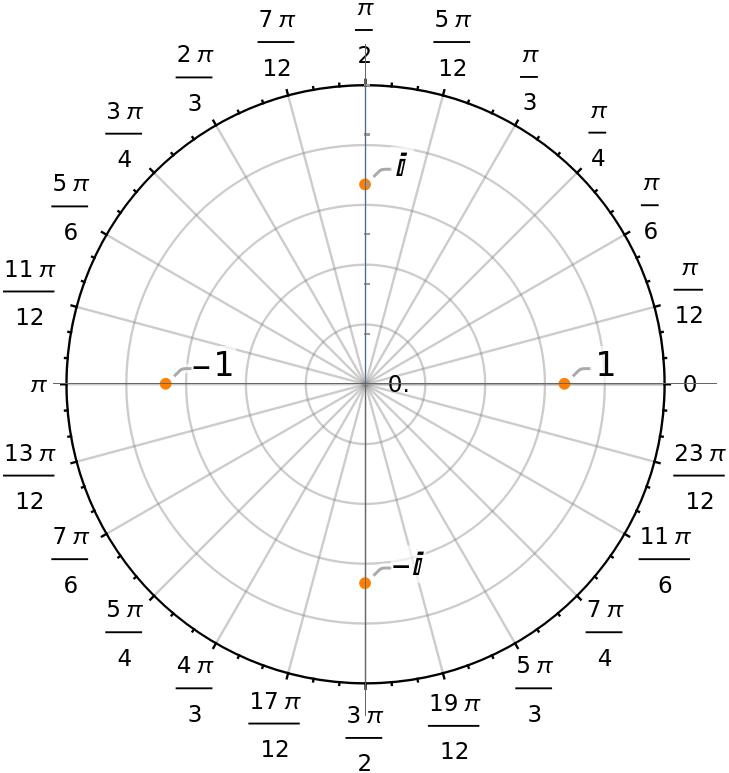 To start our optimization attempt, it would be easier to work with and understand the vector notation of DFT:

is a mesmerizing matrix; we construct it, multiply it by a sequence, and get the Fourier Transform of that sequence. But, we want to multiply

as quickly as possible.

Normally, such multiplication would take

, and the optimization is possible if the matrix contained zeros, but the Fourier matrix has no zeros!

However, it is possible to make use of the special pattern

we previously learned so that

can be factored in a way that produces many zeros (a.k.a FFT). The key idea is to connect

So, we are somehow trying to reduce the number of operations by half, but these two matrices are not equal, yet. How about we add a permutation matrix that splits the input sequence into odd and even coordinates?

At this point, we succeeded in producing a lot of zeros, but the factorized version seems far from being equal to the original

. However, we are pretty close, only if we can find a “fix-up matrix” to correct the previous output.

matrices. The form of that matrix is:

is a diagonal matrix with entries

is the identity matrix:

The full form would be:

What comes next? We reduced

. That’s recursion! There are

multiplications from the diagonal

‘s, to reassemble the half-size outputs from the lower levels. This yields the final count

is not a power of

, we can pad the input sequence with

multiplications, where FFT would perform

Fourier Transform has an indispensable number of applications to be listed. We’ll cast a shadow on Acoustics and Convolution Theorem.

How can Shazam recognize a song/music in a matter of seconds? More surprisingly, it does so regardless it is listening to an intro, verse, or chorus: 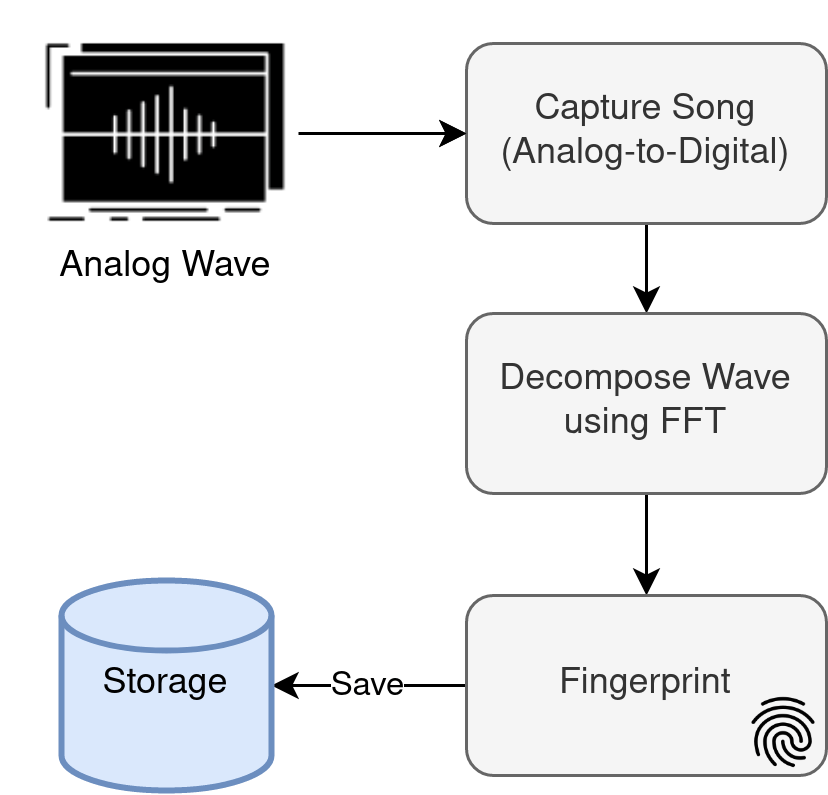 There are (roughly) four steps it performs:

The theorem states that circular convolutions (i.e., periodic convolutions between two periodic functions having the same period) in the spatial domain are equivalent to point-wise products in the Fourier domain.

denote the Fourier Transform and

its inverse, we can compute convolutions between functions

Originally, the convolution between

A convolution of size

with a kernel size

operations using the direct method, the complexity would be

. On the other hand, FFT-based method would need

The convolution operation is used in a wide variety of applications such as:

In this tutorial, we have provided a short mathematical analysis of the Fast Fourier Transform algorithm and how it can, surprisingly, impact a lot of fields and applications. The breakthrough of the algorithm only started a few decades ago even though Joseph Fourier introduced his analysis almost two centuries back.