In this tutorial, we’ll cover the Disjoint Set Union (DSU) data structure, which is also called the Union-Find data structure. Initially, we have a universe

, and we’re interested in separating elements into independent (non-intersecting) sets. Additionally, we must support the union operation of two sets. Lastly, for any given element, we must be able to find the set it belongs to.

Usually, the applications that use DSU are interested in two types of queries:

To support such queries, DSU defines the following operations:

Let’s understand how the two types of queries can be answered by supporting the defined operations.

is called initially for each element of the universe to put in its own set. When we’re trying to decide if two elements are in the same set for the check query, we perform

, and if the returned values match, then they’re in the same set. The union query is covered by simply performing the

Additionally, a tree node contains a set element and a link to the parent node. The parent of the root node is the root itself. Following this idea, the representative of a set can be found by following the parent links up the tree, starting from any node until we get to the root node.

Let’s walk over the process of forest construction. Assume we have a universe

that will be used to construct DSU as a forest of trees. Originally, we put each element in its own independent set, thus, initially, we get six trees in the forest by performing six operations

. Let’s unite some of the sets. First, let’s perform

. The resulting forest is:

belong to the same set, and

is the representative of that set, so

. We get the forest: 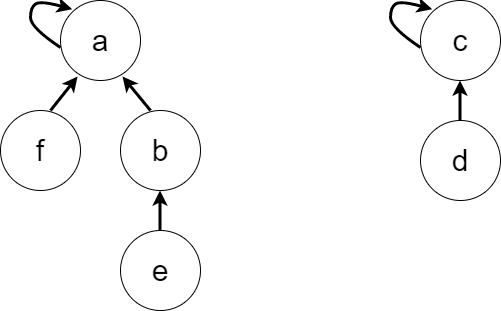 4. Pseudocode for the Naive Versions of the Operations

The Naive versions of the operations implement the ideas discussed so far.

simply creates a tree with a single node for the element

, and the parent link of the node points to itself. For clarity, we’d need an auxiliary operation

, which creates the initial node of a tree:

is as simple as:

belongs. To achieve that, we start from the node containing the element

and follow the parent links until we find a node

appends the root of the

tree to the root of the

5. The Complexity of the Operations

into the created root node.

is a linear operation. Indeed, its complexity depends on the height of the tree to which

belongs, and we can come up with a sequence of

operations which build a long linear tree. Thus, the naive

is the size of the universe

operation as it relies on

to perform its duty, and besides that it performs

work by reassigning the parent link of the

As we see, the bottleneck operation holding DSU back from being a constant time data structure is

. Thus, let’s see what optimizations we can perform to make the operation faster.

The first idea is to shorten the tree height during the

operation. To do that, we change the parents of all the nodes on the path from 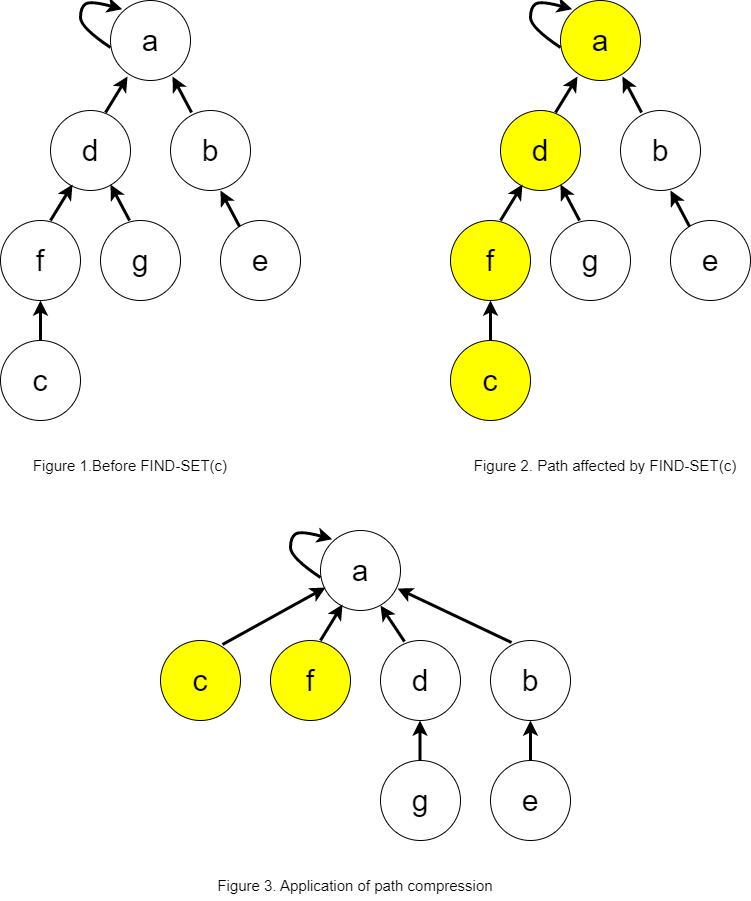 In ‘Figure 1’, we can see the tree prior to performing

. Finally, ‘Figure 3’ shows the effect of the path compression heuristics and the marked nodes are the ones which paths have been shortened.

Of course, we could implement

iteratively, but the recursive version is shorter and more readable.

The second optimization occurs during the

operation. While in the naive implementation of

we simply hang the

tree on the root of the

To have a criterion for deciding how to unite two trees, we define the notion of the tree rank. We may define the rank of a tree to be the size of the tree (the number of nodes), though some references define the rank to be the upper bound of the tree’s height. Regardless of the rank selection approach, we hang the tree with the smaller rank to the root of the tree with the bigger rank. When the ranks are equal, we can select the tree to be hung arbitrarily. Also, let’s pay attention to the fact that path compression doesn’t change tree ranks regardless of the rank selection approach.

For our discussion, let’s choose the tree-size approach for the rank. The example below demonstrates the union by rank heuristics: 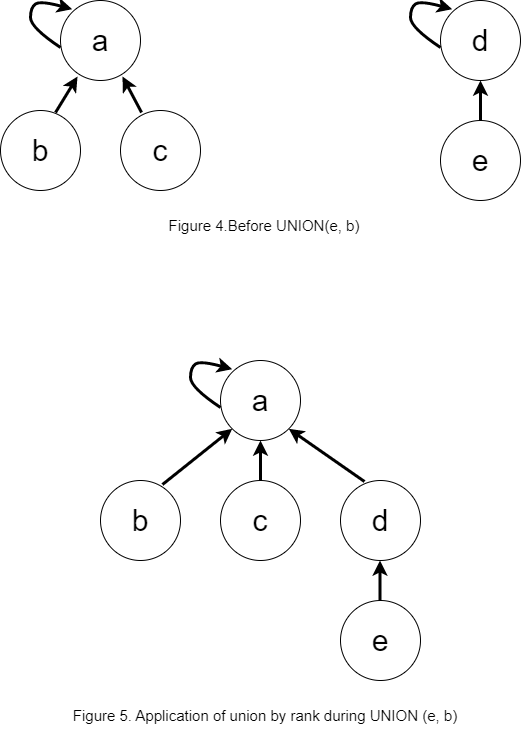 with union by rank takes the form:

Though the union by rank heuristics is performed in the

operation, it speeds up

is optimized indirectly as it depends on

7. The Complexity of the Operations with the Optimizations

The modified operations with the optimizations applied are estimated using the amortized analysis. We’ll only provide the results of optimizations without digging into the details of complexity analysis as it’s vast and complex.

It turns out that each optimization separately speeds up the operations. But when the two optimizations are applied together, they make the DSU operations run in

is the inverse Ackermann function.

. Thus, practically all the DSU operations run in constant time on average.

A detailed analysis of the complexity can be found in chapter 21.4 of the book “Introduction to Algorithms, third edition” by Thomas H. Cormen et al.

There are some practical applications of DSU in graph problems. Let’s denote an undirected graph by

, the graph vertices by

, and the graph edges by

. We’ll assume the graph has

8.1. Finding the Connected Components of an Undirected Graph

The problem of finding the connected components appear in various applications. For example, imagine a black-and-white picture where we want to count the number of black regions. The pixels of the image can be treated as vertices of the graph, and two adjacent pixels are connected with the edge if they have the same color. We can solve the problem using DSU.

The algorithm of finding the connected components is simple: initialize DSU with

. Then, iterate over the edges of the graph and unite the sets of the two vertices of each edge. In the end, each set represents a connected component:

Additionally, we might need to perform a linear scan over the vertices of the graph to see which connected component each vertex belongs to. The algorithm complexity is

8.2. Usage of DSU in Kruskal’s Algorithm

time. DSU improves the asymptotic to be

In Kruskal’s algorithm, we first sort the edges by their weights in increasing order. Then, we iterate over the sorted edges in increasing order of weights, and we unite the sets of each edge’s vertices if they are in different sets (connected components). In a connected undirected graph, there can be a maximum of

union operations, after which we get the minimum spanning tree:

In this article, we introduced the DSU data structure, defined its operations, and described the best representation of DSU as a forest of trees. Then we demonstrated ways to optimize the operations to create a near-constant time data structure. Additionally, we showed some of the applications of DSU in graph problems.